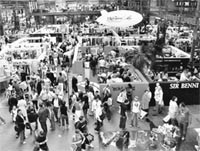 A flurry of development has hit the German trade show scene. Fairs here are both expanding and contracting, as well as refocusing their profiles as the competition heats up for dwindling German manufacturer and retail interest.

The rivalry between Berlin and Düsseldorf is also at a high pitch. Last year’s exciting start of the Bread & Butter and Premium Sportswear Couture exhibitions in the German capital made the rumbles of growing ennui and discontent at cpd in Düsseldorf seem all that much louder. There are now several other new upstart events in Berlin, and Munich is also trying to assert its presence via fledgling shows catering to specific audiences. On the other hand, Cologne — once the bastion of the German men’s wear and children’s market — has almost faded away as a major trade show venue.

Underlying all the proceedings, however, is a troubled German economy that’s not getting better quickly — if at all — plus a continued downturn in consumer spending and an ongoing consolidation at both the manufacturing and retail levels. Although Germany is still Europe’s largest apparel market, there are more and more show producers trying to get a piece of a smaller pie.

With almost 2,000 exhibitors, cpd woman_man (Düsseldorf fairgrounds, Feb. 1-3) is a behemoth of a show and not only Germany’s but Europe’s largest trade fair.

Over the years, the Düsseldorf fair has continuously diversified, both to compensate for a shrinking women’s wear market and to offer added value with new segments like men’s wear and activewear, or with shows-within-the-show like cpd fabrics.

To make the Düsseldorf experience even more unwieldy, there are hundreds of independent showrooms now scattered all over the city. The result: tired, confused retailers, many of whom complain they spend more time (and money) in taxis or wandering through halls than they do looking at collections.

To help regain a clear focus, cpd is consolidating and reorganizing into three key sectors: women’s wear, men’s wear and lifestyle/casual/sports. The fair is also merging halls that were less than full, narrowing the aisles and walkways between halls and working on a better arrangement of classifications and brands. “We want to reduce the walking or traffic areas, not the areas taken up by stands,” remarked Manfred Kronen, chief executive of the Igedo Company that produces cpd. “But before leaving holes in one hall, we’ll close it and make the next hall fuller.”

To woo manufacturers back to the fairgrounds, cpd has designed an economical stand concept that can be individualized by exhibitors “so they don’t have to invest in huge stands,” Kronen said. “Another thing we’re trying to do, and where we’ve already had some success, is to get some of the city exhibitors to the fair.”

The Igedo Company has come up with small, circular stands to give showroom brands a secondary presence at the fair. “New visitors don’t find the showrooms, and showroom owners need these new buyers, too, as their customers are also diminishing,” he noted.

The Berlin fashion season now kicks off Jan. 16-18 with Bread & Butter and Premium Sportswear Couture and Plus. Bread & Butter’s move from Cologne to Berlin in winter 2003 established Berlin as the denim and urbanwear show capital, and Bread & Butter’s organizers are now widening its range to include young contemporary fashion in the broadest sense.

The show is expected to grow from 300 to 450 men’s and women’s exhibitors, who will now be housed in the industrial Pirelli as well as Siemens’ Kabelwerks in Berlin Spandau. The new factory hall is as large as the original Bread & Butter space, and will feature designer, men’s wear, women’s wear, sportswear and casualwear from brands such as Serfontaine, North Sails, Custo Barcelona, Clothescraft, Cinque and Calvin Klein Jeans. There will be a new area for group and individual fashion shows, entertainment, catering and a business lounge, and last summer’s outdoor Luna Park will be turned into a winter wonderland with ice skating, outdoor catering and other frosty features. “There has to be a bit of joy, a bit of motivation besides business,” said Kristyan Geyr, marketing manager.

Other new features include Bread & Butter-produced fashion shows, a “Brand Bible” to answer all your questions about the brands and a “Look Book” of key trends to use as reference, in addition to the magazine format catalogue. “What began as an event with a special atmosphere has turned into an important marketing tool for the industry,” Geyr declared.

Bread & Butter started with 50 brands in about 80,000 square feet. “We’re now a professional exhibition — but with the coolness factor still in it,” said Bread & Butter co-founder Karl-Heinz Müller. The show currently covers more than 500,000 square feet, and could almost double its size again. “But even with 100,000 square feet, we’d still be medium size and selective. Of our 450 brands, many do not participate in any fairs at all.”

Running parallel to Bread & Butter, Premium Sportswear Couture, held in the tunnels beneath Potsdamer Platz, is also in an expansive mode. A new affiliate show, Premium Plus, will be launched at the top of Renzo Piano’s Chrysler Daimler building a few blocks away. While nothing has been confirmed at this stage, the organizers hope to book 40 high-end designer brands to the first event. “It’s not about being double strong, but about giving the market what it needs,” said Premium co-founder Anita Anic. “So many collections said ‘no’ to the tunnel, but wanted to participate in Premium and Berlin.”

Premium Sportswear Couture will feature about 200 sportswear and fashion collections for men and women, and both group and mono-label fashion shows will be staged for the first time this season. The collections range from upper-end, international jeans and fashion labels to small Berlin-based brands. “We’re working on an internationally believable fair versus a national trade show,” Anic said. “And we’re selling the idea of a mix, showing brands a retailer could also mix in his store.”

Also on Potsdamer Platz, music producer Matt Lehitka is bringing about 25 streetwear producers like Fubu and Phat Farm together for the second time at Berlin Fashion Week in the Esplanade in Sony Center. “Only like-minded people are there, and it’s a very exclusive atmosphere where buyers can write in peace, eat and drink for free and get to know the city, all in walking distance,” he declared. His planned new venture, Fashion Entertainment Week or FEW, is being postponed till next summer, though he hopes this teaser at Berlin Fashion Week will spark interest in his fashion-music crossover event.

Also on the drawing board in Berlin: a men’s wear preview called Berlin Durchreise in the Ullsteinhaus and Mode-Center-Berlin, held from Jan. 14-16.

inspired fashion.” Originally planned for last summer, Ispovision will showcase about 40 to 50 brands linked to the world of sports such as Helly Hanson, Matador, Stussi, Converse, Casal and Nike Woman. Jacqueline Sasse, project director, estimates that about 10 collections will be sailing-inspired, 20 winter sports-inspired, 10 from the fitness/wellness genre and 10 to 15 of streetwear brands.

“This is not a second Bread & Butter. It’s more about presenting these brands in their [active] sphere,” she said. “We simply believe this is a relevant market segment that won’t disappear. It’s more than just a trend.” With the focus on transferring sports impulses to fashion, Ispovision will be organized as a style city with individually designed Uptown, Downtown, Park Village and Bayside districts. There’ll be one big fashion show, and unlike Ispo, which shuts its doors at 6, Ispovision will be open till 9 p.m. “It’ll be business 9 to 5, and then chilling, communication and the fashion show from 5 to 9,” Sasse commented.

Another Munich fair is also in the works, but probably won’t get off the ground until summer 2004. The Munich Fashion Fair, a small show of better men’s wear makers, such as Barbera, Kiton, Windsor and Missoni, is working to set up Munich Fashion Fair Woman. “Many of our exhibitors have women’s collections, but we don’t know how many would take part in a women’s edition,” said George von Berger, one of Munich Fashion Fair’s founders and directors.

Von Berger said the Munich Fashion Fair is not in competition with either Bread & Butter or cpd, but noted that “most retailers have to come to Munich anyway during order week. All the important showrooms are there, and when we have 40 [exhibitors] together, we’ll start small. Whether it happens first in February or August is unclear.”