Ghesquiere, Connelly Get Tough for Spring In Balenciaga Ads

Leave it to Nicolas Ghesquiere to use the power of celebrity on his own terms — and in a season when many brands reverted to models in advertising. 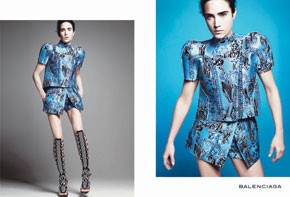 PARIS — Leave it to Nicolas Ghesquière to use the power of celebrity on his own terms — and in a season when many brands reverted to models in advertising. “It’s the friendship: That’s why she did the campaign,” Ghesquière said of Jennifer Connelly, who appears in Balenciaga’s spring campaign, breaking in February fashion titles. “I’ve been after her for a few years now.”

There was a compelling incentive for her this season: Balenciaga’s spring collection of power florals and strong shoulders. “She was the inspiration for the show. I had this vision of her. Even for the casting, I only wanted brunette girls,” Ghesquière said. “Her beauty and her character are so inspiring.”

In front of David Sims’ lens in a Los Angeles photo studio, Connelly used her acting talents to maximum effect, displaying superhero potency while wearing Ghesquière sculptural designs. “It was super to work with an actress. I said, ‘You have to be strong, almost like a fighter,'” the designer related. “The face and the body language are very specific to an actress….I wanted this campaign to be about Jennifer and to use her beauty. There was not much hair and makeup.”

Nor any star attitude. “She is so low key. She arrived alone: no Hollywood drama,” Ghesquière related.

Connelly did, however, play a role in the styling, trying on all the looks in the collection to help narrow the choice. “She had an opinion on the brooch we put on one dress, the best colors for her skin,” Ghesquière said. “It was a discussion.”

Connelly first dialed the Balenciaga designer for the Academy Awards in 2002, when she took home an Oscar for “A Beautiful Mind” in a strapless, putty-colored gown that thrust Ghesquière into the hot lights of Hollywood and sparked an ongoing relationship.

The actress has had an informal rapport with the house ever since, which suits Ghesquière fine: He’s critical of the celebrity-for-hire trend, and opted to feature leather goods in still life, not on Connelly’s arm. “She’s not selling the bags. The bags sell themselves,” he said. “It’s in a moment when everybody’s trying to buy celebrities to sell products.”

This story first appeared in the January 8, 2008 issue of WWD. Subscribe Today.

Ghesquière said the house’s budget for the campaign — with art direction by Fabien Baron — is up for the season as the brand reaches into new markets and expands its presence in key titles.