Gildan Activewear, one of Canada's largest apparel firms, is embarking on a strategy to more than double sales to $1.5 billion by 2010. 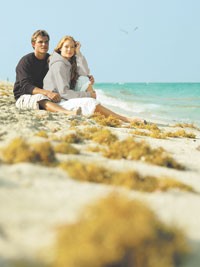 MONTREAL — Gildan Activewear, one of Canada’s largest apparel firms, is embarking on a strategy to more than double sales to $1.5 billion by 2010.

The company is expanding internationally, adding production capacity and venturing for the first time into socks and underwear, and is starting to sell its own products directly to mass retailers and not just to wholesale distributors, as it has done previously.

“We are a low-cost producer and we understand our market,” Gildan chief executive officer Glenn J. Chamandy said in an interview. “We will continue to use our balance sheet as a vehicle for growth.”

Best known as a supplier of blank T-shirts and sweatshirts for screen printing, the Montreal firm has built its business with low-cost products that offer comfort and value. Competitors such as Fruit of the Loom and Russell Corp. have struggled in recent years, partly because of the costs associated with keeping manufacturing in the U.S. Gildan, however, adapted to changing market conditions by moving much of its production to Latin America. Chamandy said the company prefers to operate plants in that region, where it is able to receive low-cost samples fast, usually with about a three-week turnaround. He has said the company isn’t interested in producing in China.

“China is not oriented to service, both in the wholesale and retail markets,” Chamandy told analysts in July.

Most of Gildan’s manufacturing is done in Honduras, Mexico, Haiti, Nicaragua and the Dominican Republic, where some 9,000 workers produce almost 400 million garments a year. All of those countries have preferential trade status offering low tariff rates; goods from Mexico enter the U.S. duty-free under the North American Free Trade Agreement. That will also be the case for Honduras, Nicaragua and the Dominican Republic when was the Central American Free Trade Agreement is fully implemented.

While it’s still less expensive to produce a T-shirt in China than in Central America or the Caribbean, Gildan’s overall costs are significantly lower than they were before it moved production. Labor accounts for about 10 percent of total costs compared with 30 percent four years ago, Chamandy said.

The move to sell directly to retailers is a significant step for the firm, but it will essentially be selling similar merchandise to what it currently offers via wholesale distributors, most of which are screen printers and specialty imprint companies.

“The key to success is going to be developing replenishment-type programs with large retailers, which is very similar to what we do in the wholesale market,” Chamandy said. “We’re going to leverage our low-cost manufacturing ability and apply it to better prices, better product and higher margins for the retailers. We believe pricing is a driving factor of consumer purchasing habits.”

The company initially is targeting regional chains and eventually wants to sell to the mass retailers like Wal-Mart and Kmart, he said. Gildan has hired new staff and expanded its distribution center in Montreal to service this new business.

Chamandy said the company sees a significant opportunity in men’s and boys’ underwear and socks, categories it is just beginning to enter. Gildan is looking to be a full supplier of these categories with an aggressive replenishment program, he said, noting that the firm has been preparing by ramping up new facilities. In June, Gildan opened a socks plant in Honduras.

“We’re going after socks that don’t go out of style, and that’s what we’re building our business around — more of a staple-type product than something that is fashion forward,” Chamandy said.

Gildan is closely looking at other sock companies to possibly make an acquisition, although Chamandy declined to name firms.

“The sock business is very fragmented in North America,” he said.

Among the biggest players in socks in the U.S. are Hanes, a division of Sara Lee Branded Apparel; American Essentials, which makes Calvin Klein, and Kasyer-Roth, owner of Hue.

For underwear, Gildan plans to make briefs with Lycra spandex around the legs instead of elastic for better stretch and comfort. Once the company has made inroads in the male underwear market, Gildan may introduce products for women, Chamandy said.

Gildan has three or four more years to operate at current capacity before it has to make significant investments to boost capacity even more, he noted.

With its consistently strong performance and clean balance sheet, Gildan could itself be a takeover target, some analysts said. But such speculation doesn’t deter Chamandy. “The best defense is a good offense,” he said, referring to acquisition of a sock firm.

In Gildan’s core business, Chamandy said women’s T-shirts and tank tops are the fastest-growing pieces of the wholesale market, and the company intends to keep expanding its women’s business this year. Gildan is also enlarging its fleece and golf shirts lines.

The company recently began an advertising campaign with billboards around Montreal and other cities to help promote its own label to consumers. The tag line is “Gildan — Part of Your Life.” This is the first time the company has appealed directly to consumers.

On the international front, Gildan wants to boost its business in Europe, as well as in Mexico, Japan, Hong Kong and other markets, Chamandy said.

“We are going to focus on the countries that provide duty-free and quota-free access from our manufacturing bases in Central America,” he said. “Our manufacturing capacity has really been set up to serve the North American and European markets very efficiently and effectively.”