Gillian Anderson, in New York and Beyond ‘The X Files’

Gabriela Hearst hosted a dinner for Anderson as she preps for her role as Blanche DuBois in "A Streetcar Named Desire." 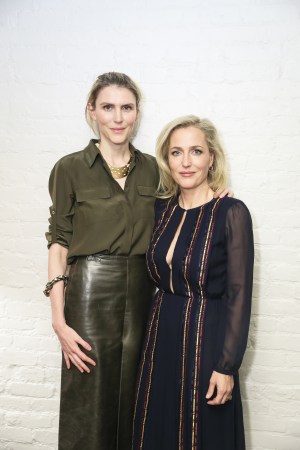 During a small dinner party Monday night hosted by Gabriela Hearst and her husband Austin in honor the actress Gillian Anderson, the model Lauren Hutton told a story about living on the Bowery in the Eighties and being confronted by a crack addict near her apartment. She likened her reaction to that of a disoriented zebra that had accidentally trotted into the middle of a herd of lions. In hopes of survival, she, like the zebra, “didn’t break pace,” said Hutton, who has spent a lot of time witnessing the Darwinian wildlife of Africa, as has Anderson, who was previously married to a Kenyan.

Perhaps Anderson could relate to the zebra. The dinner party, held at Hearst’s West Village town house to celebrate her six-week run as Blanche DuBois in Tennessee Williams’ “A Streetcar Named Desire” at St. Ann’s Warehouse (opening April 23), was the rare to the point of nonexistent occasion on which a celebrity ventured into the lion’s den of a press event without her publicist. Put on the spot in a roomful of strangers, with the exception of her stylist Thomas Carter Phillips and Waris Ahluwalia, Anderson didn’t break pace. She fielded small talk — the tooth fairy — but mostly big talk of Buddhism, Africa, cloning polo ponies, British theater, American theater, British television, American television, and playing Williams’ most famous female character.

“She is one of the most complex characters I have ever read on any page, in any text or literature,” said Anderson, wearing a dress from Hearst’s fall collection, which was trimmed in the Morse Code symbols for “love.” “She’s so complicated and tragic. I think her journey is understandable and shows just how tortured she is.…She just has so many layers that work simultaneously, obviously it’s going to be a challenge.” She’s had practice with the role, having played DuBois to critical acclaim with the same cast and director, Benedict Andrews, in 2014 at the Young Vic in London, where she’s based.

Hearst didn’t see the London production of Streetcar, but was familiar with Anderson from her role as Agent Scully in “The X-Files,” and a major fan of her role as Stella Gibson in the BBC serial killer series “The Fall.” “She is very much the woman you dream of dressing, very sexy and so different from her ‘X Files’ character,” said Hearst, who has been hosting events at her home for women she considers to embody her designs, beginning with U.S. Olympic triathlete Gwen Jorgensen last fall. “Gillian’s character in ‘The Fall’ and the way she portrays her was such a big inspiration for me. I knew that behind such a talent had to be a deep intelligence.”