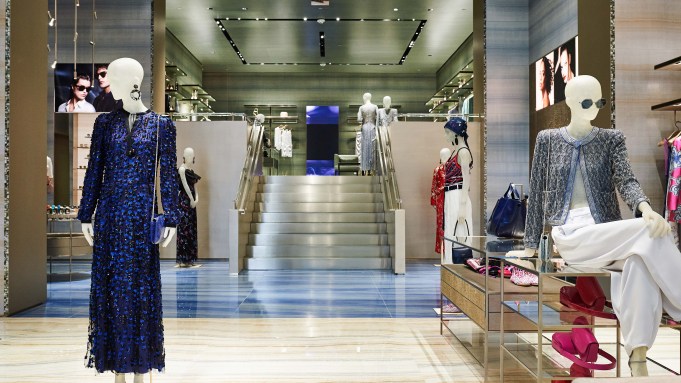 Leave it to Giorgio Armani to time the unveiling of his glittery new Rodeo Drive boutique to Oscars week.

The red carpet maestro first ushered in the era of high-stakes celebrity dressing when he put Jodie Foster in his striking champagne silk faille kimono jacket and beaded pants for the 1992 Oscars.

Fun fact: He also dressed Laura Dern, Annette Bening and Anjelica Huston that night, but the suit was the story, setting a new standard for red carpet style.

“I remember getting [Foster] to wear that trouser suit, instead of the classic ballgown, was a challenge,” Armani said in an email interview. “But I believe it created an indelible image in the collective imagination.”

His Beverly Hills boutique, originally designed by Michael Chow, was a Los Angeles fixture even before that, opening in August 1988 and catering to power players like then-Lakers coach Pat Riley, groundbreaking female Hollywood executives Sherry Lansing and Dawn Steel, not to mention male stars like Richard Gere, who first cemented the brand name in pop culture.

“My breakthrough into American business was definitely the deconstructed suit worn by Richard Gere in ‘American Gigolo.’ But let’s not forget that I also dressed Lauren Hutton for some scenes of that film, with my feminine version of soft tailoring and a style that was very close to the pragmatic American sensibility,” Armani said.

With its outdoor terrace, private elevator and VIP dressing office in situ, the Rodeo Drive landmark is the engine of the Armani celebrity machine, where nearly every star in the universe has been for a fitting, from Glenn Close and Martin Scorsese to “Hacks” star Hannah Einbinder and “The Power of the Dog” actor Jesse Plemons, who wore Armani for the Critics Choice Awards last week.

And now, after nine months of renovations, it is ready for another close up.

From the street, the iconic facade with the GA logo, now flanked by two huge palm tree stencils, almost has the look of a marquee. “Palm trees are the emblem of Los Angeles and we deliberately chose to integrate them into the store aesthetic, with a solution that creates a shadow effect during the day and a graphic-style silhouette at night,” Armani said of his favorite feature, linking the building to the natural environment.

Working with his in-house team of architects, he let the SoCal sunshine into the 9,100-square-foot space, flooding it with light and replacing the austere of yesteryear Armani with a more modern, glamorous interior.

Hanging pendant lighting puts the spotlight on the glittery clothes, which should draw visitors just to gawk, including a silver and blue checkerboard evening jacket, red floral embroidered tulle overlaid trousers and a blue-and-black stacked sequin dress that looks like something Meghan Markle would wear. (She famously chose Armani for last year’s interview with Oprah.)

The second floor made-to-order men’s department focuses on sartorial offerings, as does a new made-to-order women’s department, the first of its kind on the street, where Meryl Streep’s wardrobe for the film “Don’t Look Up” was created. Customers can choose colors, fabrics, buttons, linings and more, and have their names next to Giorgio Armani’s sewn inside.

“It is a service that covers a whole world of different customizations, starting with suits but including knitwear, leather and even denim,” Armani said. “It was thanks to this type of service that we increased our market in the industry during the pandemic. That was when we decided to introduce a limited service for women, too, which was very well received, and we realized that there was a demand for personalized outfits from our female audience. The decision to offer this service right here in Los Angeles, a place where women have unique style and which has great media exposure, seemed a natural step to me. I am convinced that it will be a growing business, it might not outdo evening wear but it will probably reach the same level.”

For evening, a special men’s capsule has been released just for the L.A. store, including blue and black velvet jackets, jacquard vests and more event-ready pieces. A women’s capsule focuses on styles in “Armani gold.”

Pocket doors can close off spaces for VIPs; the women’s side also has a vanity so stars can take the private elevator up from the back parking lot and use the store to get ready for an event, even grabbing a piece of Armani fine jewelry as a finishing touch.

While Armani was not able to make the trip himself to L.A., he was styling the store from Milan via video, replacing the looks on two mannequins to better match the Mediterranean blue marble floor just hours before the store was due to open.

On Saturday night, his niece Roberta Armani will cohost an opening party with Nicole Kidman.

“Nicole Kidman is a woman whose beauty embodies an ideal very close to my own,” the designer said of the evening’s muse. “I have a deep admiration for her, she is an actor capable of interpreting the most diverse roles, managing to reinvent herself each time and remain incredibly current.”

While the pandemic is clearly not over, Armani is optimistic about opening the doors to the new store now.

“I strongly believe in the power of the American market today because it is cyclical, and it always recovers very rapidly,” he said, adding that sales in L.A. are back to pre-pandemic levels and growing. “It is the perfect mix of luxury and traditional customers. This allows us to leverage both our DNA, meaning garments for special occasions and evening wear, and our ability to respond to new lifestyle trends.”

And though much of the fashion industry’s focus has been on the rise of digital, he still believes in the power of physical retail.

“The role of the flagship store remains fundamental, although, of course, e-commerce is highly prevalent nowadays. But only a flagship store can involve the customer in a physical experience, where they actually enter the brand’s world and aesthetic. This is an experience that cannot, in any way, be conveyed through online shopping. The two channels integrate, of course, but the tangibility of my world only becomes real with the physical flagship store. That is why I work so hard on the materials and the tactile and visual impressions that are created for the customer,” he said. (Product offerings in the flagship also far outnumber those on giorgioarmani.com, with the most luxurious pieces available only in store.)

“I think that most people who buy my clothes online already know my work, so they already have an idea of ​​how my fabrics feel to the touch,” the designer said. “In my case, I believe that online is a channel for my existing loyal customers. Anybody taking an interest in Armani for the first time ought to do so in person because my soft tailoring really has to be tried on to be understood.”