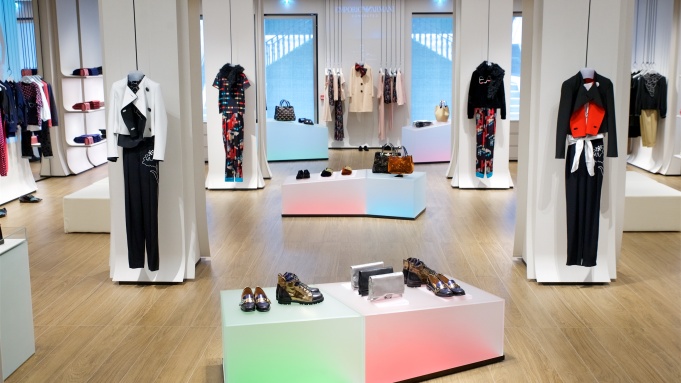 LONDON — Giorgio Armani gave this beleaguered city a lift -—and a shower of stardust — opening his newly refurbished Emporio Armani store on New Bond Street, hosting a party where Ellie Goulding and A-ha performed, and showcasing the work of young London talents at his spring 2018 runway event on Sunday night.

To mark his big moment in the country that on Friday witnessed its fifth terror attack this year, 700 black cabs and double-decker buses were customized with Emporio campaign images, while the London Eye and County Hall were specially illuminated with an Emporio Armani projection on the first night of London Fashion Week.

It has been 11 years since Armani has done anything big in London: In 2006, the brand took over Earl’s Court to show the spring 2007 collection with Leonardo DiCaprio and James Franco in the audience and Beyoncé performing at the event, which raised money and awareness for AIDS.

This time around it was all about the new face of Emporio, and while the event was on a much smaller scale, the energy — and positivity — weren’t lacking at the Tobacco Dock show and party venue in east London.

“We’re very emotional about this show and, also, my uncle is very ’emozionale,’ like we say in Italiano, with coming back to London to show the collection,” said Roberta Armani. “London is a very special place to us. It’s important that tonight we do something special.”

According to sources, the brand spent upwards of $2 million on the night, much of that going to securing the entertainment.

A-ha performed a set of four songs, including “Crying in the Rain,” and their 1985 hit “Take On Me,” when fans young and old swarmed the dance floor. Ellie Goulding was the other big name on the bill, in addition to DJ sets from Disclosure and Horse Meat Disco, the London fashion set’s favorite DJs.

Former One Direction star Liam Payne was among those said to be performing as well, but he ended up in the front row instead. His single, “Strip That Down,” has outstripped all expectations on the charts and is still one of the most-played songs on American radio after 16 weeks.

“We never expected it to last as long as it has. It’s great but a nightmare at the same time because I want to get my new song out, but no one is letting me do it,” Payne said.

Other guests at the show and party included Poppy Delevingne, Paloma Faith, ballet star Eric Underwood, Lady Amelia Windsor, Chelsea Leyland, Hermione Corfield and Millie Brady, who is soon to star opposite Elle Fanning in “Teen Spirit,” a musical drama due for release next year, written and directed by Max Minghella.

The show itself was summery to the core, with a still-sun kissed Armani bringing bags of sunshine to the already cold and damp London.

The collection was filled with diaphanous and iridescent fabrics, fluid silhouettes and colors straight out of a candy jar — mint, pink and baby blue. Cartoonish red crabs picked their way over sheer dresses and white tops, while naïf star and flower motifs multiplied over jackets and skirts in the collection, which mixed the sporty with the sweet.

Drawstring details dialed down the prettiness of floaty blouses and skirts, while a shower of shiny pink sequins took the hard edge off a hoodie. Sporty touches also came via the red lining of a white leather car coat and the bright red racing stripes streaming down the sides of fluid white trousers.

Pink or baby blue suits had tracksuit-style bottoms, while a magnified madras check on another, more tailored suit, nodded to hot afternoons in Eastern climes.

Dresses were fairy-like and were offered in purple-flecked iridescent fabrics, or with sequins and sleeves as airy as butterfly wings. Ruffles adorned the waists of spaghetti-strap styles in pastels and frothed from the underskirts of drop-waist minidresses dipped in lilac, mint and white.

“This collection accentuates summertime airiness in its very lightness,” said Armani. “It bears no direct reference to British style, yet all of the pieces are combined with great freedom and relish in playing with various aspects of fashion that hearken back to that style.”

As part of his return to London, Armani also collaborated with the British Fashion Council to launch a design contest open to all students studying at institutions that are part of the BFC Colleges Council network.

The three winners of the competition were Boyeong Lim, Dmitry Gotsfrid and Kameel Kayam Shahjhan. They created a bag, a bomber jacket and a shoe, respectively, in line with the DNA of Emporio Armani. The jacket and accessories will be sold as of this week at Emporio Armani stores in the U.K. and on armani.com by late September.

“These young people certainly surprised me pleasantly with their determination and creativity,” Armani told WWD. “They came across as a very lively and proactive group. I think they did a really marvelous job revisiting iconic Emporio pieces with a touch of British flair. It is always interesting to me and highly stimulating for my work, to consider different points of view.”

The New Bond Street store, meanwhile, has been completely renovated with a more open, modern concept. It has a futuristic feel with stark white, asymmetrical furniture used to display men’s and women’s accessories collections.

Clothing is suspended from the ceiling and placed in front of screens that project campaign images or videos. There’s also a glass staircase connecting the floors and warm wooden accents are featured throughout the space.

Armani took the London opportunity to relaunch Emporio Armani Magazine — after a hiatus of two decades. Issue 19 of the magazine, a large-format print title, is called rEAarranged, and it will be available at select Emporio Armani stores and at the Armani/Silos in Milan.

Asked why he chose this moment to relaunch the magazine, Armani said: “It seemed like the right time to me. The relaunch of Emporio Armani is a major focus, and among the many initiatives related to this new path, I also had in mind to do a new issue of the magazine.”

He said he believes in print: “Books and magazines have a little extra something that makes them perfect for displaying images. The underlying sense of permanence supports the constructing of a rhythm and a narrative that spans multiple pages. The digital medium is amazing for a host of uses, in particular for all that the print medium is unable to do — moving images, playing sounds — but for a certain type of photography, paper offers a great deal more. It holds a special fascination that is better able to stand the test of time.”