Yes, those ubiquitous pretty misses won the popularity contest at Betsey Johnson, BCBG and Rebecca Taylor. But a few collections did venture beyond the season’s girly mandate, including Ellen Tracy with its quiet chic and Halston with glitz. 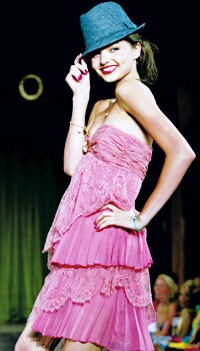 Yes, those ubiquitous pretty misses won the popularity contest at Betsey Johnson, BCBG and Rebecca Taylor. But a few collections did venture beyond the season’s girly mandate, including Ellen Tracy with its quiet chic and Halston with glitz.

Betsey Johnson: Sayonara to the rock chicks of last season. In her spring show at Matsuri in the basement of the Maritime Hotel, Betsey Johnson made a few references to her Asian inspiration — a chiffon kimono blouse here, a Chinese newspaper printed onto a slipdress there — but the focus of her collection was really the fun looks that are her signature. There were tons of flirty dresses and party looks, such as a teal strapless frock featuring a gold zip-front corset top and shredded taffeta bottom that would be just right for any fete, and a pretty striped taffeta blouse worn with a flounced velvet skirt that would certainly do for a hot date. There were also white denim pieces and T-shirt dresses offering a touch of street cred. Cute as it all was, the collection could have been a bit more focused. Still, as the designer cartwheeled and karate-chopped her way down the catwalk to the strains of “Kung Fu Fighting,” it hardly seemed to matter.

Ellen Tracy: This firm usually goes with the less-is-more approach to fashion, in both design and presentation, and while the company stayed with the former for spring, it decided to go for a formal show this time because the top executives were so happy with the clothes. And who can blame them? It’s nice to know that, in a season where loud color is dominant, a gal can always turn to Ellen Tracy for a little peace and quiet. This time, in fact, the collection was almost all white, with a sprinkling of gentle sherbet tones, such as the pale lavender and cantaloupe knits, and the light floral chiffon dresses and tops that were feminine without being too flirty. A couple of sharp peacoats looked more than seaworthy when paired with cropped pants and belted cardigans, and for the lady boss who wants to give her power suit the day off, there was a lovely contrast-border twinset paired with a cotton jacquard pencil skirt that oozed easy sophistication.

BCBG Max Azria: After last season’s slump, Max Azria returned with a spring lineup full of whimsy and charm. Azria has long had a love affair with simple and draped wispy looks that have a certain appeal, but sometimes lack a unique voice. This time, he found his voice and delivered it to the twang of a folksy beat. Fun cotton dresses in bright, cheery colors such as orange, aqua or iris were rich with details, including embroideries or zigzag hems, playing up that folksy look, and sometimes paired with little embroidered vests or jackets. His pants and shorts were relaxed and loose and looked cute when rolled at the cuffs and paired with sweet jackets and floral-printed tops. Too bad he didn’t try to translate this playful theme into evening. Instead, he reverted to his favorite flowing chiffon numbers. Models floated down the runway in his light-as-a-feather frocks in otherworldly hues of light blue, pink and lilac. And fluid as they were, many were bogged down with too many layers of Stevie Nicks-style square hemlines. Overall, however, it was a solid effort for spring.

Halston: While Bradley Bayou is great at creating glitzy, glam looks for his loyal made-to-order customers, they didn’t translate on the runway this season. Perhaps it had to do with the fact that sophisticated clothes require an equally sophisticated presentation, and the show didn’t do justice to the collection. Bayou sent out 22 looks, mostly slinky gowns and short cocktail dresses with crystals, feathers, sequins and embroidered lace, but it was the chic and simple pieces that stood out, such as the short blue wool crepe A-line dress over a tulle crinoline, a sleek ivory wool crepe tuxedo and a slim pewter wool skirt with a long corseted jacket. There were a few more elaborate numbers that reminded one of how Bradley can make his version of glamour more beautiful than glitzy. He did that with a pink lambskin vest worn with an embroidered metallic high-waisted skirt and a butterfly-detailed shirt with allover micro hand-beading that was too beautiful to be worn with skintight stretch-leather jeans.

Rebecca Taylor: Absolutely beguiling. Monday night, Rebecca Taylor invited everyone to step into her enchanted world where woodland creatures and blithe spirits frolic in happy coexistence. Taylor does blithe like nobody else, especially when she lightens her hand and doesn’t think too hard about where to place the spangles, ribbons and appliqués that are her stamp.

All those cotton and silk petticoat dresses and papery chemises, in dusky rose and earth tones, couldn’t have weighed more than the colorful butterflies sprinkled across them. The silver-winged butterflies and a menagerie of deer, rabbits and birds appliquéd on lacy hems were the recurring themes, even when Taylor briefly flirted with the prairie motif, working in whisper-thin calicos. But should the city girl be turned away with all this ethereality, Taylor anchored the collection with smart, simple denim and canvas shorts, skirts and shrunken jackets. Taylor can do cute really well, and in the past, has perhaps relied on that too much. Yet with her finale series of breathy smocked and camisole silk gowns, she proved that she can do beautiful just as easily.

Douglas Hannant: For his spring outing, designer Douglas Hannant invoked images of Millicent Rogers, the Standard Oil heiress who lived in Europe and collected Mainbocher before being seduced by the sandy, turquoise-laden beauty of Taos, New Mexico. But Hannant is an astute designer who knows that his Lunching Lady clientele isn’t likely to relinquish Park Avenue for the pottery wheel anytime soon. Most of the time, he wisely kept a light touch with turquoise beading, trimming fresh white tweed coats and dresses with the stuff — and even won with a swingy beaded skirt worn with a delicate cashmere tank. However, what Hannant does best is his perennially pretty, tweedy look in the form of no-fuss tailored pieces. Though he managed to freshen up this look a bit by pairing a fitted ivory jacket with a delightfully swingy chiffon skirt, grand and brand-new statements are not his forte. Hannant is at his best when being straightforward, and some attempts at fashion-forwardness, such as a couple of fringed, suede looks, didn’t work at all.