Construction is under way in Paris for a new Givenchy flagship, suggesting the house might have finally found a solid foundation on which to build its future. 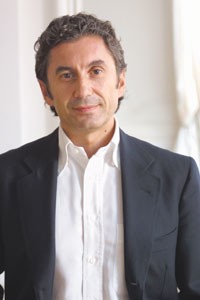 PARIS — Major construction is under way on the Faubourg Saint Honore here for a new Givenchy flagship, suggesting the French house, after many topsy-turvy years, has found a solid foundation on which to build its future.

Not bad for a label that, despite having strong brand recognition internationally, has been “a bit outside the circle” when it came to distribution in the fashion world’s leading capitals and stores, Gobbetti acknowledged.

“We planted a very good seed,” he said. “And I think the potential for development is really, really big, for ready-to-wear and for accessories.”

Tisci, 30, is slated to present his first full-scale collection on the runway today, only six months after the relatively unknown Italian was plucked to become Givenchy’s fifth designer in the past 10 years. Gobbetti said buyers should expect to see a new direction in accessories to match Tisci’s modern, edgy approach to the French label.

Gobbetti acknowledged Tisci was widely viewed as a risky hire and passing the couture test with critics and clients was a critical step.

“It clearly demonstrated he could do couture. This was one of the questions everyone had,” Gobbetti said.

He also reiterated that Givenchy, part of the LVMH Moët Hennessy Louis Vuitton luxury empire, is “100 percent committed” to maintaining couture. While the July presentation, with models positioned in various rooms at its Avenue George V headquarters, might have given the impression of a cost-saving measure or retrenchment, Gobbetti said that was not the case. “It wasn’t so easy [to convert our offices to a show space],” he said. “It was in-house because we wanted to show change was coming from within.”

Gobbetti said he was also emboldened by buyer reaction to the pre-collection, which included jersey dresses with transformable necklines, lean pants with corset-like waistbands and soft jackets with zippered lapels. Total sales were double versus a year ago and “we could have sold even more,” Gobbetti said. “We kept it very limited, very selective. I judge more from the quality of distribution we were able to attract.”

Among the best-booked items were a silk dress with a lace insert at the back retailing for $3,140; a soft crepe jacket for $1,700, and a jersey top with flower-like cutouts at the back for $700.

Since the 1995 retirement of founder Hubert de Givenchy, the house has seen a revolving door of designers — John Galliano, Alexander McQueen and Julien Macdonald — and a smorgasbord of styles. Tisci has said he is keen to move away from associations with the late actress Audrey Hepburn, still the ultimate Givenchy icon, and carve out a more clean and severe aesthetic, with a touch of romance.

Gobbetti said Givenchy’s positioning changed instantly with the pre-collection. “We went from a very structured, to a much less structured collection,” he said, also describing it as modern, wearable, younger in spirit, “properly priced” and “very identifiable.”

He also noted that Tisci, who had a signature collection in Milan following stints at Antonio Berardi, Coccapani and Ruffo Research, had begun to attract a small retail and editorial following.

But once she learned he was joining Givenchy, Gilhart decided to take a look at the French label that had not been in Barneys since a special event in 1993, when it sold a reedited edition of Hubert de Givenchy’s little black dresses.

“We thought there were interesting things in the [pre-spring] collection,” she said. “There were some lovely dresses and some interesting jackets. We also really liked his couture.”

Men’s wear, overseen by designer Ozwald Boateng, remains the largest business at Givenchy, but Gobbetti said he expects women’s to catch up quickly given the new rtw positioning and an expansion of the accessories category.

To date, Givenchy’s women’s accessories have centered on entry-level, mostly logo-driven bags, complemented by a few runway styles like the “pumpkin” bag created during the Macdonald era. Gobbetti said the leather category would be expanded and harmonized with the rtw, with one of the first volleys being the “Pluto” bag, a floppy, soft style named after the gangly Disney character, expected to be unveiled in new sizes and materials on the catwalk today.

Also expect more movement on the advertising and retail fronts. After the April 2004 exit of Macdonald, Givenchy was without a women’s creative director and did not produce image campaigns. A double-page spread of model Maria Carla Bosconi in a sweeping black chiffon cape announced Tisci’s darker direction in magazines this fall.

Details of the forthcoming spring campaign have yet to be finalized, but Gobbetti hinted Bosconi, a close friend and muse of Tisci’s, would likely be tapped.

Meanwhile, Givenchy closed its Faubourg Saint Honore location last April while the building does an extensive structural renovation. Gobbetti secured the lease for the space next door, previously occupied by Guy Laroche, to create a 3,750-square-foot flagship that will bow in mid-2007. He said it would showcase all women’s and men’s products on one floor.

As an interim measure, Givenchy gave a face-lift to its George V location, installing gray stone floors over the Seventies tiles, giving the store a modern, clean feel with white walls and contemporary furniture. A new alcove was added to feature accessories.

Givenchy has eight freestanding stores — one in New York, three in China, three in France and one in Japan — plus 29 franchise locations. Together, Europe and Asia make up 80 percent of the business, with the U.S. representing a mere 5 percent.