The fledgling men’s resort line is going it alone for the first time this season, with its first independent presentation. 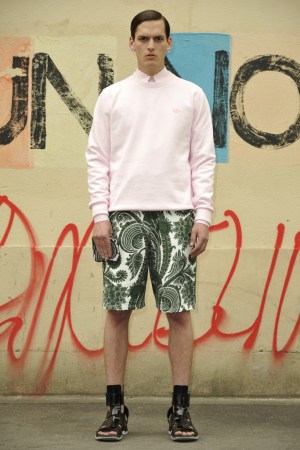 Givenchy’s fledgling men’s resort line — which last season was shown alongside women’s — is going it alone for the first time this season, with its first independent presentation. The move comes at a time of significant growth for men’s wear at the house.

Creative director Riccardo Tisci conceived the new resort collection as a series of total looks. “What I am trying to build is a personal, strong, recognizable wardrobe for men. There is never a difference between the pre-collection and the show because they talk to the same customers, the same followers that are going to the same shops,” he said. “The only difference is that the pre-collection is about fashion and basics as everyday classic iconic pieces of Givenchy by Riccardo Tisci.”

Picking up from the fall runway collection, Tisci for the new resort collection explored the theme of childhood memories, hooked on a military theme. A noisy print of military decorations and swooshing World World I planes splashes across one of the line’s T-shirts, paired with a Boy Scout-flavored tartan shirt and black shorts, inspired by childhood games of toy soldiers. Adding a sweet yet provocative contrast to the military story, a matching baby pink shirt and sweatshirt are worn with bold paisley print shorts that give an exotic touch to the ensemble. House signatures abound, from Bermuda shorts with split front skirt panels to pristine tuxedos, bib-front shirts and roomy streetwear-inspired T-shirts and sweatshirts.