PARIS — Givenchy, the brand that spearheaded the luxury streetwear revolution with its Rottweiler print T-shirts and high-top sneakers, believes the next big wave in men’s wear is tailoring.

When creative director Clare Waight Keller stages her first stand-alone men’s runway display on Wednesday evening as the special guest of the Pitti Uomo trade show in Florence, expect a hefty dose of the couture sensibility she’s been honing since arriving at the house in 2017, succeeding Riccardo Tisci.

“Fashion will be evolving from that very conspicuous, obvious logo statement into something which is much more refined, sophisticated, less branded, with a strong emphasis on classicism,” he told WWD in an interview at the French fashion house’s historic headquarters on Avenue George V here. 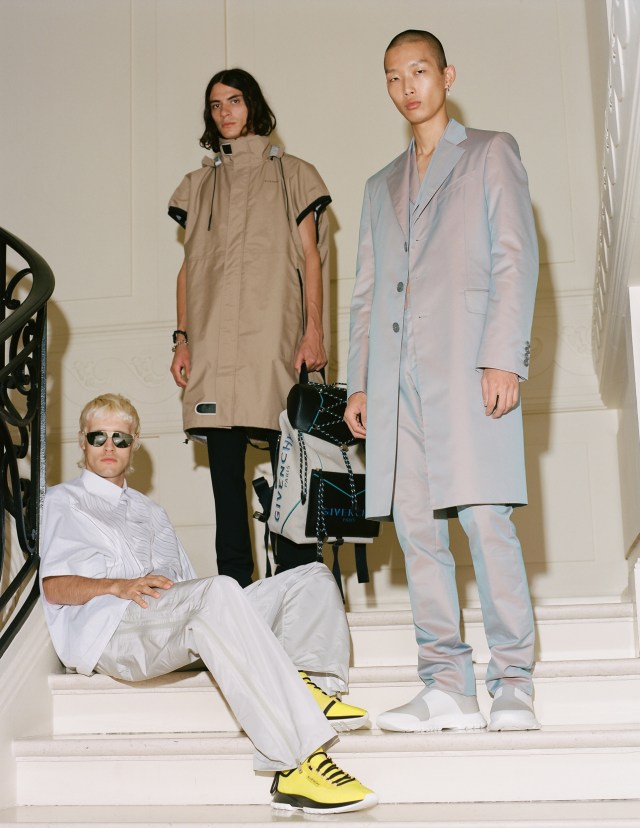 “These are fashion pendulums that are swinging. We’re very happy to embrace that, and we want to work toward a stronger coordination from that statement between men’s and women’s collections,” he added. “You will see a bit less of that overall big branding in the collections.”

The Pitti show comes on the heels of Waight Keller’s well-received men’s presentation in Paris last January, which marked a break from the coed shows she had staged since joining the brand. It set a template for her vision, with a mix of tonal suits, amped-up outerwear and slightly louche after-dark ensembles. 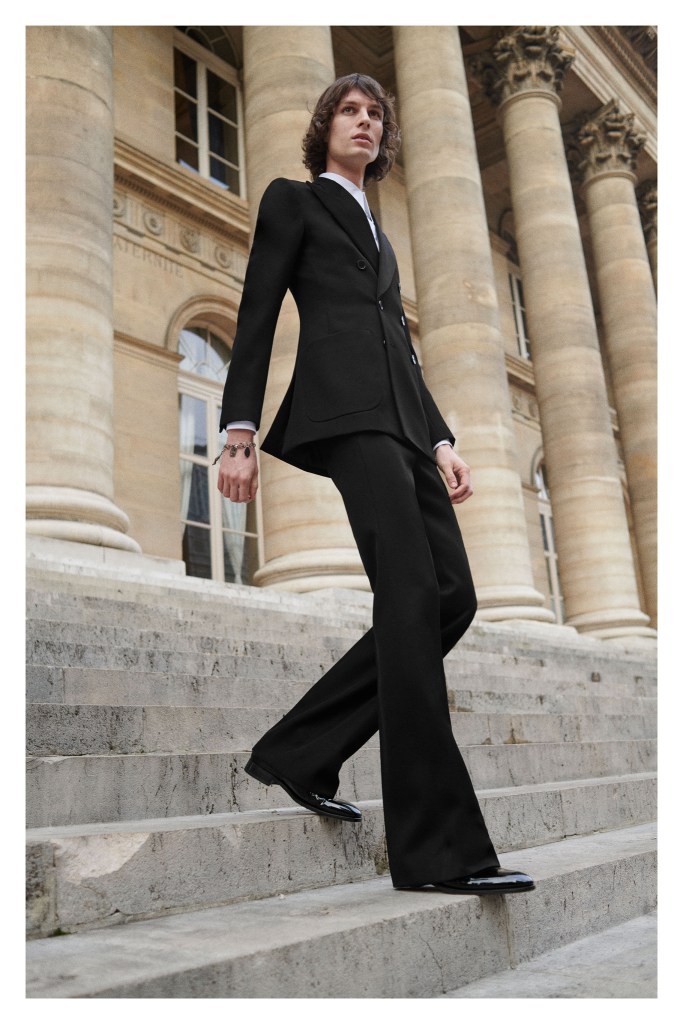 “January was almost like the first chapter in the book. It was sort of setting up my framework of what I want to do,” she told WWD in March.

“Pitti is the opportunity to take that step into a much broader collection, and that’s a big opportunity for me to really express what I want to do, and also just my more rounded vision of what I want for the Givenchy man,” added the designer, who promises a “spectacular” venue for the show.

French conglomerate LVMH Moët Hennessy Louis Vuitton, the owner of Givenchy, has made a high-profile push into the booming men’s wear market with the launch of the category at Celine, as well as the appointment of new designers at the helms of Louis Vuitton, Dior and Berluti in the last year.

“Givenchy was probably a pioneer in developing men’s in a strong fashion way. We have always nurtured that and we’ve seen many other brands embracing that trend. It’s become a big fashion market on its own and definitely the position that our group has taken is leading that trend, and we are very happy with that,” Fortunato said.

At Givenchy, both genders have equal importance, both creatively and in terms of revenues. “Men’s and women’s each represents half of the business, which is quite a unique strength in our business,” he said.

From the start, Waight Keller’s campaigns for the house have portrayed both genders in corresponding pairs. Her spring 2019 advertisements, shot by Steven Meisel and titled “I Am Your Mirror,” features model Henry Kitcher wearing a women’s pleated dress over slim black pants, and Veronika Kunz in a men’s trenchcoat. 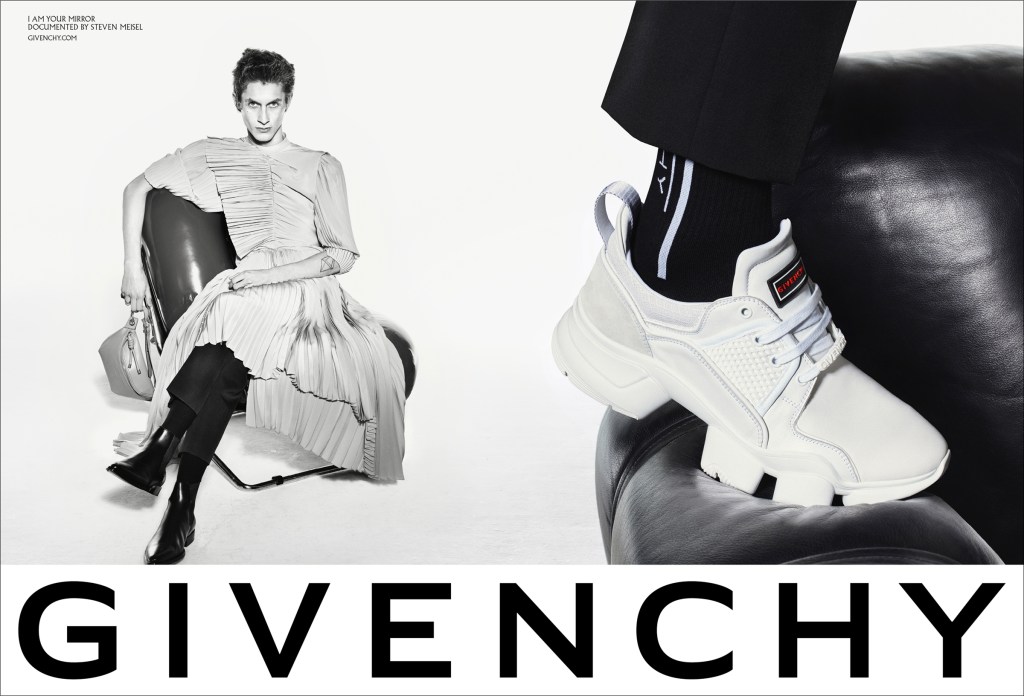 “The beauty of having one creative director that is in charge of the entire aesthetic and the entire brand vision is that it allows for these synergies and these bridges between both universes,” said Fortunato.

“We don’t dress genderless, so it’s not for somebody who is in the middle of both genders. It is very much the concept of people borrowing each others’ pieces in the wardrobe,” he added, noting that a woman might borrow a men’s jacket, while a man might opt for a tailored jacket with couture-inspired embroidery.

“We dress very powerful and confident people who dress according to their own taste and understanding of fashion, regardless of what others who are a bit more traditional may think,” the executive said. At Pitti, that will translate into a mix of sophisticated and casual pieces.

“There’s going to be a very strong approach to mix-and-match layers,” he said. “A lot of research has been done on fabrics. You will see very light, very modern, very interesting fabrics that are not necessarily coming from traditional men’s, but will be played in a very compelling way into both tailoring and sports casual.”

For the WWD shoot, model Xu Meen wore a coat, jacket and pants in a lilac-gray fabric made of cotton and polyester, which gives it a technical sheen, while James Spencer sported an oversized striped cotton poplin shirt with casual pants in a taffeta-like gray polyester material, paired with yellow sneakers.

Presenting her resort collection in Paris two weeks ago, Waight Keller said layering was key to her approach to men’s wear. She noted how a man taking a scooter to work might wear nylon pants over his suit, an attitude that fed through into silhouettes like a new single-lapel jacket worn with jeans and a plaid shirt. 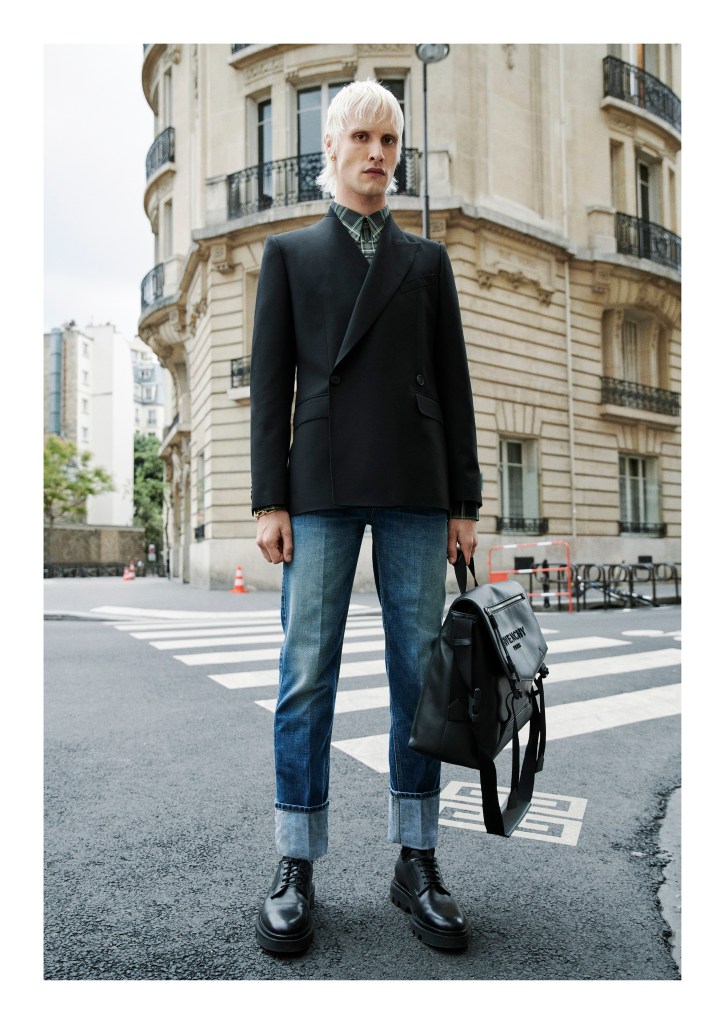 A look for Givenchy resort 2020.  Courtesy of Givenchy

“When I came to the company, there was very little tailoring on the men’s wear side, and this has become a much bigger part of the statement that I wanted to make here. But there’s still this counterbalance that is very evocative of what is current in men’s wear now, which is a very sport-centric dressing,” she said.

“That dynamic and that crossover for me is very current, and it feels like a new way to actually incorporate tailoring into a men’s wardrobe,” the designer added. Waight Keller described the brand’s male customers as eclectic.

“There’s a very youthtful part, which definitely is much more into the casual part of the collection, but we’ve had a massive increase on the tailoring side,” she reported. “We have now a men’s client base for couture which is quite extraordinary, going from zero.”

In addition to regular couture clients, Givenchy has garnered a strong red-carpet following among celebrities including Bradley Cooper, Idris Elba, Rami Malek, Chadwick Boseman and Britain’s Prince Harry, who met the designer when she made the wedding dress for his bride, Meghan Markle. 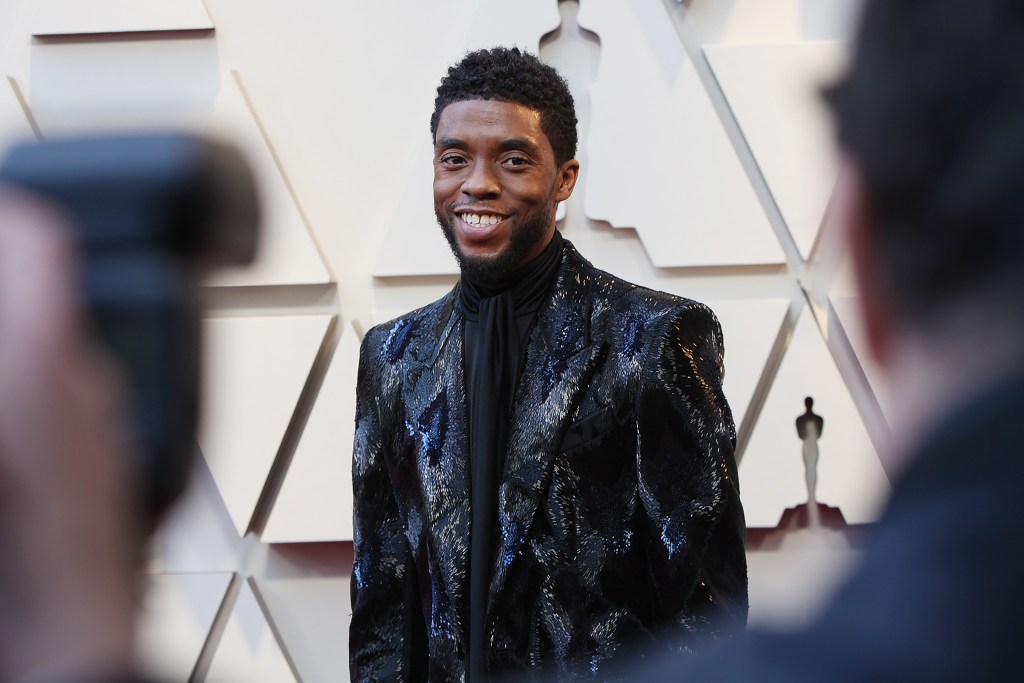 The house is expanding its tailoring atelier at the historic haute couture salons in Paris, in addition to growing its capabilities in accessories in Italy. “We have a big team in Florence that is bound to become bigger,” Fortunato said.

“We are making huge investments in developing our savoir-faire both in leather goods and accessories in Italy, so for us it’s going to be quite important to bring that statement not only to the world, but also to our business partners in the Florence area. A lot of them will be present at the show as our guests,” he explained.

The resort collection introduced the Downtown range of monochrome messenger and weekender bags, adorned with a couture label featuring a red line from the archives of house founder Hubert de Givenchy, which Waight Keller said would feed into revised visual branding over the next six months.

“The historic label, and the one I’ve been using within couture, actually, was something that we were all obsessed with within the company, and it felt quite iconic and I really liked the idea of reworking it slightly,” she said.

Fortunato said it goes back to the idea of longevity. “What people want more and more is to keep the product for the longest time, and a timeless statement on a timeless product does make a lot of sense,” he remarked. “We want to root a very strong fashion statement into a timeless brand statement.”

Though he declined to give targets, he aims to grow the share of accessories within the overall business.

Sneakers will continue to play a big role, even as the brand pivots towards a more dressy style. “It’s a huge business,” he said. “We started sneakers very early in the life of men’s at Givenchy, and at the beginning the industry at large thought it was an epi-phenomenon that would fade away. Today it’s become an integral part of the looks.”

“It’s all about having options for the customer, so we want to develop in a very strong way our classic shoe also, because the savoir-faire, the uniqueness of the network of artisans that we have in Italy, allow us to have a very strong legitimacy in this category,” Fortunato said.

Fortunately, he noted, young men are no longer locked in an either-or approach.

“They know much more than our generation knew about fashion, and they are very comfortable with mixing and matching,” he said. “Givenchy is perfectly well equipped, because of our tailoring savoir-faire and our affinity to do very high-quality sportswear, to mix both together into this strong fashion statement.”

Just don’t expect Fortunato, dressed in his customary dark suit, to join the crowds of peacocking men at the Florence show. “You know, I’m a gray-and-blue guy. I can do sports casual in black and white,” he said.