Two daughters of Hollywood royalty are seeking to prove their mettle in the jewelry business. 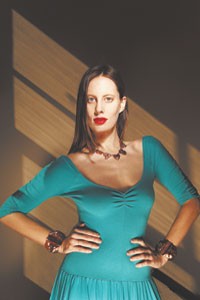 LOS ANGELES — Two daughters of Hollywood royalty are seeking to prove their mettle in the jewelry business.

Liz Goldwyn
“Ever wondered where that phrase ‘worth her weight in gold’ came from?” Liz Goldwyn, a history trivia buff, asked during at break in her studio in Los Angeles’ Koreatown.

“Back at the saloons, gold rush miners would pull out nuggets and weigh them against the prostitutes,” she said. “Whatever equaled their weight is what they would be paid for the night. I love that idea. But copper’s become so expensive, it’s now the new nugget.”

And copper is the metal from which Goldwyn, 29, is fashioning earrings and oversize, crinkled bangles to add to her two-year-old collection of mostly one-off pieces that sell at Barneys New York in Manhattan, Beverly Hills and Tokyo, as well as Colette in Paris and Kaviar & Kind in West Hollywood.

Goldwyn is a girl-about-town known as much for her quirky, cinematic personal style as her film and jewelry endeavors — both of which she interweaves with historical references.

She was barely back from Japan and Canada, where she promoted her burlesque documentary, “Pretty Things,” which aired on HBO, when she packed last Sunday for London and Paris where she is having meetings about her jewelry line. She is also doing a book based on the documentary, to be published in the fall by Regan Books. And then there is her next untitled film, a study on madams at the end of the 19th century.

“It’s so weird because it was the first Oscars that I wasn’t in town,” she said.

That means something when you’re the granddaughter of Samuel Goldwyn, one of Hollywood’s founding moguls.

Liz Goldwyn has carved out her own niche as a consultant, on vintage fashion for Sothebys, and on trends for cosmetics brand Shiseido. A friend of Bottega Veneta creative director Tomas Maier, Goldwyn appeared this spring in print ads for the Italian luxury brand.

She also has been an enthusiastic and influential friend with a great Rolodex to many young designers, including Benjamin Cho.

In 2004, another designer pal, Jess Holzworth, asked her to create jewelry as part of a surrealism installation in a Chinatown gallery. “I wasn’t planning on selling any of it,” she recalled.

But Julie Gilhart, senior vice president, fashion director, of Barneys New York, heard about it and the retailer bought the collection for the store.

An avid collector of vintage fashion and jewelry, Goldwyn buys old arrowheads, rough stones, enamel bits and fittings and links, and reworks them into unique pieces.

“I’m kind of obsessed with the Southwest,” she said. “My mom’s from El Paso, and I love that Millicent Rogers aesthetic.”

The copper, she said, once came from old California mines. “I do a lot of the soldering in the bar,” she said, walking through the multiroom, Thirties-era apartment she shares with her husband and art director, Frank Longo. “It’s Frank’s bar, but he lets me have a corner if I clean up. Some of it I can no longer do here because it’s really toxic,” she added, laughing.

The collection retails from $600 for a pair of copper earrings to agate necklaces starting at $5,000.

“I love the idea of creating one-of-a-kind pieces collectors can buy,” she said. “It’s more special for the buyer and for me. I know they’re appreciating it on another level. Of course, then my buyers tell me, ‘Liz, don’t you want to grow my collection?”‘

She does. But Goldwyn’s plans extend beyond her self-financed line. She’s been approached by major jewelry houses, but she hasn’t committed — yet.

“I want to keep my own line,” she said, “but I really want to work with an established house, where I can dig into their archives and fuse my style with their heritage. I would even consider taking a break from my own line to do such a collaboration.”

Jennifer Meyer
For even the most venerable of jewelry houses, getting a top celebrity to wear the brand at the Oscars takes a Herculian effort.

At the Academy Awards on Sunday, Jennifer Aniston turned up with several hair-thin rings, each with a tiny diamond, from a relatively unknown designer.

It doesn’t hurt that the designer, Jennifer Meyer, is a friend of the actress. Less than a year old, Meyer’s collection of nature- and talisman-inspired gold jewelry has become a regular part of Aniston’s look. At events last year, the actress stacked two dozen 18-karat yellow gold bangles speckled with diamonds and turquoise, and kept wearing a necklace dangling a diamond-dotted leaf when she filmed “The Break Up,” which hits theaters next month.

“Jennifer was the first person to wear that leaf — even before me,” said Meyer, who has since sold several, also in emeralds and rubies, and retailing for $2,400 to $5,500. “So I got lucky. I wanted to create jewelry that you can wear all the time, whether it’s a black-tie event or just going to breakfast.”

“For a girl who couldn’t be more simple and natural,” Meyer added of Aniston, “she can be so elegant, too.”

Affable, although a bit shy, Meyer, 28, is the antithesis of the spotlight-hungry personality. Perhaps it’s because she is a neophyte neither to fashion nor Hollywood. She served as VIP liaison between those two worlds, most recently at Ralph Lauren, and previously at Giorgio Armani.

Her father is Ron Meyer, president and chief operating officer of NBC Universal, and she is guarded about her longtime relationship with actor Tobey Maguire.

“I love what she’s doing now,” Courteney Cox said as she toyed with a round yellow gold pendant stamped with four lucky symbols, hanging from her neck.

Meyer’s group of good-luck charms, retail priced between $650 and $5,500 with a chain, have become de rigueur among some of the well-known and well-heeled women here. The newest is a single pendant made of several charm symbols pushed together.

A few weeks ago, at Meyer’s parents’ Malibu home, Cox was among a group that included Demi Moore and her daughters; Kate Hudson and husband, Chris Robinson; Cindy Crawford; stylist Rachel Zoe, and DreamWorks SKG cofounder Jeffrey Katzenberg, who feted the designer.

They were celebrating her sophomore collection, all in 18-karat gold. “It’s still that weighty, textured, luxurious gold like the leaf, but an evolution,” Meyer said of the hammered discs that define the group.

A necklace of a series of discs is named after her grandmother, Edith Meyer, who turned 86 last month and has inspired the designer. “She’s a walking billboard for my jewelry.”

The disc collection retails from $950 for earrings to $4,800 for the necklace.

So far, Kaviar & Kind and Maxfield sell the line. “It’s so organic, but also has a timeless quality to it,” said Kaviar & Kind owner Sunrise Ruffalo (wife of actor Mark Ruffalo). “It sells so very well. We’ve had a lot of success with her.”

Meyer is looking to expand to retailers in New York and Europe before yearend. And she is considering commissions to create jewelry for movies. “I’m trying to be very strategic,” she said, noting she is self-financing the company. “I’m enjoying this so much now. I want to keep that excitement going.”