Gloria Steinem Talks About the Benefits of ‘Women Together’

The legendary activist was the featured speaker at an Eileen Fisher-sponsored event intended to empower women to connect with each other.

Steinem was the featured speaker at a full-day program intended to empower women to find their voices and connect with one another. The ticketed event, with 90 attendees, was also live-streamed before an audience of 235 people. It took place at the Eileen Fisher Learning Lab in Irvington, N.Y.

“I believe a collective energy emerges when women connect with other women,” said Eileen Fisher, founder and chairman of her brand. “Our Women Together events offer meaningful opportunities for women to connect more deeply — with themselves and one another.” She said her goal is to do these events once a month.

Steinem, who has been leading women in the movement for decades, was asked by Antoinette Klatzky, executive director and co-creator of the Eileen Fisher Leadership Institute, what’s important in this moment about women coming together.

“Well, that you do it,” said Steinem. “We are communal animals as human beings. We can’t function all by ourselves. There’s a reason why solitary confinement is torture,” said Steinem, dressed in her usual black sweater and pants, with a wide black belt accented with a striking gold disc.

“We need to be together. We’ve been sitting around campfires for hundreds and hundreds of years with everyone able to speak. There’s nothing more fundamental than what you’re doing right now,” said Steinem.

What’s especially important now is that women talk to each other considering that people spend an average of 11 hours a day in this country looking at a screen, said Steinem. “Technology is great. I love books, too. You don’t generate oxytocin, which allows you to empathize with each other, unless you’re together,” she said.

The conversation turned to Steinem’s 1992 book, “Revolution From Within.” She was asked about the experience of writing it and whether there was an “a-ha” moment where she felt the need to go inward.

“It’s true that we write what we need to read. I imagine that I was writing it for other people. I was wandering  around the country and being an organizer, and there were lots of books about external change and lots of books about internal change, but nothing that said the two things went together. I thought I was writing it for other people, but of course, it changed me too as I was writing it,” she said. “It gave me compassion for my earlier self. It made me less judgmental and I realized that nobody wants the golden girl administered by masochists,” she added.

Steinem said that women need to learn to treat themselves as well as they treat others.

Klatzky brought up the fact that when women go into a fitting room with a friend, they’re so complimentary. But when they look at themselves in the mirror, it’s a totally different conversation.

Steinem agreed, saying that when a woman walks past a mirror and criticizes her body, “a girl is watching.”

“Even if we can’t quite do it for ourselves, we need to do it as an example. We need to walk in and look in the mirror and say, ‘I look fan-f–king-tastic, she said.

“We live in a patriarchy and a racist society.…Oppressive systems wouldn’t work if we didn’t internalize them,” she said. So how does one break free of that?  “I don’t know.,” she said. “Imagine if your 10-year-old self were watching you. I say 10 because 10 is an age before your gender hits usually. The gender roles come down on us in the middle of life and turn us into zombies. Before you were 10, you were maybe climbing trees and saying, ‘I know what I want, and I know what I think,’ and it’s still in you,” said Steinem.

Surveying the crowd, she said, “I am the oldest person in this room. I am 85,” to which applause broke out. “You get a hand just for saying it,” she joked. “That tree-climbing little girl, pre-gender, comes back, because now you have your own apartment and your own money. Because you’re supposed to fear age, I just want to recommend it.” 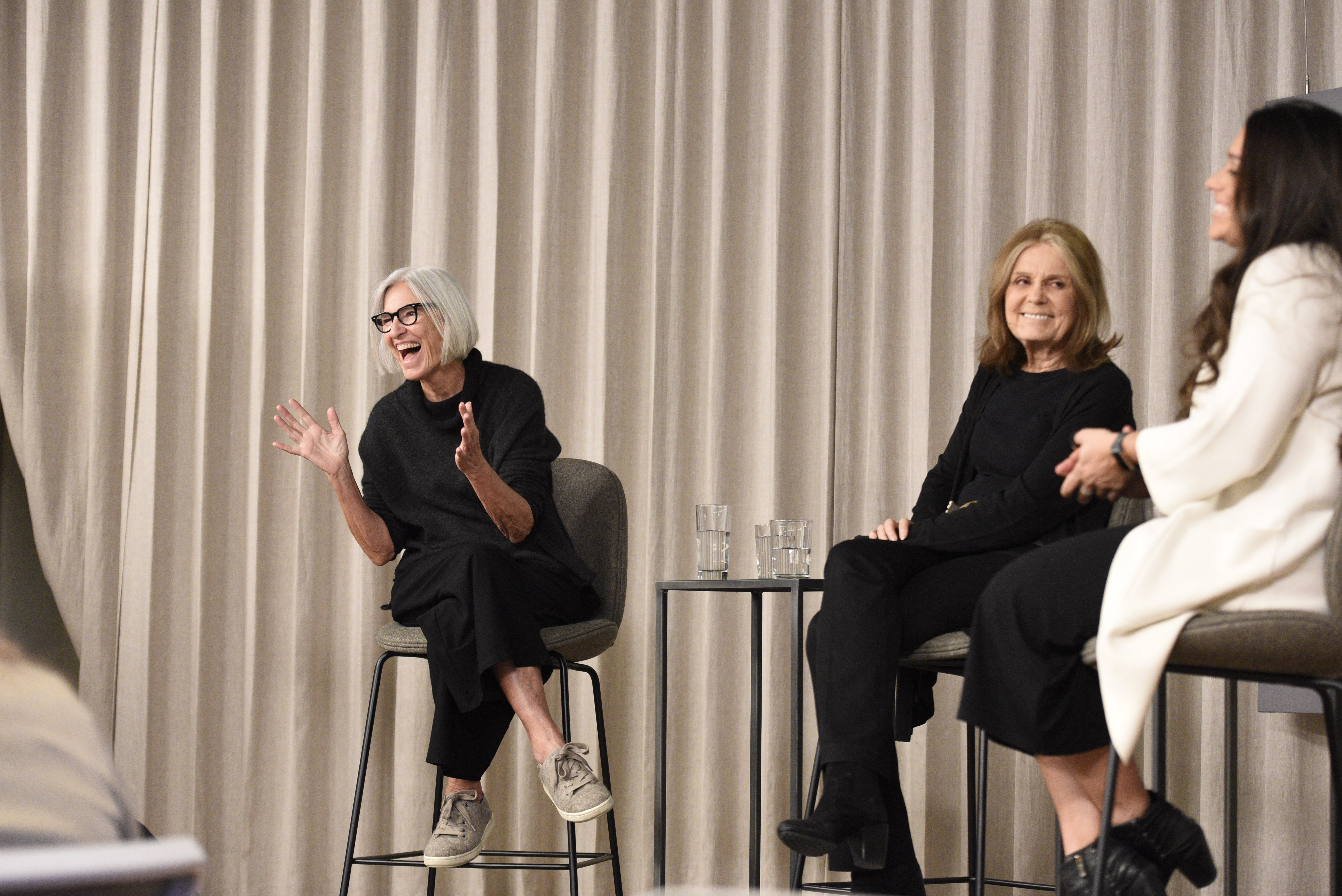 The activist recalled how her unorthodox upbringing had a big impact on her life.

“I had some lucky things in my life. I didn’t go to school very much until I was 11 or 12, so I missed a lot of brainwashing,” said Steinem, citing “Dick and Jane.”

“I also had a father who was proud of two things: he never wore a hat and he never had a job.” At the time, although she wanted to have a picket fence and be like other kids, she said she later realized it was a great thing, because she never really had a job, either, and has been a freelance writer and organizer. She said she lived in India when she graduated college, which totally changed her life. Further, she said, “I never spoke in public until I was 35. I was terrified. I still have a hard time with it.…I lose all my saliva,” she said. “Fear is a sign of growth so follow the fear, it will tell you where to go.”

Steinem also told the women that one doesn’t learn from sameness, but learns from difference. She said when one is in a group and has more power than others in the group, one needs to remember to listen more than talk. “Which is a great thing, because you do not learn if you’re talking,” said Steinem. She said that if one has less power, one needs to learn to talk as much as one listens.

Asked how a person should speak in a way that’s graceful, Steinem responded, “Why be graceful? Whatever it is, is usually a problem because you’re trying to keep it secret. Because I didn’t speak until I was past 35, at first I only did it together with other women. If I just said I was nervous, I got sympathy and it broke the spell. It turns out public speaking is right up there with death.”

An audience member said Steinem changed her life when she was an undergraduate at Brandeis University in 1985 and wrote her senior essay on Ms. Magazine, which she called “Ms. Magazine: The Mirror of a Movement, or Just Another Women’s Magazine?” She said it was completely the mirror of a movement. She said she read a Ms. magazine article by Jane O’Reilly about the “click!” that happens when one becomes a feminist.

“Knowing history is helpful…but I don’t think our job is to make young women grateful,” said Steinem. “I think it’s to make them ungrateful so they keep going. That’s why we need lots of different ages in organizing groups. They see how bad it is, they’re mad as hell. We need that anger. We each have something to bring to the table and help the other person. If we value living in the moment, which happens to be the only time we can live, it’s kind of more important than knowing about the past.”