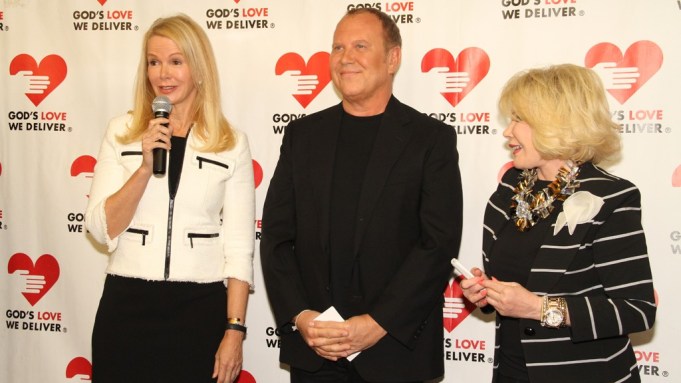 The jokes were a given with Michael Kors and Joan Rivers on hand at Wednesday’s launch of the God’s Love We Deliver expansion project.

As the lead sponsor, thanks to a $5 million donation, the designer was the guest of honor at the groundbreaking for the nonprofit’s New York headquarters that will bear his name. The group’s SoHo space will more than double to 44,000 square feet, enabling volunteers to churn out two million meals a year compared with the current rate of one million.

“I am going to make it brief, because we really just want to get to the cake. It has your name on it, did you see?” Rivers asked, referring to the Lulu Cakes confection, with a rendering of the new building.

“Oh thank God,” Kors said. “First off, I have always wanted to wear a hard hat. No, I’m joking. I’m half Jewish, half Swedish and the Swedish side has a very huge head, so hats are not my friends.”

Having never dreamed he would have even one store with his name on it, never mind more than 400, Kors described the God’s Love building as “extremely gratifying,” noting “meals will be served to people in need who cannot feed themselves with no questions asked.”

A GLWD board member, Kors said, “I have been working with them for 25 years. They began the initiative in the Eighties. That was when many people in New York, in the fashion industry and beyond, people who were my friends, coworkers and colleagues, began dying of AIDS. Since then, their work has expanded to reach all of those in need of hot meals delivered.”

Afterward, Kors told WWD how there is always more to be done: “Your kids can deliver a meal. You can chop a carrot. We can all do something.

Rivers agreed, having seen lives changed and burdens lessened. The same would be true of her view of Kors. “I knew him when he was just a simple designer before he became a mogul,” she said. “He’s always been adorable, funny and modest. He is so not of the breed. This is a boy from Queens who has done it all himself, no handouts, just a lot of hard work and the stuff is so great. The first thing I bought from him in the Eighties was an orange molten cape. I still wear it. His stuff is so classic. It doesn’t wear out — you have to shoot it.”

As for her Oct. 14 showdown with the Writers Guild of America about her potential expulsion, Rivers insisted she would hold a press conference as soon as a decision was reached. When asked how long she has been a WGA member, Rivers said, “I’m a union girl. I carried signs in the Seventies. I can’t say anything about anything until I walk out of kangaroo court.”