An elegant theatricality, a dark cross-cultural vision and opulence laced with bold flourishes are some of couturiers' dramatic notions for fall. 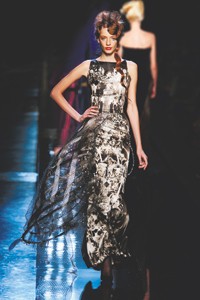 An elegant theatricality, a dark cross-cultural vision and opulence laced with bold flourishes are some of couturiers’ dramatic notions for fall.

Jean Paul Gaultier: “Beauty and the Beast” might just be the perfect fashion fable, rich as it is with irresistible counterpoint — male and female, good and evil, light and dark — with true beauty conquering all in the end. Taking his cue from Cocteau’s Surrealist version of the story for his collection on Friday, Jean Paul Gaultier had a haute field day, closing out this most peculiar season on a soaring note.

The designer has worked his share of megathemes and handled this one deftly, almost never sacrificing chic for a sight gag, even while extending his models’ hair into perfectly molded top hats, morphing a chandelier into an evening gown or providing a stuffed rooster a permanent perch on the sleeve of a somber black coat. For that matter, cutting a chiffon gown to mimic the human skeleton while looking fabulous is no easy feat, but such skill is what couture is about.

All of Gaultier’s beloved classics appeared in stunning new variations: intricate knits in mesmerizing horizontal jacquards, a shiny python trench trimmed in silver fox, confident pantsuits and more fur than in the rest of the couture combined, in gorgeous sweeping coats as well as an especially audacious and beautiful velvet hourglass gown encircled by a full fox.

It all looked the essence of elegance.

Givenchy: Yes, he’s talented. But a guy can only run on the ticket of talent-soon-to-be-realized for so long. In the Givenchy collection he showed on Thursday night, Riccardo Tisci did nothing to speed his flowering as a true couturier. Rather, he again let deep-thoughts pretension detract woefully from what was good about his clothes.

Tisci sees the world darkly, and certainly fashion always needs what might be considered alternative, aggressive visions. That said, the six-figure world of couture, whose constituents shell out for two reasons — to feel good and look pretty — is probably not the perfect pulpit. Even if it were, to date Tisci has seemed more focused on his story line than his fashion message; at this point, does anyone know what Givenchy stands for?

The show was something of a cross-cultural trek, filled with tribal references from various locales — Africa, India, Burma — although exactly what a snappy coat in panels of deep-toned cashmere and leather has to do with Bosnia was not readily apparent. What was evident is that Tisci is an accomplished tailor with a fine knack for both cut and unfussy decoration. If he would bother to translate those into a clear point of view before trying to be the Dark Side’s Busby Berkeley, both his house and his audience would be the beneficiaries.

Elie Saab: After several years of watching Elie Saab parade his wares on the Paris couture runway, one has come to expect the expected from this Beirut-based designer. But as the old saying goes: “If it ain’t broke, don’t fix it.” After all, Saab claims to sell as many as 800 dresses a season, which would make his house one of couture’s top sellers. Decorative flourishes remain his calling card, and they abounded this season, with sequins glimmering on everything from long bustier gowns to Empire-waist organza dresses. When that wasn’t enough, he added ruffles and bows on flowing, high-slit, plunging confections. But one can’t take Saab to task. He doesn’t hide his game — these are gowns for women who want to feel glamorous in the most primitive way, and he accomplishes that task with bravado.