The countdown is on for the 2007 awards season and the stakes are high for designers who will dress the elite walking the red carpet.

By Marcy Medina and Rachel Brown on January 3, 2007
View Slideshow 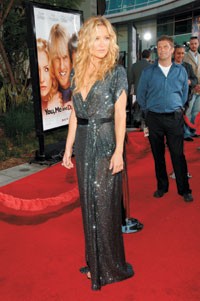 LOS ANGELES — Fasten your seat belts. The countdown has begun for the 2007 awards season.

The entertainment industry will anoint actresses, actors, directors, singers, composers and costume designers, among others. The stakes are high, as well, for designers who will dress the elite gliding down the red carpet and retailers seeking to bask in the glow.

The linchpins are the stylists who pick the gowns and accessories and the hair and makeup professionals who concoct just the right look.

The festivities begin with the Golden Globes on Jan. 15, followed by the Screen Actors Guild Awards, Jan. 28; the Grammys, Feb. 11, and the Oscars, Feb. 25.

Here are some of the emerging behind-the-scenes stars:

Growing up in Ohio and Indiana, Bardo wasn’t exactly exposed to a range of careers available in fashion. She studied fashion photography, but traveling with a boyfriend to London and Paris broadened her horizons. While assisting uberstylist Andrea Lieberman for three years, she met Kate Hudson, as well as Jennifer Lopez, a Lieberman client who hired Bardo to be her full-time stylist for six months. Once she was a free agent, Hudson called and said, “‘Are you still styling? I hope so, because I need someone,”’ Bardo recalled. Her approach to all her clients is “super-relaxed and effortless. I don’t want anyone to look like they are trying too hard.”

She has a degree in photography from Cal Polytech University, but Chavez ended up riding an “O.C.” wave to her present vocation. After interning in the costume department of a Disney movie, Chavez landed a gig for the pilot season of “The O.C.,” where she was in charge of Rachel Bilson’s wardrobe. The two soon realized they had the same taste and began working together on the red carpet. While she’s fond of putting her petite pals in Brian Reyes, Zac Posen, Marc Jacobs and J. Mendel, she indulges her avant-garde side with model-turned-actress Jamie King. “With her, I have height on my side so we can go really fashion forward.”

This story first appeared in the January 3, 2007 issue of WWD. Subscribe Today.

Lovell began her fashion career in public relations, working for an agency in her native London that counted Burberry as a client. She found herself styling shoots, and realized that she preferred dressing personalities for real life rather than models for photo shoots. She arrived in Los Angeles two years ago, where she met Ginnifer Goodwin, now a star of the Golden Globe-nominated HBO show “Big Love.” While she’s won raves for putting Goodwin in Moschino, Marc Jacobs and Burberry, Lovell said she doesn’t follow trends per se, but rather a client’s personality. “When you do something so personal for someone, you have to get along, and the more honest you are, the better the results,” she said.

As an art major at the University of Colorado, Jagger dreamed about dressing the stars she saw in music videos. That led to a fashion internship at Nylon magazine and a gig as Rachel Zoe’s assistant in New York. When Zoe moved west, Jagger followed, and once she was on her own, began working on videos as well as red-carpet jobs. “Videos are about creating a story, and red carpet is about being appropriate to the occasion,” she said, “but I don’t want people to say about my clients. ‘Oh, that’s the girl who always shows up in a black dress.’ I like to keep it interesting.”

Swennen studied design at Cornell University, then was an intern at Barneys New York, where she met Andrea Lieberman and became her intern. She switched coasts and assisted Rachel Zoe before going out on her own. From Lieberman, she learned to create tour and video costumes for pop stars, and from Zoe, the finer points of red-carpet glamour. “With a video I can go all out, but with red carpet, I make sure it’s toned down since you have to play it safe these days, unfortunately,” she said. “But I am willing to risk getting panned a little bit more because I see it as an art and I also represent peoples’ personal tastes.”

A 12-year veteran of film and television costuming, Harris counts films like Drew Barrymore’s “Charlie’s Angels: Full Throttle” and “Spider-Man 2” and “3” among his credits. But he said his most exciting and challenging stint was working for three seasons as a wardrobe shopper for TV’s “Ally McBeal,” where he met Lucy Liu. “I feel that it is my job to think, edit and select the perfect pieces for fittings so that my clients don’t have to spend hours and hours trying on dresses,” he said. “They have more important things to do.”

Abergel’s background is the stuff of a Hollywood screenplay. At nine, he was shipped to Los Angeles to live with family friends after his father, an Israeli Black Panther, was arrested. At 13, Abergel joined American Ballet Theatre. Three years later, he tore his foot muscles and was forced to find another profession. A friend introduced him to hairstylist Arthur Johns, and under Johns’ tutelage, Abergel learned the business. Ten years later, Abergel, now 29, has built a star-studded résumé. At this year’s Golden Globes, he’ll style the tresses of Jennifer Garner and Anne Hathaway. “I am so passionate, it consumes me,” he said.

Growing up in San Francisco, Goodwin experimented with her style. “I have had every lip and hair color you can imagine,” she said. Goodwin remembers watching her mother, clad in Norma Kamali, applying bright Dior colors to her face. Goodwin first tested her skills in a student film where corpse-like was the preferred look. Ten years into Goodwin’s career, the 33-year-old is drawn to women willing to take risks. “With someone who you have been with for a long time, you have a dialogue,” she said. “The best things come out of a long relationship.”

Fresh out of the Studio Make-up Academy in Hollywood, Quynh’s vision of professional success was the MAC counter at Nordstrom. “Once I got there, I liked it, but I didn’t love it,” she said. Her career got a boost assisting Stila creator Jeanine Lobell. After Lobell moved to New York, Quynh began assisting makeup artist Paul Starr before a two-and-a-half-year stay with Pati Dubroff. Quynh learned a critical lesson from Dubroff: Remembering names and returning calls can win jobs. “I [treat] everyone individually. I try to add my own little touch to it, but still make them look like themselves,” she said.

Failing to make progress shopping her makeup portfolio to agencies, Bongiorno strutted into the Garren Salon at Henri Bendel and introduced herself to Garren’s associate, Thom Priano. “That is how my whole career got started,” she said. Bongiorno has developed a reputation for creating beautiful skin and smoky eyes. “I love glamour,” she said. Eva Longoria’s editorial and red-carpet looks are Bongiorno’s work. In her teens, Long Island-bred Bongiorno spent Saturdays as the shampoo girl at the local salon. Determined to have staying power, she started her own cosmetics line, Enjoué Beauté, a year ago.