While singer-songwriter Lady GaGa was in town here to play Lollapalooza, her itty-bitty black HotPants and high boots proved too much for one of Chicago's finest. 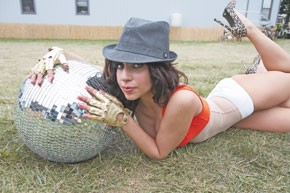 CHICAGO — While singer-songwriter Lady GaGa was in town here to play Lollapalooza, her itty-bitty black HotPants and high boots proved too much for one of Chicago’s finest. “You need to put your ass up against the fence,” the officer ordered. “There are children around here.” One citation for indecent exposure later, Lady GaGa remained amused. “There’s a huge festival with people doing cocaine and marijuana, and he’s busting me?” the 21-year-old New Yorker asked, adding jokingly, “I really wanted to get cuffed in a jumpsuit.”

Welcome to the wild, wacky world of Lady GaGa, an exhibitionistic performer who is turning heads, whether it be for her penchant for wearing underwear as outerwear or for her catchy, if somewhat recycled, Eighties-influenced synth pop songs. Although she has no qualms about lowering her keyboard to purposely bend over to reveal her cleavage, Lady GaGa prefers not to reveal her original name. “She’s not here anymore,” GaGa quipped about her alter ego. “She’s covered in sequins.”

Maybe that’s because her past seems a far cry from the 42nd Street stripper shops she frequents for fashion finds. GaGa, formerly known as Stefani Germanotta, the daughter of an Internet entrepreneur and a telecommunications executive, grew up on the Upper West Side and attended the all-girls Convent of the Sacred Heart with heiress Nicky Hilton. Not surprisingly, it wasn’t a perfect fit. Gaga got into trouble for hiking up her uniform skirt and wearing Converse sneakers. The fact that she arrived for class each day in full makeup and curled hair also didn’t go over well.

“What are you, a lesbian? No one’s looking at you,” her classmates teased, GaGa said. “But I’m into theatrics,” she noted. “Every morning I like to look fabulous. I like to pretend I’m famous.”

Though she’s not yet that celebrated, the girl who didn’t fit in in high school is getting noticed now — something that sets Lady GaGa aglow.

Signed to Interscope Records but yet to release her first album, GaGa, who began playing the piano at age four and sneaking out to play coffee houses at 14, gained a following through her cheeky pop-burlesque shows at New York clubs and online. Fans could download songs “Boys, Boys, Boys,” “Beautiful, Dirty Rich,” “Disco Heaven” and “Dirty Ice Cream” from her MySpace page.

This story first appeared in the August 13, 2007 issue of WWD. Subscribe Today.

GaGa, who go-gos on the side and takes cues from Cher, David Bowie and Madonna, makes no excuses for her style. “This is my daywear,” she explained, indicating her animal-print bikini, pink sequined belt, black spandex leggings and black patent heels bought in a stripper shop. “I’m not comfortable in a T-shirt and jeans.”

The performer, who describes her look as “filthy, unacceptable,” makes some pieces herself, shopping at Manhattan’s M&J Trimming. She also buys ready-made leggings at American Apparel and gear from stripper shops on 42nd Street. “You know where they have the 25-cent video booths?” she asked. “Upstairs they have clothes.”

Her DJ partner in crime is Lady Starlight, a “30-ish” sister go-go dancer who performed in a neon-green bikini and an Iron Maiden denim vest.

“When someone sees a girl in a two-piece out on the town, people think she’s a ho,” Lady GaGa said. “We think that’s awesome. It’s rock ‘n’ roll. [Something more conservative would be] like David Bowie doing Ziggy Stardust in a sweat suit. No one wants to see that.”

Lady GaGa doesn’t stop with a bikini and black eyeliner. She’ll throw in some granny pants underneath for good measure. “It’s got to be funny,” she said of her everyday attire. “I live for being different.”

That quirkiness brightened her show, which at times could seem unpolished. At Lollapalooza, a giant disco ball descended into the middle of the stage and Ladies GaGa and Starlight stood, frozen arms in the air, complete with fog machine for campiness. Between songs, they doused their dark tresses with cans of aerosol hair spray before attempting to set a stream of spray on fire.

“I didn’t want to sing about getting my heart broken or world peace,” said Lady GaGa, who performed in a bra she had glued with rows of mirrors to resemble a disco ball and skimpy black panties with mirrored trim. “Fashion and attitude and style, that’s what we breathe for. We joke that our full-time boyfriend is our vanity.”

So Lady GaGa, who’s not above doing some pole-dancing or spastic dance moves on stage, sings about partying, hangovers and text messaging boyfriends. “It’s a party,” she said. “Everything my [high school] friends made fun of me for is what people want more of,” she said. “More sequins, more spandex, yes, please.” Except, perhaps, one of Chicago’s finest.