Going Out On A Limb

The impetus for many ideas is sheer frustration.

Such was the case for Phoebe Cates Kline, the actress who is best known for her roles in 1982's "Fast Times at Ridgemont High" and 1984's "Gremlins." Last October, she opened a store called Blue... 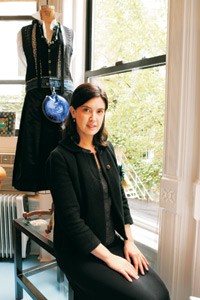 The impetus for many ideas is sheer frustration.

Such was the case for Phoebe Cates Kline, the actress who is best known for her roles in 1982’s “Fast Times at Ridgemont High” and 1984’s “Gremlins.” Last October, she opened a store called Blue Tree at 1283 Madison Avenue, after not being able to find random things in her Manhattan stomping ground of the East 90s.

“There’s something particular to this neighborhood, because you can’t buy a CD, a kid’s present or an extraordinary piece of jewelry here,” says Cates Kline, 43, who has lived in the vicinity with her husband, Kevin Kline, and their two children for 13 years.

Cates Kline opened Blue Tree to provide her and her neighbors quirky but beautiful women’s, men’s and children’s clothing; beauty products; housewares; haute chocolates; special trinkets, and jewelry and other accessories. The store’s name, she says, was inspired by her favorite early 20th-century art movement, Fauvism, in which artists like Paul Gauguin, André Derain and others painted in wildly bold hues like indigo.

“We are very focused on fashion, and people just come in the store and go right up the stairs to find individual pieces that they aren’t going to come by too often,” says Cates Kline, whose specialty is seeking out designers in Paris, London or New York who are unknown Stateside. To wit, she prides her store on being the sole U.S. retailer of brands like Herome Tsuyoshi, Gaxotte Jewelry and Arni & Carlos.

Cates Kline contends that she never had a particular affinity for fashion while she was growing up in New York, although she worked at estate jeweler Fred Leighton as a teenager and is a close friend of designer Anna Sui. But Cates Kline, who stopped acting full-time in 1994, loves her new role.

“I started acting and modeling so young that at a young age I craved a normal existence, dealing with people who have no preexisting idea about you,” she says. “I love working with people, and helping customers, as well as interacting with vendors directly.”

As for the shopper coming to Blue Tree for a brush with fame, Cates Kline says, “[Sometimes] I get calls [saying], ‘When is Miss Cates going to be there?’ and I just come up front. People get over it really quickly. Occasionally, initially, they’re tongue-tied.”

One of Cates Kline’s favorite categories in Blue Tree is accessories.

“Accessories are where it’s at,” she says emphatically.

Here, Cates Kline shares with WWD her top 10 favorite discoveries, from fine estate jewelry to a felt handbag she codesigned, all of which can be found beginning September exclusively at Blue Tree:

Christian Peau
“For fall, we did a boot that looks like a Depression-era work boot,” says Cate Kline, referencing the Japanese company that makes all its shoes by hand using natural dyed leathers. “They look like what a chic hobo would be wearing in the Thirties or Forties.”

Isabel Marant
“She’s a famous clothing designer in Paris, and we just bought her accessories,” says Cates Kline, who has thought of many uses for Marant’s coin-purse necklace. “It’s a great place to put your jewelry during a manicure, or keys or little parking tickets. The other day, my daughter’s tooth fell out on the street and I wished I had it with me.”

Katherine Wallach
“We worked together on carved coral cameos of unusual subject matter,” says Cates Kline, adding that gnomes, mushrooms and animals like pigs and chimpanzees are included for the coming season. “They’re really simple, so it looks like a beautiful, palatable cameo.”

“I have an old pair of cuffs from YSL that I wore a lot at night, but now I wear these all the time,” she says.

Ninoff for Blue Tree
“I codesigned this bag based on one that I got in Denmark,” says Cates Kline. “It’s the perfect bowler shape with no zipper. I can’t take credit for designing this, but I do like customizing things.”

Karen Monny
“[Karen] made different pins and collars that she embroidered,” says Cates Kline. One of her favorite pieces from Monny, a Paris accessories designer who does bags, collars, belts and hats, is a red velvet capelet with plush mushroom brooches at the collar. “There is a classic mushroom theme throughout the store,” adds Cates Kline.

Mellen Ford at Blue Tree
Cates Kline once carried a selection of estate jewelry from her former boss, Fred Leighton, but now Blue Tree has a new estate jewelry collection from Mellen Ford, owned by Billy Ford and Deborah Mellon. “They’re talented and really low-key,” says Cates of the jewelry duo. “They are old-fashioned in a way, but in all the right ways, and they want to keep [prices] reasonable.”

Lars Anderson
“To call them shawls would be criminal,” says Cates Kline of Anderson’s knits. She ordered the open-knit cashmere and silk wraps in brown, slate, green and red to pair with skirts and pants from the New York designer.

Mina Poe
“I just leave it up to her,” says Cates Kline of her selection of Parisian designer Mina Poe’s wares. Poe is known for her intricate knits and colorful embroidery in shawls, belts and bags. “Her stuff is whimsical and one-of-a-kind.”

This article appeared in WWD “A”, a special publication of WWD available to subscribers.