NEW YORK — In these frequent-flyer days, a whirlwind, globe-spanning trip may take no time at all, but Rena Lange designer James Waldron was still inspired by the glamorous notion of “Around the World in 80 Days” when he was creating... 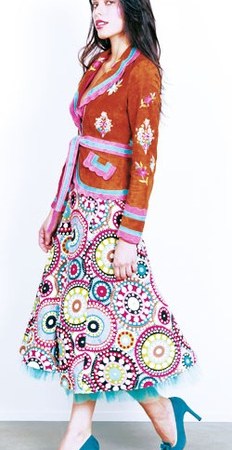 NEW YORK — In these frequent-flyer days, a whirlwind, globe-spanning trip may take no time at all, but Rena Lange designer James Waldron was still inspired by the glamorous notion of “Around the World in 80 Days” when he was creating his fall collection. He and Daniel Günthert, the company’s managing director, were in town on Tuesday to show the lineup at the Mandarin Oriental in a room that offered a bird’s-eye view of Christo and Jeanne-Claude’s “The Gates.” The two also presented their higher-priced Premium line and a capsule collection of made-to-order black-and-white gowns.

In both the Premium and signature collections, Waldron used a kaleidoscope of bright colors for thin knits, wool tweeds and crinoline-puffed skirts with a giant circle print. “I wanted to go a little bit more funky,” said Waldron, noting that some of the brighter patterns also will make their way onto a few pieces of luggage for a complete on-the-go look. With the global motif in mind, Waldron used fabrics from France, Italy, India and Japan. “I go with whoever comes up with the coolest ideas,” he said. But ever careful to keep Rena Lange’s core clientele happy, he did plenty of the house’s signature natty tweed suits and bouclé jackets and skirts, as well as a sophisticated black-satin skirt with ribbon-embroidered circles. “It took 150 meters of ribbon to make that,” Günthert explained.

Retail prices for Premium range from $695 for a cashmere sweater to $7,995 for a fur-trimmed coat, and only 100 of each piece will be produced. For the main collection, prices run from $495 to $3,595, which are 20 percent less than last season. “We no longer live in ostentatious times,” said Waldron of the price shift. But, he added, there’s been no change in the quality or in the details. “Understandable embellishment gives the collection a feeling that is right for now,” he said.