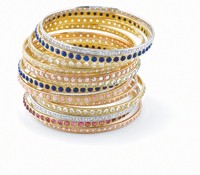 LAS VEGAS — Gold is hot, but price volatility doesn’t seem to have stymied the desire for it.

Many fine jewelers have raised prices by as much as 20 percent because of the fluctuating cost of gold, which hit $725 an ounce in May and fell to $574 on Friday. Still, buoyed by consumer demand, retailers are buying, albeit cautiously, for their holiday inventories.

At the Couture Jewellery Collection & Conference, Luxury by JCK, JCK and Signature Salons shows here this month, fine jewelry manufacturers and retailers said they were going forward with gold-intensive designs. The shows offered many artisanal and distinctive looks.

“We are conscious of the higher price of gold and just continue to buy exciting, beautiful pieces,” said Stephanie Lee, buyer for fine jewelry and watches at Barneys New York, who invested in pendant necklaces. “Clients continue to make major personal purchases. There is a tremendous interest in jewelry right now. We foresee a strong holiday.”

Most vendors and retailers projected a 5 to 10 percent gain in sales over last holiday, compared with recent years in which they experienced high double-digit growth. Some said the self-purchasing customer, who spends from $500 to $4,000 on a piece of jewelry and was considered a factor in the success of fine jewelry in recent years, will be affected most by the price increases.

“I don’t know if we can continue to have the double-digit increases of the past,” said Larry W. Pelzel, vice president of corporate precious jewelry for Neiman Marcus, who bought heavily into pearls and opera-length necklaces. “Precious metals are going through the roof. An item that last year [might have been] $1,500 is now $2,200. But we are projecting a strong season. It’s really about creating the buzz and having the right product mix.”

Although many retailers are keen to find new design talent, aggressively marketed brand names such as John Hardy, David Yurman, Charriol and Judith Ripka are many stores’ bread and butter. And private equity firms are taking note.

“We are getting quite a few inquiries from private equity firms about some of the jewelry companies,” said Mitch Kates, associate director of strategic services for Kurt Salmon Associates, a retail consultancy. “It is an area of increasing interest.”

There are a few deals in the works, said company representatives, who spoke on condition of anonymity and didn’t reveal details.

Sales of gold jewelry hit a six-year high in the U.S. in 2005, increasing 4.4 percent, compared with a 4 percent gain in 2004, according to figures compiled by GfK Audits & Surveys and released by the World Gold Council in May. It was the 15th consecutive year of gold jewelry sales increases. Still, many retailers said when gold goes up and is in the news, their customers want more because they perceive it to be more precious than ever.

“Even though it’s softened [in price] a bit, gold is a buzzing category right now,” said Harvey Rovinsky, president of Bernie Robbins Fine Jewelry, which has nine stores in Philadelphia and New Jersey.

Rovinksy even bought into 24-karat gold for the first time, from the likes of Gurhan and Yossi Harari, which both specialize in pure gold.

“We don’t find the increase in gold as a negative,” Rovinsky said. “There’s a perceived value to it.”

Darrell Ross, president and ceo of the Cranston, R.I.-based Ross-Simons, which has 15 stores and a large catalogue business, has been trying to absorb price rises since last year and not pass them along to consumers. He remains optimistic about holiday sales.

“We didn’t react as gold went to $700, now it’s at $600,” Ross said. “The ultimate price won’t be as steep as the volatility indicated in April and May. Things are settling down.”

David Yurman has increased prices of some of its jewelry on a piece-by-piece basis.

“I feel positive right now,” said David Yurman, designer and chairman of the firm. “Seven years ago, [jewelry] was less important. Even if clothing becomes less important, this is the time for accessories,” he said, adding that when clothing gets more minimal, people want to add a bit of sparkle.

Key trends at the shows included rich, colored stones such as garnet, onyx and green tourmaline, as well as gray Tahitian pearls, complementing the moody hues shown in fall ready-to-wear. There was also a movement away from bling to more understated looks. Although pavé diamond accents were incorporated in hoop earrings, cocktail rings and other categories, and rose-cut diamonds were popular, the overall use of diamonds waned.

Sautoir necklaces with large pendants were widespread, like those from David Yurman’s silver and diamond Tapestry collection and Kwiat’s white gold version interspersed with fobs of onyx and pavé diamonds. Pieces with gold openwork were also dominant, as shown by Calgaro’s blackened silver and gold multistrand necklaces and bracelets, and at Diamonds by Erickson Beamon, whose diamond-studded collars and shoulder duster earrings had a tattoo-like feel.

Scott Colee layered a rutilated quartz cabochon over onyx in necklaces, earrings and rings that were set in yellow gold, to complement the dark and heavy clothes for fall. John Hardy offered sculpted silver pieces with hand-wrought filigree on the backs depicting scenes from Bali, where the firm is based. Ray Griffiths showed a bracelet of faceted rock crystals mounted in nets of yellow gold, while Stephen Dweck offered an oversized chain-link bronze bracelet with tiny flowers and other patterns.

Overall, retailers were busy filling their orders, despite price increases, in hopes of a successful holiday season.

“We reacted to the price increases by gasping, but we went in for the plunge,” said Lisa Moskowitz of J.L. Rocks, which has two stores in Connecticut.

Moskowitz’s partner, Jamie Camche, added: “People notice it on small items, not on larger items, but it hasn’t stopped us from purchasing. This has been our biggest buy ever. We had a great third quarter. When we go to the show with optimism and money in the bank, we’re aggressive.”