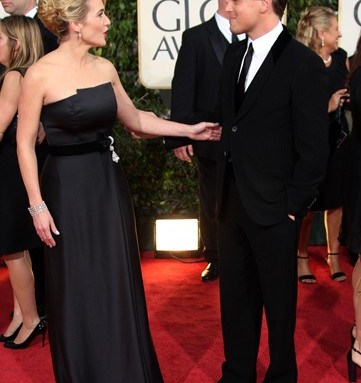 The Golden Globes were back — albeit a bit more low-key — after falling victim to last year’s writers’ strike, and stars wasted no time getting back into the swirl. “I was nominated last year, but this is actually my first Globes, and I’m having fun,” said Amy Adams, who was nominated for her supporting role in “Doubt.” “It feels really open and relaxed.” Perhaps Adams was so chill because she’d had a lock on her Oscar de la Renta gown for two weeks prior to the show. “I fell in love with the dress when I saw it,” she said. “And I knew 100 percent when I put it on. ” All around her, the red carpet was clogged with fan favorites like Angelina Jolie and Brad Pitt, Tom Cruise, Tom Hanks and Susan Sarandon, who stopped to introduce son Jack Robbins to Jennifer Lopez and Marc Anthony. An actor on many attendees’ mind was the late Heath Ledger, who won for best supporting actor in a motion picture for his role as The Joker in ‘The Dark Knight.’

Gowns of every shape and silhouette were on show, in the obligatory black but also all-American red, white and blue. Stateside designers represented included Ralph Lauren, Donna Karan and Vera Wang, but the Europeans were represented in equal measure. There was plenty of couture from the Continent on display, including Armani Privé, which dressed Anne Hathaway, Penélope Cruz and Melissa George; Atelier Versace, who snagged Jolie, and Chanel Haute Couture on Cameron Diaz. And what award show would be complete without a few missteps? Drew Barrymore’s hair looked like she’d been caught in a wind tunnel on the way to the Beverly Hilton, while Renée Zellweger sported a terrifying tower of curls. But at the end of the day, the Globes are always a more relaxed arena to practice for award season’s main event, the Oscars. Rachel Griffiths, in Ralph Rucci couture, summed up Hollywood’s mood. “This is such a fun night, it’s about lounging at parties and enjoying yourself. That’s why I wanted a dress I could dance in.”