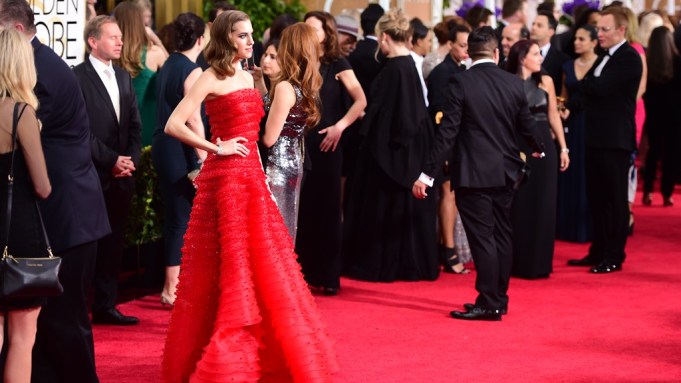 Perhaps chastened by past critiques of playing it too safe, quite a few actresses decided to go their own way at Sunday’s 72nd annual Golden Globe Awards, critics be damned. Emma Stone wore a jumpsuit with a crystal embroidered bodice and black pants from Lanvin, for instance, while Keira Knightley, Claire Danes and Anna Kendrick donned looks from Chanel, Valentino and Monique Lhuillier, respectively. And there were quite a few voluminous gowns on the likes of Kerry Washington, in Mary Katrantzou; Taylor Schilling, who wore Ralph Lauren; Felicity Jones, in dark teal Dior Haute Couture, and Jemima Kirke, in a silver-caped crop top and high-waisted white ball skirt by Rosie Assoulin. “It’s brilliant to be able to be yourself in your dress, instead of playing a role,” said Ruth Wilson of her green Prada sheath.

Julianne Moore, nominated for her role in the indie “Still Alice,” was also jazzed about her dress, a silvery beaded custom Givenchy with ostrich feathers at the hem. “Riccardo [Tisci] sent a few sketches for me to look at and this is what he came up with. I’m very lucky,” she said.

Jessica Chastain was already having a good time in her curve-hugging and skin-baring Atelier Versace, which also had a bit of copper thread to match her hair. “It’s not just a good-time dress, it’s…I’m stuttering because it’s so amazing…I feel like it’s some movie star character I’m playing in this dress,” she said. Well, she is a movie star, after all, and one who commands custom dresses made months in advance (she had her final fitting when she landed in L.A. on Wednesday).

Matt Bomer was celebrating even before he picked up his prize as best supporting actor for his role in the HBO movie “The Normal Heart.”

“This show is always a bit more fun, more relaxed. I mean, there’s alcohol on the table. And the only way to win is to have a good time. Even if you win, if you’re not having a good time, you’re really not winning,” he said.

While in the past the other halves of celebrity couples have stood back while their spouses ran the gauntlet, Sunday was a night of couples walking the red carpet together and none did so more prominently than George and Amal Clooney. The newlyweds arrived to much fanfare — he wore Giorgio Armani, she was in Dior Haute Couture — and breezed into the Beverly Hills Hilton, stopping only to sip a mini bottle of Moët & Chandon.