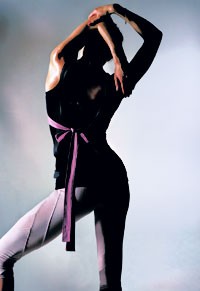 LONDON — Adidas is stepping further into the fashion arena with a new collection by Stella McCartney — but this time performance is as much a focus as style.

The two companies today will reveal the Adidas by Stella McCartney label, a full collection of performance activewear for running, swimming and fitness bowing for spring. The 58-piece line will include clothing, footwear and accessories made of high-tech fabrics and fashioned for everyone from amateur gym-goers to professional athletes. Prices will range from $48 (40 euros) to $242 (200 euros).

McCartney and Adidas will reveal the details of the project during a news conference at the new David Barton Gym on 215 West 23rd Street in New York. On Thursday night, they’re planning a party at Sky Studios on Broadway to celebrate the launch.

“This collection is straight from the heart — and it’s the real thing. It’s not about me designing a little pair of sweatpants,” said McCartney during an exclusive interview.

“Sports clothing for women is such an ill-addressed area. What I found out there when I started my research was really insulting and degrading: Head-to-toe baby pink or baby blue outfits. They were so bad, they were almost cool,” she said with a laugh. “And the performance-driven stuff just wasn’t attractive.”

McCartney, whose line is for the sport performance division of Adidas, said she tackled the project, which has been in the works for about seven months, on two fronts: Technology and fashion. “Every piece is technology driven. We were really true to that,” she said. Her other priority was to make sure the clothes looked good even outside the gym.

“Why should you have to sacrifice the cool or style factor because you’re working out? You should be able to stick a pair of heels on, and wear the same outfit to the pub.”

Michael Michalsky, global creative director of Adidas-Salomon AG, said the company chose McCartney because she is one of the most talented designers in the fashion business. “She has a great sense of color and gets the balance right between being feminine and being real. And she connects simultaneously with street culture, prêt-à-porter and bespoke tailoring. She’s a very underrated designer,” he said in a telephone interview.

Although Michalsky declined to give any details about the contract, he said the company was looking forward to long-term business opportunities. McCartney and Adidas collaborated once before in 2002 on a limited-edition sneaker. The company also works with Yohji Yamamoto on the Y3 fashion line, part of Adidas’ sport style division, and last spring linked up with Missy Elliott to develop a new fashion line, Respect M.E.

While the price points are far lower than those of McCartney’s signature line — a tank top costs $73 (60 euros), a bathing suit costs $91 (75 euros) and the most expensive piece, a hooded jacket, costs $242 (200 euros) — the designer said she has no fears about diluting her brand. “I hate the elitist element of fashion design. This is a product people can afford, and that’s a great thing. I don’t see it in any way as a dangerous thing for the brand at all.”

But don’t call it a secondary line. “This is a complement to my collection — but a very separate thing. It’s not a secondary Stella range. It’s really the technical aspect that is driving every garment,” she added.

As part of her research, McCartney polled sports stars and Olympic athletes including Steffi Graf, Laila Ali, Jade Johnson and Jo Fenn, about what they wanted and needed in sports clothing. Surprisingly, they didn’t focus too much on function. They simply told her they wanted more color in their wardrobes.

McCartney, a keen equestrian who runs and goes to the gym, also took a hard look at herself and realized just how out-of-touch she was about her own sports attire. She was used to running in any pair of sneakers she could get her hands on; she didn’t know or care whether her bathing suit was chlorine resistant, or if her tank top absorbed sweat in the right way.

The result is a collection featuring fibers that draw heat and sweat away from the body, fabrics that increase air circulation and special mixes of Lycra able to alleviate muscle fatigue.

Tank tops are fitted with fine metal threads that draw out sweat and help air circulate around the body. Running pants have special fabric panels that support the calf, while jogging jackets have built-in gloves (so rain and wind can’t blow into the sleeves), and a variety of hoods that suit different kinds of weather and physical activity.

The McCartney imprint is everywhere: Tank tops are long with a drawstring bottom so they can be slipped over a pair of jeans. Others have straps that can loop into a bow at the back or tie into a halter neck. Running and volleyball pants — as well as bathing suit bottoms — sit low on the hip.

One-piece bathing suits have performance tulle inlays, sexy cutaway details and halter tops. “The design does not at all take away from performance,” said McCartney. “I really hope to see women swimming at the Olympics in one of these,” she said, pointing to a photo of a one-piece suit.

Other fashion details include raw edging, laser-cut eyelets and off-the-shoulder styles for sweatshirts, and drawstrings on shorts and running jackets that can transform their look. The color palette is pure McCartney — filled with a rainbow of mauves, yellows, reds, blacks, cobalt, orange and sage.

McCartney has also added what she calls the Spider-Man element to some of the pieces. “I wanted to address the safety element of performance, too, so if you’re training on your own or running in the dark, you can feel safe,” said the designer, who fitted her running jackets with special pouches for reflectors, which come with the jacket.

In addition to 43 apparel models, there are eight accessories, including a yoga mat, volleyball and water bottle and seven footwear models, including the tri-colored Nimitta running shoe, which McCartney herself uses. The designer also plans to carry limited-edition Adidas by Stella McCartney footwear in her stores in London, New York and Los Angeles.

Although Adidas would not reveal sales projections, industry sources say the line could generate up to $15 million in first-year sales.

McCartney will take on new sports categories each season — she said she cannot wait to tackle a tennis range — and said it will be a challenge to design for winter sports. “I think it’s going to be really exciting to look at the cruel cold of winter and address that with a lightweight garment,” she said.