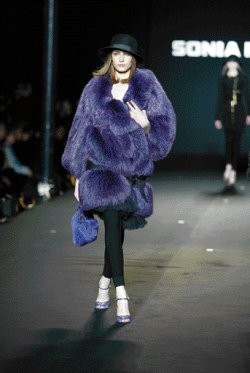 Y-3: Yohji Yamamoto clearly has his heart in Y-3, his collaboration with Adidas. This is only the collection’s second season, but the German athletic powerhouse hopes to expand it into a $300 million business, and Y-3 already has a crystal-clear identity. That imprint involves updated sports clothes with the distinctive proportions that are Yamamoto’s trademark. For fall, the clothes were deceptively simple at first glance. Models raced around a snow-driven set in tracksuits that had been altered a bit here and pulled a bit there. Jogging pants, for example, were cut as jodhpurs or featured stripes snaking around the leg, while Adidas’ three trademark stripes were positioned as sergeant stripes on a jacket sleeve. Yamamoto also played on the tracksuit theme by turning one into a jumpsuit. He stuck largely to a palette of blue and black, with bursts of color in the form of a big gold parka and a long, green print dress. The ultimate in street chic.

Cacharel: At Cacharel, Suzanne Clements and Inacio Ribeiro have proven themselves always ready to take on a new trend and make it cute. The Sixties influence has been huge on the runways in all four fashion cities, so it’s no wonder that the husband-and-wife duo got to swinging, sending out plenty of hyper-perky fare in pink, purple, orange and brown. A long striped T-shirt topped a purple chiffon mini, a tutti-frutti tweed coat came out paired with a crazy-daisy wool skirt bound in patent leather, and they also showed a pink paisley tent dress and pieces in graphic heart prints with a old-school bohemian bent. Some might find the collection too saccharine, but for a young customer, there are plenty of nostalgic looks here to bring to mind those days when granny took a trip.

Martine Sitbon: Mixing the sportif with the ladylike, Martine Sitbon created a sharp fall collection. The designer has always been a favorite of downtown girls, espousing an aesthetic that juxtaposes the tough and the sweet. In that vein, Sitbon started with knits featuring geometric stripes and then moved to a yellow-and-black plaid story, adding tulle to some miniskirts or dresses, while others shone with glitter. A parachute coat featured sequins, while sweaters and jackets came with detachable zip-off sleeves. For evening, her downtown girls waxed romantic with a parade of graphic gray and silver chiffon dresses.

Adam Jones: Adam Jones, a designer on the rise, has a deft touch with knitwear. He can take it and transform it into just about anything, including the fantastic knit sable, mink and fox coats he featured for fall. The show was staged as a happening, with models hanging out on a set resembling a downtown squat, reclining on a stack of mattresses or cavorting around a foosball table to the sounds of Eighties tunes. Although the styling was from that decade, Jones’ clothes had something more timeless about them — glamour. His silver fox jacket with knitted jacquard patchwork was wonderfully inventive, while his perforated leather pieces and tight knit dresses with lace interwoven with organza tulle were simply sophisticated and sexy.

AF Vandevorst: “We’ve been able to present a more complete image of the AF Vandevorst woman, how she acts and where she lives, in one film than in five years of traditional fashion shows,” explained Filip Arickx, who designs this Antwerp, Belgium-based collection with his wife, An Vandevorst. The movie in question was a romantic clip directed by fellow Belgian Mike Sleeckx. In it, models, arrayed in pleated skirts, trousers with suspenders, fake furs and trenchcoats with brass rivets, rode horseback across the windswept Belgian plains or lingered wistfully within the walls of a strange medieval castle. After the film, the clothes looked great in the showroom, too. They juxtaposed femininity and chic with a more contemporary edge, as in blue polkadot dresses or skirts decorated with brass rivets and a leather bustier covered with utility pockets. A strong effort.

Andrew Gn: He said he was inspired by romanticism through the ages, from the Renaissance to the Eighties, and that left Andrew Gn with plenty of ground to cover. But since he has such a firm idea of who his customer is — sophisticated, luxurious and chic — the designer pulled it off with an opulent fall collection of richly embroidered coats, silk camisole tops and miniskirts with braided trim. Gn has a knack for lavish embroidery — as in the Art-Deco motif featured on his Victorian-collared jackets, some topped off with fur, and his paisley velour coat with ribbons. Feminine frills, of course, are a top trend this season, and Gn also delivered those in the form of georgette blouses with lace-trimmed cuffs and fringed, bias-cut tiered skirts. Knowing your customer and giving her what she wants pays off.

Paco Rabanne: The house of Paco Rabanne is still futuristic. But artistic director Rosemary Rodriguez has enough Space Age sense to translate that futurism into the current fashion moment. Sure, there were plenty of Rabanne’s trademark, geometric-patterned plastic and metallic chain-link dresses in Pop Art colors such as orange and silver. But Rodriguez also managed to refresh the house’s fashion vocabulary by using metal links in a leather blouson or transforming metal into slinky metal-mesh knits. She displayed inventiveness, too, in the way she embellished the sleeves of a black chiffon dress with metallic elements or wove pearls into a dress of jeweled armor.