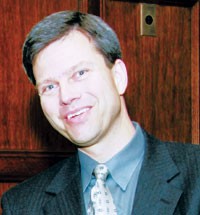 NEW YORK — Below the 300-square-foot stained glass, domed ceiling of the grand Gotham Hall, senior retail executives assembled and the WWDExecTech Retail Community Service Awards were presented. Former New York City Mayor Rudy Giuliani gave the keynote address and was on hand to congratulate the winners. Ten companies were feted for their yearlong community service efforts. A Benjamin Franklin inscription on the wall of the former bank seemed custom-ordered: “Waste neither time nor money, but make the best use of both. Without industry and frugality, nothing will do, and with them everything.” The dinner was hosted by Hewlett-Packard, Intel and Microsoft.