Sheldon M. Gordon, creator of the extraordinarily productive Forum Shops at Caesars in Las Vegas, continues to live on the edge. 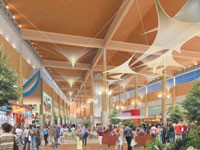 NEW YORK — Sheldon M. Gordon, creator of the extraordinarily productive Forum Shops at Caesars in Las Vegas and other breakthrough retail developments over the past four decades, continues to live on the edge, personally and professionally.

“I never wanted to be the biggest. I always wanted to be the most interesting,” Gordon, now in his mid-70s, said in an interview by cell phone from his 160-foot yacht off the coast of Majorca, as he continued on a yearlong world cruise with his family that included stops in Hong Kong, Oslo and Barcelona.

“I will tell you that I’m not much good at building malls with department stores on a flat piece of farmland.”

Yet he is good at coming up with something different.

In the Gordon pipeline is the Epicenter Collection, a 200,000-square-foot setting for online and catalogue companies — possibly L.L. Bean, Hold Everything and Red Envelope — to have show rooms where shoppers order products by handheld “buy-pods.” Epicenter could make its debut in the Polaris Fashion Place in Columbus, Ohio, but other locations are being negotiated and no leases have been signed yet. Epicenter represents Gordon’s answer to filling space in malls left behind by shuttered department stores.

“It’s absolutely not competitive” to other retailers in the mall, he said. “We are creating a whole different type of retailing. It will bring people to the mall who otherwise shop electronically and typically don’t visit malls. In a sense, you are walking through the Web, or you are in a living catalogue. You will see people there answering questions intelligently, instead of stocking shelves, sweeping floors or swiping cards through registers.”

With Epicenter, “we are not in the retail business. We don’t own one [stock-keeping unit] of merchandise. We take a large piece of real estate, and sublease to special types of tenants. We are purely in the real estate business.”

Gordon also is developing Lac Mirabel, a 1.9 million-square-foot project with no department stores, just specialty units; a 100,000-square-foot spa; a 140,000-square-foot aquarium, and a marina. Located 30 minutes north of Montreal and expected to open in 2007, Gordon said it will be the first environmentally friendly shopping center in North America “where we try to create as much energy as we can without using fossil fuels,” including creating a 121-acre lake for cooling purposes.

The Pier at Caesars, scheduled to open next spring, is intended to invigorate Atlantic City’s boardwalk with a higher grade of retail and restaurants. Again, he’s marrying gaming to stores, food and entertainment, similar to the approach he took in Vegas, when he launched Forum Shops at Caesars in 1992. The Pier is connected to Caesars Atlantic City by a skybridge, and will house brands such as Gucci, Hugo Boss, Louis Vuitton, Armani A|X, Bebe and Burberry.

“Most developers have a fairly simple format,” said Allen Questrom, former chairman and chief executive officer of J.C. Penney. “But Sheldon is one of the few creative real estate developers. He’s put centers in places where no one else could figure out how to do it. He’s a real producer.”

Other retailers and real estate executives describe Gordon as focused on innovation and ideas, more so than details, and as a classic entrepreneur who has always been able to find the capital to develop unusual projects. They say he’s been successful at finding creative solutions to enable a retail environment to exist in very dense locations or where there are other physical constraints.

For example, at The Pearlridge Mall in Hawaii, which opened in 1972, he was required to preserve a watercress farm on the site and his solution was to build the mall in two sections flanking the farm, and connect them by a monorail. It was the first monorail system in a mall. “It’s fun to ride across,” Gordon said. “You are overlooking Pearl Harbor.”

He also created a “merchandise bridge” over an eight-lane highway in Vallco Park in California in 1978, and at The Pier at Caesars, he’s part of a partnership developing a tram system that brings shoppers from the convention center to The Walk outlet center to the Caesars casino and to The Pier at Caesars transportation center. It’s capable of moving about 3,000 people an hour.

In 1980, Gordon defied convention by creating the Beverly Center, the first of its kind in America where retail is above the parking. The first selling floor is actually six levels up, and Gordon acknowledged that it was a hard sell to get the original anchors, Bullock’s and Broadway stores, on board. Now, Macy’s and Bloomingdale’s are in the mall.

“With the Beverly Center, Sheldon had this whole idea that a regional mall could be built on eight acres in eight vertical levels. Nobody else ever thought that way,” said Robert Taubman, chairman and ceo of Taubman Centers Inc., which has partnered with Gordon on several projects, including The Pier at Caesars. “This was way before people were thinking of vertical retail. Everything else was one or two levels and horizontal.”

The San Francisco Center, opened in 1988, was another tough sell. It’s a nine-level mall with 72,000-square-foot floor plates. Nevertheless, he was able to attract Nordstrom, which opened on the top five levels, and he installed the Western Hemisphere’s first spiral elevator to help move traffic through the project. The Nordstrom store remains one of the Seattle-based chain’s largest units at 330,000 square feet.

“Whoever wrote it in stone that department stores must have ground-floor exposure was full of bologna,” Gordon stated.

“Sheldon has spent his life being a risk taker. He has a creative passion,” added Taubman, who also owns Beverly Center, though Gordon maintains a stake in it.

“In Las Vegas, there were two catalysts,” Taubman added. “One was Steve Wynn. The other was Sheldon Gordon. Las Vegas was gambling only, but Sheldon brought an alternative. With Forum Shops, suddenly the concept of casinos and retail came together. Atlantic City is the same opportunity.”

“Sheldon has dozens of ideas in various stages of development,” said Jay Valgora, the design principal of Walker Group, the architectural and design firm that has been helping design Epicenter. But with each project, “Sheldon wants it to be something brand new, with a human quality, too. He’s restless. He’s a great ideas guy. He loves the game, and he’s not ready to retire.”

However, Gordon is getting increasingly interested in outside activities, such as politics and supporting moderate politicians in Congress. He’s also active in helping charities, such as the Boys & Girls Club of Greenwich, Conn., where his company is based.

And these days, he’s obviously feeling more comfortable about letting his sons run the business while he globetrots and spends more time with his family. He’s on his second marriage, has four children, including two who are adopted, and five grandchildren.

Still, he insists he still wants to be the ideas man.

“I thought I would have to leave the boat every month to run the office, but there has not been a need for that,” Gordon said. “I did come back for a month around last Christmas, and again two weeks at the end of May. But really, I have only come back six weeks out of the last 10 months. My two older sons have really taken hold.” Scott [president of Gordon Group Holdings] runs the shopping center division, and Craig handles special projects, such as Epicenter, and It’s Sugar, a candy store venture.

“I don’t have to be there on a day-to-day basis. I continue to create ideas and let them execute. But we are busier today and more creative than we’ve ever been.”

Asked how big the company is, he replied: “Right now, we are in the process of developing over $1 billion worth of properties, that are primarily owned by Gordon family members.”

For example, his wife owns 70 percent of The Pier at Caesars; Taubman has 30 percent. Every project is owned by an individual or by other companies that might invest with Gordon in the project. About a dozen projects are in the works, including several condominiums in New York City.

Gordon said he has been doing business with Taubman Cos. since 1959, and was an ally in the hostile Simon-Westfield takeover attempt of Taubman, in which Gordon ended up with a major block of Taubman stock. Recently, the two formed a joint venture that will pursue casino-based deals in Singapore and other locations around the world.

Not everything Gordon has touched has turned to gold, though. With the Battersee project in London, the plan was to convert a former power plant into a retail complex, but Gordon was removed from the development, reportedly due to creative differences with the owner.

Also, he’s got a mixed record on partnerships, though with Taubman, it’s been smooth for decades. Gordon is in a lawsuit against Simon Properties over the Forum Shops at Caesars. The two were partners, but Simon bought out Gordon’s position and Gordon has been disputing his compensation. “I filed a lawsuit over a year ago accusing Simon of some not-so-pleasant things,” Gordon said.

“My big problem has been my partners, primarily. I think I am a very good partner, but I’ve been unfortunate sometimes, other than with the Taubmans.”

His career in development spans four decades, but he started in finance, as a runner on the Chicago Board of Trade when he was 15 and later entered international trade at Bear Stearns. In 1954, he moved to San Francisco, where he worked for Milton Myer, a real estate leasing and development firm, and rose to manager of the commercial department.

He later formed a partnership with E. Phillip Lyon, and developed his first center, The Kahala Mall, which became Hawaii’s first enclosed mall. “We tore most of it down and rebuilt it, enclosed it and retenanted. I remember I didn’t have 5 cents at the time, but I loved doing it. I was the one who pushed everyone to do it.” The partnership lasted for 18 years until Lyon retired in 1983 and Gordon formed his own company.

Asked what his favorite mall is, other than any of his own, he said: “I like Park Meadows in Colorado, mainly because it is very indigenous to Colorado, with a lot of stone and wood and other indigenous materials. It gave me the idea of doing this green mall in Montreal.”

But he also gets inspired by smaller projects, including Fred Hayman’s stores that feature offbeat touches such as a billiards table and a butler. “I love things like that. I love new, fresh ideas. Break the mold and things have a way of working out the best. That’s been my life story,” Gordon said.

“When things can look totally dire, and people say you can’t do it or it’s never been done, I say break the mold. I have tried to do that over and over again.”