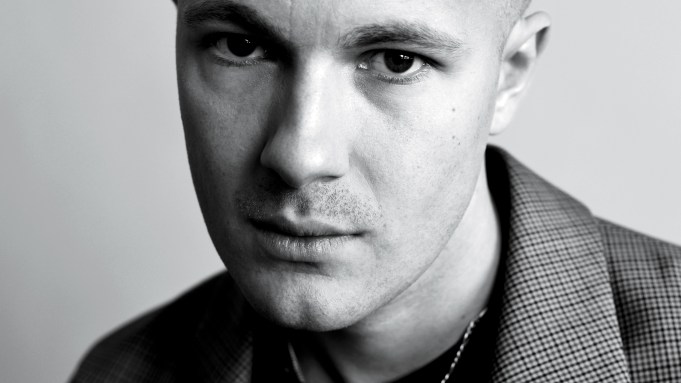 LONDON — Russia’s Gosha Rubchinskiy and all-American Levi’s have forged an alliance, and the result is a capsule collection that will make its debut Wednesday at Pitti Uomo, WWD has learned.

Rubchinskiy, the photographer and filmmaker who regularly shows his fashion collections on the Paris catwalk, is the guest designer at Pitti in Florence, which began Tuesday and runs through Saturday.

The designer has riffed on two Levi’s staples — the Type III Trucker jacket and the 505 jeans. The prototypes, created at the Levi’s Eureka Lab in California, will be unveiled during Rubchinskiy’s spring 2017 show at Pitti.

Both the jeans and the jacket have been done in eight-wale corduroy, in four colorways: Black, white, fluorescent yellow and bright red. Each piece features Cyrillic script embroidery and a black Gosha x Levi’s label developed for the collaboration.

The script spells “Gosha” in Russian on the chest of the trucker jacket and on the left back pocket of the jeans. The label, meanwhile, features white lettering on a black background.

Although Rubchinskiy could not be reached for comment, he told WWD in March that the spring collection would mark a change in direction for his streetwear brand that launched in 2008 and partnered with Comme des Garçons in 2012. He is also planning a photography book and video to go with it.

Rubchinskiy had long been on the radar of the Levi’s creative team, and they finally reached out to the multitasking, low-key Russian directly — via Instagram — proposing a joint project.

The Russian responded with a thumbs-up emoji.

“We are fashion designers, we look at the shows and we’ve been following him since 2007 or 2008. A lot of us have been following him for a long time and maybe not really taking it too seriously — until the last couple of years,” said Jonathan Cheung, Levi’s senior vice president, global head of design, in an interview.

Cheung said that during the last few years, he and the team had really begun studying Rubchinskiy’s work and noted that he’d photographed a collaboration Levi’s had done with Supreme. “So we felt there was almost like one degree of separation at that point,” added Cheung, who before joining Levi’s in 2009 had worked for Armani Jeans and with Franco Moschino on that brand in Milan.

Cheung said that the creative process took place mostly via e-mail “and the odd direct message over Instagram” and said it could not have gone more smoothly. “Gosha,” he said, “is a man who knows exactly what he wants.”

Rubchinskiy chose the Levi’s pieces that he wanted to work with, the color palette and specified corduroy as the material. “We had a back-and-forth about the labeling, but it worked out perfectly: It’s very, very simple joint labeling.” Prices are in line with the designer’s collection.

Cheung added that virtual designing has become something of a norm. “A lot of our stuff, even for Virgil [Abloh] and Off-White, is done not just by conventional email communication and phones. It’s things like text messages and Instagram messages. It’s very different.”

He was referring to the partnership between Off-White and Levi’s Made & Crafted for fall, which was previewed during Off White’s Paris runway presentation.

Cheung pointed out that the Gosha collaboration coincides with the 50th anniversary of both the 505 jeans, which feature on the cover of The Rolling Stones’ Sticky Fingers album and The Ramones one, too. Spring 2017 also marks the big 5-0 for the trucker jacket.

This latest project with Rubchinskiy is part of Levi’s efforts to re-establish itself at the center of youth culture in a market dominated by fast fashion and multiple denim labels. Levi’s also has to grapple with the issue of how young people today wear the same denim brand their parents and grandparents embraced as rebellious youths.

Levi’s is marketing itself as an authentic, timeless brand, one that people can make their own, and the collaborations with hip, niche names is a part of that. (Levi’s also has an ongoing collaboration with Google for its commuter series of clothing).

“What’s interesting about Gosha and Off-White is that they’ve taken that street level and put it on the Paris or London catwalks,” said Cheung. “What they’ve done that’s possibly disruptive or interesting is elevate the showcase and make it far more influential. You know, street influences catwalks, and people that can wear designer clothing play high-low. I don’t think anything would make a Gucci bomber jacket look better than a pair of Levi’s 501s.”

He added that Levi’s draws so much from the collaborations — and the benefits can often be more philosophical than commercial.

“We are trying to understand people, and get insights into the way trends are going.” said Cheung. “With Gosha and Off-White it definitely has something to do with almost a democratization of fashion from the street up.”

He said that creating an environment for creativity to flourish is part of the mission.

“Creativity is like the Hadron Collider. If you push particles together they will create energy. When we interact with people that are outside our world, we hope energy will be sparked off and we can use it to make things better. It’s about the discovery process and creative insights we can discover by just bumping our brains together.”

As for the evolution of the collaborations with Off-White and Rubchinskiy, he said they’re open-ended, and it’s hard to speculate. “At the moment, there’s no stop date,” he said.

In the meantime, his team will continue to monitor trends micro and macro, from fashion and retail to food, holidays and tech.

“It’s in our spinal cords to take an interest in stuff like that. When you take it past the superficial level of what’s on the street or in a store or on the catwalk you are looking at the changes in peoples’ values and expectations.”