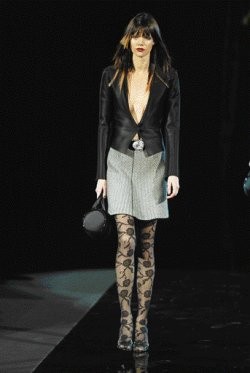 Giorgio Armani: Call him Gentle Giorgio…because the fall collection Giorgio Armani showed on Monday was a soft, easy affair, minus the celebrity bells and whistles that so often reverberate at his shows. Rather than his typical high-wattage lineup that fills an entire front-row section, this time the star power was delivered lightly, as Kevin Kline and Rebecca Romijn-Stamos kept relative low profiles, at least until she hit the runway to close the show.

If the notion of a celebrity stroll seems odd to audience veterans, Romijn-Stamos’ made a certain point, done up as she was in frothy curls atop her Armani dazzle, because this was one of the most feminine collections the designer has ever done. If his program notes overstated reality when claiming that here, “fashion assumes a new form and shape,” Armani did indeed come down firmly on the side of graceful, pretty clothes. As at Emporio Armani, he focused on the legs, with lots of shorts and his version of mini, a length that by current standards is quite polite — too short for most of his clients to wear, but proper enough to ward off eye rolling should they catch the fashion show on cable. And if some overwrought patterned hose got a tad distracting, the clothes still looked good. Armani went to town with short, shapely jackets in everything from lace to tweeds, and put them with those runway-only shorts and countless real-life skirts.

In Armani’s hands, of course, feminine would never cross the line over to prissy. Thus, he worked mostly in black, white and grays. And he kept patterns strong, not only in graphic stripes, but in white-on-black florals that took on a bravura when enlarged and abstracted.

At night, Armani steered clear of the lavishness that is his hallmark. Instead, he maintained his short motif, focusing on lovely, sturdy laces in dresses and separates that looked almost casual. And he worked in an au courant “Chicago” shimmy dress or two. But then, no one seizes the Hollywood moment like Armani.

Fendi: What do Barbarella and Joan of Arc have in common? Each was instructed by a higher being to save the world as she knew it, and each got suited in some pretty nifty togs while on assignment. What more would Karl Lagerfeld need to link two such icons of girlish passion and style?

Lagerfeld called the Fendi collection he showed on Monday “Neo-Renaissance.” He said after the show that he had been inspired by armor, “but made weightless” for modernity, and by the rich colors of Titian paintings with shine, shine, shine. Nevertheless, the collection had at least one bi-color, thigh-high boot planted firmly in that cartoon world of Sixties’ Space Age — a connection Lagerfeld managed to make minus the Hanna-Barbera effect. At least most of the time.

As for the sainted Joan — Renaissance, Middle Ages —potato, potahto! This is fashion, not a history test. Lagerfeld translated armor motifs into strong, graceful graphics that he wove throughout the collection, distinguishing his take on the omnipresent Sixties’ theme. His dresses — schoolgirl-crisp shapes cut lean and short, detailed with those armor-like insets and streeted-up with bold, colorful zippers. But only a schoolgirl with a naughty streak would dare step out in those dangerous boots. Lagerfeld loves them with almost everything; so much, in fact, that they inspired a whole new take on the three-piece suit: a jacket, HotPants and boots, all in nude leather, matched to the model’s skin tone. More often, he went for color over monotone, his girls all aglow in metallic HotPants or high-gloss satin leggings that gave a nod to the tacky side of the Eighties.

But the shine didn’t stop there, as Lagerfeld metallicized shearlings and furs to dazzling effect. Some pieces heralded a return to voluptuous proportions in width if not length, while he kept others sleek and sportif, even including a quilted parka. And once again, he played with those Fendi special effects, working the fur in all sorts of ways. Some resembled velvet, some feathers, some seemed to sprout wild tufts of fur, a process that had Karl boasting backstage. He described them as “furs made like implants — what men get done with their hair — except they’re using mink.” Cosmetic surgery on a coat — leave it to Lagerfeld.

Gianfranco Ferré: You’ve got to hand it to the man. He’s been at it for 24 years, and Gianfranco Ferré is still tinkering with his fashion formula like a St. Martin’s senior. Each season, his never-ending experiment takes the fashionable Ferré woman to new places, always maintaining — and maximizing — a dramatic edge. And while Ferré himself may be the serious, solemn sort, the drastic daring of his creations — perhaps unintentionally — stirs up fun.

The best looks in Ferré’s fall collection were built to suit the most elegant motorcycle mama the world may never have seen. Classic motorcycle jackets zipped this way and that at the neck to create a regal portrait collar of the sort Queen Elizabeth I might have favored had she ever hit the road astride a hog. Of course, these also came intensified, cut in gold leather or croc and decorated with swags of chain and a smattering of brooches to add a little bit of pomp. Vrrrrooom.

The rest of the collection ventured far and wide, covering ground from Ferré’s chic classics, which always boast a slightly sinister flair, to fresh-looking pieces that took inspiration from, if not the street, then the dance floor. The designer has been studying young people lately, it seems. He cut pants baggy and planted a couple of big back pockets on a satin ballskirt. While his striving doesn’t always pay off, Ferré never gives up, and he never gives in to complacency.