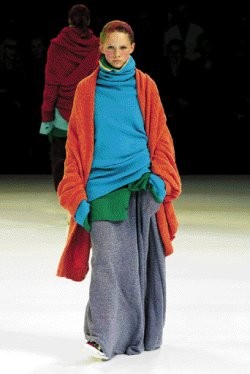 Y’s: If anyone can make sweaters that slump and slouch, falling into elephantine folds, look elegant, it’s Yohji Yamamoto. Earlier in the week, Milan hit its millionth mini mark, but Yamamoto’s Y’s collection provided an extreme counterpoint. It was full of huge, piled-on knits that wrapped and bulged, leaving the body buried somewhere underneath, smothered in softness, with only the gauziest looks granting a fleeting glimpse of bare skin.

Except for a near-hysterical outburst of kaleidoscopic color — aqua! orange! magenta! — Yamamoto worked these eccentric, luxe looks in black, black and more black. A black cardigan drooped almost to the knee in gentle rolls, while a matching skirt fell just shy of the ankle — and legwarmers took over from there.

Gravity dragged everything down, but Yamamoto also hinted at gravity of a different sort. Graphic jackets, dip-dyed to run from fuchsia to black with a sliver of jagged white in between, pointed to a bright future. But as models moved along as slow as turtles, trailing the braided strands of fringe that sprouted from an unraveled jacket sleeve or skirt hem, a woman’s voice enumerated her objections to war over the sound system. “I have to be honest with you, I hate war in all its forms,” she went on, “physical, sociological, psychological….” Even without the public announcement, it was clear that Yamamoto’s wrapping knits offered a certain kind of protection. His plush swaddling clothes provide a psychological safety net, a cozy cocoon where one could weather any storm.

Junya Watanabe: In her genteel tattered finery, Junya Watanabe’s luxe lady looks like she’s found herself gliding along the sorry slope of an economic downturn. But, while she’s in decline, she’s hardly been humbled. Watanabe’s plucky victim of circumstance is still as chic as they come, wearing handsomely tailored jackets, circle skirts and heavy wool dresses, all in houndstooth, herringbone or plaid and delicately frayed at the edges. Her noble wardrobe not only survived the aging process, it has improved with age, taking on a sweet melancholy.

Watanabe has done the distressed-damsel thing before, but rarely with the tenderness he showed this time around. A simple silver chain served as a belt, wrapping around a boucle skirt and piercing through it, and even the most pauvre looks were perked up with bows perched here and there. The demure polish of it all hinted at clothes that might have been shown chez Dior or Chanel once upon a time.

While a message of faded glory was the sole focus of the show — besides some peculiar picture hats sculpted out of overgrown wigs — the best of Watanabe’s ravaged riches suggested, not violence or disaster, but entropy. A bas-relief bow, for example, sunk into the bodice of a gray wool dress as if it had simply deflated over time. Then the models themselves disappeared, engulfed in Rapunzel-without-a-brush tendrils.

It all made for quite a glorious descent. Oh, how the mighty fall.

Martin Margiela: Pretty isn’t the adjective one usually associates with Martin Margiela, the Belgian designer known for his highbrow deconstruction and arty austerity. But that description fit the fine collection he delivered for fall. Perhaps his design duties at Hermès have influenced his hand, softening it and pushing it in a chicer direction. And that’s a welcome development, for, over the past couple of years — despite all of their intellectual integrity — Margiela’s clothes had become a bit of a downer, just when fashion demanded more festivity and fun.

After Margiela’s white-smocked helpers threw confetti over the runway, smiling models strolled out, sandwiched between two men wearing fluorescent light boxes strapped on their backs. It was a sweet touch. The clothes had a quiet sophistication to them, with belted tailored jackets and vests spiced up with the lining puckering out around the lapels like a scarf. Margiela worked a smoking theme around short white tuxedo pants and sleeveless shawl-collared jackets. Colors remained circumscribed in a pale palette of cream, black, beige and yellow, with asymmetrically detailed knits adding a soft, feminine touch. Suede vests, fur coats and cream embroidered skirts were also finished and graceful. That’s not to say that the designer abandoned his experimental shtick entirely. Only this time, the vests or jackets spliced together from jacket sleeves had polish —unlike the gruff, sad stuff of the past.

Rick Owens: Making his debut in the City of Light, Los Angeles-based Rick Owens had a point to prove: that his Goth sensibility could hold its own in fashion’s most creative hub. Did he succeed? Well, he made a credible start. In many ways, Owens’ distressed leather jackets, boiled wool pants, wrap-around tops and asymmetric flurries strongly resembled a certain Belgian designer’s very personal style. But Owens’ work is honorable. His jackets, cut short in the back and long in the front, or a duffel number with stuffing spilling out from the lapel, were interesting variations on tough, industrial chic.

Owens also has his own voice when it comes to draping and wrapping. Skirts with twisting silhouettes and high-collar jackets were fine taken on their own. But the designer, now facing stiffer competition, will have to notch up the energy if he is to make a stronger impression here. Perhaps in his new mission of breathing life into the dusty fur house of Revillon — his first collection is expected in July — he’ll manage to do just that.