An increasing number of women are founding their own companies and, according to a recent survey, the growth of these start-ups is outpacing that of firms in general. 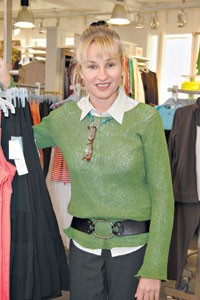 Sisters are doin’ it for themselves.

An increasing number of women are founding their own companies and, according to a recent survey, the growth of these start-ups is outpacing that of firms in general.

The Center for Women’s Business Research in Washington, said privately held firms that are at least 51 percent owned by women are growing twice as fast as the average U.S. firm, contribute $1.1 trillion in revenues to the economy and create jobs for 7.2 million Americans.

Sharon Hadary, the center’s executive director, pointed out that these businesses are getting larger and more substantial.

“Women are transforming the face of business,” said Hadary. “If we look at women moving into leadership positions in corporations, if we look at the growth of female entrepreneurs, their businesses are making an increasingly significant contribution to the economy.”

What does it take for entrepreneurs to build businesses? First is access to capital.

“We’re seeing that financial institutions are looking to make women business owners their clients; they are making them part of their portfolio,” said Hadary. “Even in the top metro areas — L.A., New York and Chicago — national banks aren’t the only ones supporting these businesses; regional and community banks are focusing on them, as well.”

Second is access to large markets. When owners are looking to spend money to obtain goods and services to grow, large corporations can supply them.

Third is access to networks. “Entrepreneurs need to have access to people with great knowledge, with expertise. New business owners need to be visible; they need to network in order meet business leaders and gain business,” said Hadary.

And last, women should open their businesses in vibrant areas of the country.

In the beauty world, names such as Andrea Jung, chairman and ceo of Avon Products, and Susan Arnold, vice chairman of Beauty and Health at Procter & Gamble (the highest-ranking woman in the company’s 169-year history), are well-known.

And in the State of the Union address Tuesday night, President Bush described Julie Aigner-Clark, founder of the Baby Einstein Co., as a talented business entrepreneur and generous social entrepreneur, saying, “Julie represents the great enterprising spirit of America.”

Said Hadary, “We are seeing the emergence of women as a vital force in our economy, in our society and in the political arena, as well.”

“Having these women leaders so visible will begin to change the tone of the conversation in this country,” said Hadary. “Women will continue to make their mark, especially in areas that are thriving economically.”