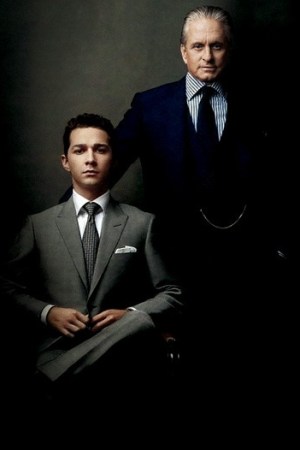 Oliver Stone directed Wall Street as a morality play, an attack on the venal corporate culture of the Eighties and an ethical lesson on the perils of profit-driven excess. But apparently not everyone saw the same movie. To Stone’s dismay, his film’s antihero Gordon Gekko—played by a suave and predatory Michael Douglas—inspired a new generation with his “greed is good” ethos to head straight to Wall Street. Many adopted the character’s style along the way. With his contrast-collar shirts in peacock colors, bold braces and tautly gelled hair, Gekko became a sartorial icon for aspiring brokers, as a certain whimsical touch became the outward expression of internal bravado: the yellow conversational tie as middle finger.

Today, on the eve of Gekko’s return in Stone’s Wall Street: Money Never Sleeps, which hits theaters in September, the financial world is a decidedly different place. Banking is global, many of the industry’s marquee institutions have vanished and its groaning failures make the sins of the first film—insider trading and corporate raiding—seem quaint. Men’s style has changed, too. The financial world has become less colorful and more casual. Braces are passé, and the Hermès power tie has lost some of its punch.

The job of updating Wall Street style for the new film fell to veteran costume designer Ellen Mirojnick, who also dressed the characters in the original movie. Gekko’s Eighties dandy, a look she says she based on a mix of Pat Riley and the Duke of Windsor, has given way to an image that is darker, sleeker and more urbane. “The suits are gray and dark blue, and they hug the body. These guys are sharks—I wanted them to look slick,” Mirojnick says. “Everyone on Wall Street does bespoke, so we did bespoke as well.”