CSM graduate Patrick McDowell has been eyed by Anna Wintour and Elite for his sustainable designs, only producing one collection a year.

Upcycling materials is nothing new for fashion designers, but there is something to be noted about the way sustainably minded designer Patrick McDowell views (and speaks about) the industry that is fresh.

The 24-year-old Central Saint Martins grad bashes the wholesale model in favor of his mental health and partners instead with the likes of Depop (running an upcycling workshop in Selfridges), Higher Studio (offering his garments for rent) and brands such as Swarovski and Burberry (upcycling materials).

McDowell shares his views on wholesale, fashion shows and how he plans to grow his business and personal brand with new partnerships.

WWD: Finally, this appetite for sustainability is broadening.

Patrick McDowell: There’s a wider appetite for people to be nice and to work together and help each other — and the creativity actually improves that way, too. My thesis was based on creative learning and removing the idea that creative learning is about art and design but applying that thinking to any industry or any subject or any person at any age.

WWD: Where do you see yourself building these strategic partnerships, and how do you want to work with brands?

P.M.: It’s not about working with brands that are like super sustainable necessarily, but it’s about the education that I can bring to a brand through, I’m hoping, five or less annual partnerships with different companies. It allows me to have financial stability, which is also part of sustainability.

WWD: What’s your lineup so far? What advantages are there in partnering?

P.M.: Swarovski, possibly Ultra Fabrics and hopefully Converse and Burberry. It allows me to share ideas with different people and learn from them, too, and maybe use old fabric or old material from them but also give them an avenue to filter their brand name through my authenticity as a designer.

On the very basic level, mass-producing clothes has absolutely no interest to me anyway. I’m not doing it solely to be sustainable, I also think it’s really boring. And also because it’s quite old-fashioned. I find it really ironic that the word “old-fashioned” has the word “fashion” in it.

It’s like, you’re a designer — why would you want to do something that’s already been done?

WWD: To your point on “old-fashioned” — fashion as an industry is always obsessed with the newness. Where do you see these new models — like rental — fitting in? And can you talk about your Depop partnership?

P.M.: One of my last partnerships was with Depop, which is an app platform popular with younger generations which is interesting because if you think about how fashion wholesale works basically the only winner in that is the department store because they pay late, they take a huge commission, they stretch you out as a designer and push you down on your markup or keep theirs.

Also, though we’re now seeing the fall of them — which has been in a lot of fashion predictions — that department store sales were dropping off and secondhand is growing, set to outtake [department stores] in the next 10 years or so, and rental is a new thing that’s going to appear on the scale.

WWD: Both subsets of this circular economy model.

P.M.: I just think there are so many interesting things to do, that I wouldn’t have time to do if I was running into this wholesale, seasonal fashion industry. What I’m doing is showing one collection a year. I showed it in Helsinki first, then London, then Venice, then Budapest. It’s the same collection, just showing it in different ways. It doesn’t lose its appeal at all, there are still people taking pictures of it. That was a 20-look collection; it’s small and it lasts for a year, marketing-wise.

WWD: What inspired this year’s collection?

P.M.: When I was interning at Burberry, I would speak to my friends interning at Louis Vuitton and everywhere else and we all had the same images from Pinterest because of the algorithms. If every fashion company in the world starts to click the same image, then everything starts to move in the same direction.

I wanted to design only with pictures that I knew no one else had, which was my family pictures.

WWD: Are you already working on your next one?

P.M.: Yes. So my first one was on my dad, the second one was on my mom and my sisters and the third one is going to be on me. Me as a kid, based around Superman and Catholic priests.

WWD: What does it mean to have an endorsement from Anna Wintour for the Stella McCartney “Today for Tomorrow” award?

P.M.: Well, I think it’s great to see someone like her literally vocally supporting what I’m doing, or any designer that’s good for. It’s been two weeks since it’s happened, but I already noticed that I have that much more validation as a designer.

The day it came out — because I have statistics on my account because it’s a business page — 8,500 people looked at my profile.

This kind of stuff doesn’t happen to a 24-year-old, one year-graduated Central Saint Martins student. This should be a wake-up call to students studying at Saint Martins now if you do this sustainability stuff right, people are going to start looking.

WWD: Where do you stand on leather?

P.M.: I’ve taken the decision to not use anything that’s a skin now. I have used waste leather before. I do still think that fundamentally the best way to be sustainable is to use stuff that already exists.

With fur, I just personally don’t like the way it looks either. I wouldn’t use it even if it was eco.

WWD: What other materials would you consider, maybe biomaterials?

P.M. These T-shirts are made from Earthpositive organic cotton. It means that the ground that the crops are in are rotated more, it’s grown in a way that it doesn’t take away all the topsoil, which normal organic cotton does. And the factory that makes them is in India, but it’s powered by wind and then they pay everyone a fair wage. It’s printed in England with nontoxic dyes and has this QR code that shows you the traceability. It’s a company called Rapanui.

WWD: How did you come across a wind-powered factory in India — you’re doing your research?

P.M.: You know Katharine Hamnett? Beginning in the early Eighties, fashion designers were traditionally invited to a lunch at Downing Street at fashion week. Hamnett turns up at Downing Street wearing one of her slogan T-shirts confronting then Prime Minister Margaret Thatcher with a shirt that read “58-percent Don’t Want Pershing.” She was doing them before anyone else was really doing them.

WWD: So you connected with Katharine? How else do you stay connected?

P.M.: Well, because she’s transparent on her web site, but I do know her also. It’s not going to take any more money from her. And they’re nice T-shirts.

There’s this WhatsApp group that Phoebe English started, she’s a London designer who really pushed into sustainability, called “Fashion on Earth,” and there are loads of designers in it that are interested in it, in London and outside.

I needed organic cotton joggers for this charity thing I did, and I posted about it and got a response from Graeme Raeburn from Christopher Raeburn — literally a link to the place to buy them from.

WWD: What else, aside from not doing wholesale, do you have a firm stance on?

WWD: How can young designers avoid that burnout?

P.M.: Don’t do wholesale — and don’t be seasonal, but also if you don’t do wholesale you don’t need to be seasonal. It all stems from: it’s too quick, it’s too much for anyone. I’m not surprised that people can’t move their businesses around because they’ve got no time to do what they’re trying to do now, so how can they think about something else?

WWD: Are you an advocate for “slow fashion,” if you’d even call it that?

P.M.: I don’t know, but I think the problem with that is it has connotations with being lazy. I guess it’s slow, but I have the time to do things in my year because it’s not constantly making new stuff. I think it’s quite empowering to say: “No, this is it. This is it. That’s all it’s going to be for a year.”

WWD: What do you see in the next year, or the next five years?

And then recently, signing with Elite as part of their special board of Via Elite, a division of Elite Model Management. It’s like a super interesting revelation. They said to me, “Do you want to come in for a meeting?” And I was jokingly like, “Yeah, to be a model?”

I think they’ve realized I don’t like anyone wearing my clothes who don’t follow what I’m doing. And you can tell when people don’t get it because they don’t treat the clothes very well.

I’m noticing this now with designers I’m working with, they need people to educate models that are working for them and take stands on issues important to them. Obviously, they’re part of the puzzle, too. But then also on top of that, Elite wants to represent me as kind of like a voice for sustainability.

WWD: Is there a front-runner in sustainable fashion shows?

P.M.: I’m biased to say Helsinki because I had first showed there. Especially for the one in 2020, which I’m going to be a part of I’d never heard of anything like it. Ten days before the show starts, all the designers are going to go there to work together in a collaborative studio to produce pieces which you can then add into your show, if you want — but you don’t have to. The point is we’re all going to be there together, designing together and making stuff out of old fabric.

This year they’ve really scaled back how many designers they’re having; they’ve been a lot more selective. They only show people who are doing something good.

There’s also this weird impression that you can only show at one place. I’m also going to show at London, with the British Fashion Council in September, and if Moscow wants me to show there, I’ll show there. It’s not a one trick pony. 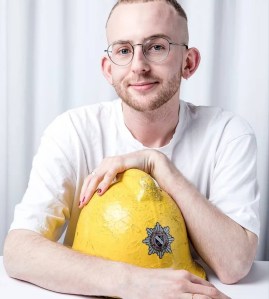 Katharine Hamnett Climbs on Her Soapbox at Liberty