For fall, designers are offering up elements of Little Edie Beale’s eccentric style, including distinctive prints and layering pieces. 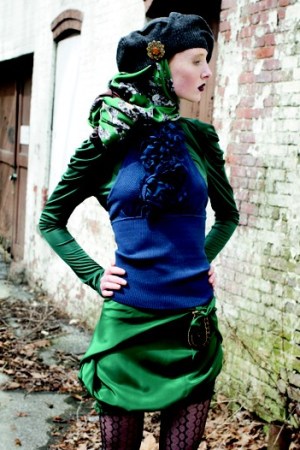 In HBO’s upcoming “Grey Gardens” film, which debuts on April 18, any initial surprise about how Drew Barrymore’s California clip has melted into a Long Island-cum-New England drawl disappears. You lose sight of the fact that Barrymore and Jessica Lange (as Little Edie and Big Edie Beale) packed on the pounds with the help of pads and prosthetics — is that or isn’t it Lange’s actual dangling underarm fat? (It isn’t; those prosthetics are good.) Even the faux Grey Gardens house itself, located not in East Hampton but Toronto, is practically a pitch-perfect rendition of the original’s grubby feline-filled squalor — littered with cat-food cans with period-correct labels. And one of the most integral parts to remaking the famed 1973 documentary by Albert and David Maysles is the fabulous fashion. For this, audiences have Brooklyn-based costume designer Catherine Marie Thomas to thank.

“This has been so different from my other jobs,” says Chicago native Thomas, whose other credits include “Kill Bill,” “27 Dresses” and “A Prairie Home Companion.” “My job was really about helping those two ladies actually feel like the characters. The other movies were more an external, aesthetic thing.” And, indeed, Uma Thurman without her bumblebee yellow flight suit would still have been a kick-ass karate killer, but Barrymore-as-Little Edie without the head wraps and eccentric, deconstructed style? You can’t separate the character from her look. To a certain set of “Grey Gardens” devotees, Little Edie is as much a fashion icon as her first cousin Jackie Kennedy.

In fact, the biggest challenge in tackling the documentary was “getting over the expectations,” Thomas notes, “not just of ourselves but the people who love ‘Grey Gardens’ and the fashion industry. You’re recreating iconic people. [The style] has been covered so many times and in so many different ways by designers.” There’s a twist to the HBO edition, however — like Scott Frankel’s 2006 musical of the same name, the movie also looks to the decades before the Maysles brothers began filming in 1973. Director Michael Sucsy cuts the later scenes, often lifted straight from the documentary, with moments from the Thirties, Forties and Fifties to explain how the Beales ended up a mother-daughter duo living in ragtag isolation. And at the privileged start, they’re utterly glamorous.

“We looked at Nancy Cunard and Cecil Beaton photographs from that era,” says Thomas, adding that she had full access to Sucsy’s enormous trove of photographs of the Beales, compiled from years of research. One snapshot in particular caught her eye. “Little Edie was wearing a silk charmeuse gown, with a zipper up the front and a hoodie,” Thomas recalls. “We thought, what an amazing metaphor for her because the hooded gown and the zipper were incredibly progressive for the Thirties. This woman was so ahead of her time even when she was 18.” Barrymore wears a replica of that very dress in a party scene at Grey Gardens, when she’s soft-shoeing it with Lange, who, as the elder Beale, is decked out in a dazzling persimmon velvet robe over a palazzo-pant onesie.

Robes are, in fact, what Lange wears in the majority of the movie. She spends the early years clad in gorgeous chinoiserie-embroidered kimonos. “Jessica had more of a bohemian feel,” says Thomas. “Everything was a little looser, a little more flowy.” And those outfits made for an easy — and symbolic — transition to the Seventies period when Big Edie is mostly bedridden and dressed in bathrobes. Lange, Thomas adds, “abandoned all the confining undergarments of the period because Big Edie was so free.”

Though many of the costumes, culled from various vintage shops like New York Vintage and Stella Dallas in Brooklyn, are merely Grey Gardens-inspired, a handful of looks are virtual knock-offs from the documentary. These include the black sweater and panty hose ensemble Little Edie sports while dancing to a peppy Virginia Military Institute march with an American flag in hand, and the brown skirt she wears upside down while in the garden. Thomas even had brooches and a simple blue sweater vest recreated for the film. And then there’s Little Edie’s floral brown and yellow maillot — Barrymore’s is the same print as the original. “We were lucky that a fan of ‘Grey Gardens’ had collected that bathing suit,” Thomas says.

Thomas also paid plenty of attention to Little Edie’s wacky DIY sensibility. Case in point: the crochet skirt Barrymore wears in a later scene, which eagle-eyed viewers will notice first appears in the movie as a tablecloth. “She had an incredible, unique way of looking at things,” says Thomas. “It’s genius how she knew how to manipulate things.” Little Edie had a particular obsession with working everything from towels to that blue sweater vest as headdresses to hide her hair loss. “They were her own form of expression, like putting on a wig everyday.”

Those head wraps provided some of the toughest dressing moments. “Every time you put a scarf on Drew’s head,” Thomas says, “it would affect the prosthetics. She had, like, 30 different pieces on her face and anytime you wrapped anything on her head, it would either pull them back or crunch them forward so you’d end up with a weird Cro-Magnum brow.”

That wasn’t the only difficult part of the shoot for Thomas. Like the Maysles brothers who wore flea collars around their ankles while filming the documentary — Sucsy comically depicts this on film — she had her own occupational hazards. “I was on nasal steroids, my eyes were breaking out,” says Thomas. “I wouldn’t trade it for anything else, but it was a nightmare.” The costume designer, it turns out, is allergic to cats.