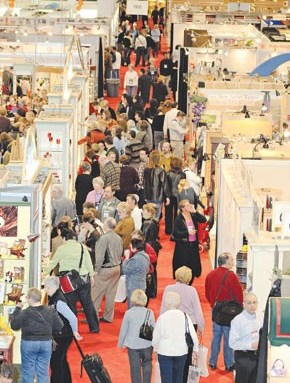 MONTREAL — If show attendance and waiting lists are any indication, the Canadian economy shows no signs of slowing down.

A growing waiting list has been a concern the past few years for Alice Chee of the Mode Accessories Show, which is celebrating its 20th anniversary this year. The upcoming edition, to be held Aug. 12 to 14 at Toronto’s Doubletree International Plaza Hotel, is limited to 230 exhibitors due to a lack of space.

“All the major shows seem to be happening in the same locations at the same time, so I have nowhere to go,” she said. “We did a survey in January and 75.7 percent of the 5,000 buyers attending our show also attend the CGTA [Canadian Gift and Tableware Association] gift show, which is held at the same time. It’s one of the largest shows in North America, and they take up both the International Plaza and International Center [in Toronto].”

As a result, Chee still has a waiting list almost as long as her current roster of exhibitors and can’t do anything to accommodate them.

The January survey also revealed that 74.6 percent of Mode buyers, many of them nonfashion retailers, planned to increase accessories in their product mix, said Chee. She pointed to a recent quote in WWD by Barbara Atkins, fashion director of Holt Renfrew, who said, “Accessories are the new wardrobe; ready-to-wear is the new accessory.”

With more than 1 million square feet of exhibition space and 1,100 exhibitors, the CGTA show — which takes place Aug. 12 to 15 — is the largest trade show in Canada. Like Mode Accessories, CGTA has a waiting list of more than 300 applicants, some of whom will be accommodated at the January 2008 show, when the Congress Center expands its facilities by 30 percent.

“We’re expecting about 23,000 buyers in August, approximately 20 percent of them from the U.S. and Europe,” said show manager Karen Bassels. “We compete with Mode Accessories, because many of our exhibitors carry fashion accessories. But we’re friends more than competitors, as our venues are close to each other and many buyers shop both shows.”

In a response to exhibitors and buyers, FashionNorth, Canada’s only national apparel trade show, will combine its men’s wear and women’s wear shows Aug. 17 to 19 at the International Center, next door to Toronto’s Pearson International Airport.

Show organizer Meteor Show Productions would like to do the same for its fall-winter edition in February, but can’t book the required space.

“Most of our exhibitors carry both men’s and women’s, so they were really pushing for a combined show,” said Ralph Weil of MSP. “We could book the large hall in August, but it’s not available in February, so we’ll be back to two separate shows next winter.”

The large hall is 120,000 square feet, compared with 80,000 square feet for the hall used in the separate shows. FashionNorth is on the waiting list for the bigger venue and would like to combine the two shows in February as long as it doesn’t conflict with the MAGIC Marketplace in Las Vegas.

Although it is still early to predict numbers, Weil is anticipating between 150 and 200 exhibitors in August, a 50 percent increase over the men’s wear show last year. “The trick now is to find a keynote speaker that is relevant to both buying groups,” Weil said.

The knock against MFW is that it keeps changing venues and too many shows are off-site, forcing the media to run from one part of the city to another.

“It’s true, we keep changing sites, but that’s because we keep growing,” said Chantale Durivage, co-president of Sensation Mode, which organizes MFW. “We’re not sure where we’ll be in October. And all but one designer had their shows in the main venue, and we hope that will continue.”

Durivage bristles at the suggestion MFW is a minor player compared to Toronto’s L’Oréal Fashion Week, which boasts close to 100 designers and more media coverage.

“Some Toronto designers have two pieces in their collection, which inflates the numbers. We get about 600 people at each runway show and the majority are from the media and buyers, including a record 20 buyers from the U.S. and Europe, so it’s very business-oriented. And we had over 30 million media impressions.”

LFW, taking place Oct. 15 to 20 at a not yet determined venue, seems to be growing at the expense of MFW, with the former consistently featuring more designers, attracting larger crowds and more media.

“Our attendance is very consistent,” said Robin Kay, president of the Fashion Design Council of Canada, which organizes LFW. “We’re now seeing upward of 14,000 people attending throughout the week, including 300 to 450 from the media, generating 105.5 million media impressions, all verified by Bowdens Media Group. We feature about 100 designers during the week at runway shows, private shows and off-site events.”

Kay plans to crank up a national marketing campaign in July to promote LFW to a larger audience, and said sponsors will be more involved.

LFW is also bursting at the seams and desperately needs a bigger venue.

“The Liberty Grand comfortably seats 700, but we could accommodate 1,200 people and the site isn’t big enough for that. Unfortunately there’s nothing else around that I would use, but we’ll probably move to another site that I haven’t yet decided upon,” said Kay.