Mulberry, the British accessories and ready-to-wear brand, saw profits blossom to $3.6 million for the year, propelled by sales of leather bags. 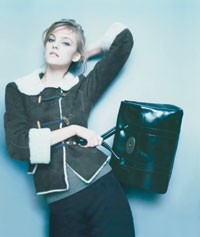 LONDON — Mulberry, the British accessories and ready-to-wear brand, is blooming.

Profits at Mulberry Group plc shot up to $3.64 million, or 2 million pounds at current exchange, from $56,420, or 31,000 pounds, for the fiscal year ended March 31, propelled by sales of its no-logo, weathered-looking leather handbags.

The spike in profits was the initial phase in a turnaround that began in 2002, when new management replaced Mulberry founder Roger Saul in an effort to stem years of losses and develop a viable growth strategy.

“It’s the first step in the right direction, and it’s very encouraging,” Lisa Montague, chief operating officer, said. “But we’re checking ourselves at every step along the way and keeping our feet on the ground. The brand name is still bigger than the actual business.”

As part of its growth strategy, Mulberry has been expanding into the U.S. and the Far East, and has been consolidating its distribution networks in Europe. The U.S. is a major focus for Mulberry now, and the company has said it would like to boost sales from 10 percent to at least 20 percent of the total during the next few years.

Last fall, Mulberry launched exclusively at Bergdorf Goodman. Since then, it has begun to sell at stores including Barneys New York, Neiman Marcus, Fred Segal, Jeffrey and Intermix. Mulberry is to start selling at Saks Fifth Avenue in the fall. Montague said the company also was looking for retail space in Manhattan, and the plan is to open a stand-alone store by spring.

In August, Mulberry’s fall ad campaign, shot by Paolo Roversi, will break in U.S. Vogue, and later in Tatler and the British editions of Vogue and Glamour.

Mulberry’s momentum is building in the current fiscal year.

Sales are split evenly between wholesale and retail channels. Europe, including the U.K., generates about 75 percent of all business, followed by North America and the Far East, each with 10 percent. The rest of the world accounts for the remaining 5 percent.

During the past year, Mulberry opened a stand-alone unit in Notting Hill, bringing the total number of U.K. stores to five. Mulberry also opened stores at Heathrow Airport’s terminal one and terminal four, and concessions at the U.K. department store House of Fraser. The brand has nine doors in continental Europe and Scandinavia.

In the Far East, the company opened stand-alone stores in Hong Kong, Bangkok and Kuala Lumpur in partnership with Club 21, which belongs to Mulberry’s majority shareholders, Christina Ong and Ong Beng Seng. Mulberry also has formed a joint-venture distribution company with the Ongs, Mulberry USA LLC, for its U.S. wholesale clients.

The Ongs, Singapore-based hotel and fashion entrepreneurs, own 52 percent of Mulberry, and the remaining shares are quoted on London’s AIM stock exchange. The Ongs, who provided the initial financial muscle for the turnaround, injected almost $2 billion into the company in 2000. They also replaced Saul, with whom they had a bitter boardroom clash in 2002. Later that year, Saul, who founded Mulberry in 1971, was replaced by Godfrey Davis as chairman and chief executive officer.

Robert Burke, vice president and senior fashion director of Bergdorf’s, which also carries Mulberry’s rtw line exclusively in the U.S. market, said the collections were a hit from the start. “The collection came on very strong,” he said. “The bags were an immediate success — and they’ve maintained their momentum.”

Burke attributed part of Mulberry’s success to “pent-up demand” before the bags even hit the U.S. market. Until now, Mulberry hadn’t focused on advertising, but relied instead on celebrities to relay the message. Kate Moss, Beyonce Knowles and Kate Winslet all have carried the Bayswater, a slouchy satchel, while Madonna, Julia Roberts and Gisele Bundchen all have the Roxanne, which has buckled front pockets.

Mulberry has been clever at positioning itself in the U.S. as an “insider’s brand,” and trading on its discreet charms, Burke said. The bags have no logos, they are vegetable dyed (an unusual way to treat leather) and are decidedly not precious.

Indeed, the bags are meant to become increasingly slouchy with wear. The leathers are heavily drummed, which gives them a worn finish with a vintage feel. Mulberry even gives customers a tube of cream to rub into the bags to nourish the battered leathers.

“Mulberry is for customers who want the most important bags of the season — and who take pride in staying under the radar,” Burke said.

The best-selling bags — Bayswater, Roxanne and Blenheim — were designed by Nicholas Knightly, who left the company earlier this year. He has been replaced as design director by Stuart Vevers, whose first collection bows for spring.

Montague said the change — while unexpected — has been a positive one: “Nicholas’ departure was unplanned, and initially felt disruptive. But that’s been replaced by the joy of Stuart’s joining. He’s giving his energy to every single part of the collection.”

Vevers, who has designed accessories for companies including Louis Vuitton, Givenchy and Bottega Veneta, is working on tweaking the bestsellers for spring. “We’re doing some really exciting versions of our classics: A vintage python Roxanne bag, a tassel Bayswate, and fun, decorative stitching and hand-painted designs on the Roxanne. There’s also a new size of the Roxanne called Rosie,” he said.

As for rtw, which accounts for about 10 to 20 percent of Mulberry’s business, Vevers is taking his cue from the bags. “I would like the clothing to fit very closely with the bags, which have a very English point of view. The collections are very ‘day,’ just like the bags, and we are introducing a bohemian and eclectic feel, again taken from the artisanal techniques used for the bags,” he added.

Craftsmen in Mulberry’s Somerset factory hand-drum the leathers and hand-stitch the trim of all the bags. The whipstitch they use for many of the bags is traditionally employed for horses’ bridles. Vevers is in constant contact with the artisans via a videophone link between the company’s West London design studio and the factory floor.

Montague said Mulberry’s future growth will continue to come from accessories rather than rtw. “The rtw keeps us fashion-focused and fresh. It’s a nice little business — and that’s OK. I can’t really see it becoming more than 20 percent of overall sales,” she said, adding that accessories will continue to be the driver. “We will continue to build our library of bag styles and focus on offering great product, and on sell-throughs. We’re on track with our strategies, and we’re not looking too far forward.”

Bergdorf’s Burke said all the ingredients for success are there. “Mulberry has a rich history and they’ve been smart in positioning themselves. I think they have as good a shot as any of the major brands at achieving longevity.”