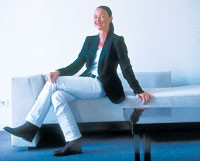 “I feel like the standard-bearer of a new fashion model because a creative director for accessories is something innovative. It’s so energizing,” Giannini said in an exclusive interview with WWD, the first she’s given since she was named to her post in March.

Thankful for the opportunity that came her way, Giannini is aware of the weight she’s carrying as the post-Tom Ford leader at Gucci’s largest and most lucrative product category. Dressed in a formal pinstriped blazer, tempered by a white tank top and jeans and, surprise, no wicked stilettos but brown riding boots, Giannini exudes a cool, calm and collected aura.

Once she digested the promotion, the 31-year-old designer wasted no time and dove right into the product categories she inherited — fine jewelry, watches, eyewear and gifts — besides the ones she already handled: footwear, bags, luggage, hats and home. Now totally under Giannini’s wing are vast and versatile collections that each season include 350 styles of bags; 100 luggage units; 600 pieces of small leather goods; 400 pairs of women’s shoes, and 200 designs for men.

“The toughest part was familiarizing myself with the new sectors and figuring out their strong and weak points. I was fine with bags and footwear because, thanks to Tom, especially after he became creative director for Gucci Group, including Yves Saint Laurent, I was quite autonomous,” said Giannini, who joined Gucci in July 2002.

Giannini so far is proving up to the challenge, introducing everything from the Flora cruise collection to a diamond horse-bit ring and an $8,800 logoed barbecue set. Wholesale unit sales for accessories within the 2005 cruise collection grew more than 20 percent compared with last year.

The Flora theme, which spreads out to embroidered bags, beribboned wedges, wallets and a new watch, was inspired by an iconic silk scarf designed in 1966 for Grace Kelly. Rodolfo Gucci commissioned the 37-tone print of seasonal flowers from Italian artist Vittorio Accornero.

“I wanted to treat an iconic Gucci theme in a fun and ironic way. It’s meant to be an immediately visible alternative to the Gucci logo fabric,” Giannini said.

The newest Flora item is Bandeau, a watch in a special edition of only 2,000 pieces. The round, diamond-sprinkled face is centered on a printed silk wristband, conceived to resemble a scarf wrapped around the wrist. Starting in mid-December, the watch will be available in selected Gucci flagship stores in Milan, Paris, London, New York and Tokyo.

Other highlights for spring-summer include a revised Jackie O. bag in embroidered and sequined suede in hazelnut brown, saffron and turquoise; an oversize suede shoulder bag with half the horse-bit details on the side, and a pair of 3.7-inch patent leather pumps with a round toe in orchid white and petrol blue.

Fine jewelry is a category Giannini enthuses about. It’s also one she claims is filled with “haute joaillerie” potential. “I love the opportunity of working from the design to choosing the stone and studying old techniques,” Giannini mused.

For spring, she extrapolated the horse-bit theme and transferred it to a colorful jewelry collection. There are bit-shaped mesh bracelets and dangling earrings, plus a slew of cocktail rings featuring chunky semiprecious stones either held down by strips of gold that form small bits or slipped through two bit-shaped protrusions. They are all available in white or yellow gold, with or without diamonds, and in a rainbow of stones: turquoise, malachite, coral, yellow topaz and amethyst. With retail prices of $2,000 to $25,000, Giannini feels comfortable saying Bulgari is a competitor.

Like it was for Ford, the past-present axis is still at the base of Giannini’s design motto. “Gucci’s accessories must create an emotional impact that reflects the brand’s identity,” she said. “I think Gucci has to be innovative but also stay true to its tradition, durability and Italian craftsmanship, which, especially in leather goods, is an added value.”

Citing an invigorating atmosphere within the company and top-level support, Giannini’s first step was to strengthen the creative structure by recruiting a handful of young, international designers. Giannini has selected a point person for each design team, subdivided by category, who reports to her, as she did to Ford.

“The idea is to give more unity to the different categories because toward the end, Ford was so overwhelmed with work that some divisions lacked attention,” she said. “I have the opportunity to follow each aspect more clinically.”

For unity’s sake, Giannini also reunited all the teams in one big studio inside Gucci’s Florentine headquarters. “I’m trying to create a single pole where the various designers can interact and check out each other’s sketches, ideas and work. Before that, everyone was kind of scattered around Europe,” she noted.

The team spirit starts at the top with her liaisons with Alessandra Facchinetti and John Ray, respectively the creative directors for women’s and men’s wear. And while the fashion industry raised its collection eyebrows over Gucci’s new “team” approach to design, Giannini is unfazed.

“The difference back then was that Tom would step in as an arbiter, a selector. Now that the collections grow together, sharing the same mood, input, fabrics, color charts, it’s not necessary,” Giannini noted.

The Roman designer stressed that she and Facchinetti are simply reinforcing a work base created two years ago when she joined Gucci. “This new work system doesn’t require an editor because our relationship is more direct and less filtered. And the runway directions come from Alessandra Facchinetti and John Ray,” Giannini said, adding that she’s suffering no inferiority complex from her less spotlight-friendly role.

“It’s all about being sensible. There’s still so much to be done. I love Gucci, which is why Alessandra and I talk constantly and wish one another goodnight most of the time,’ Giannini smiled.