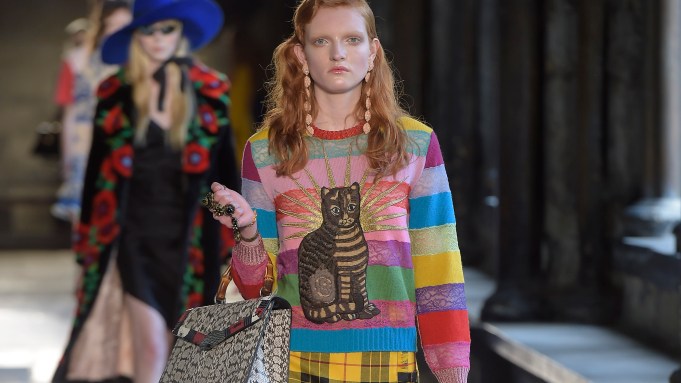 LONDON — Westminster Abbey is becoming something of a good-luck charm for French luxury conglomerate Kering.

When Prince William wed Kate Middleton there in 2011, she in an Alexander McQueen gown, it propelled the global profile of the brand and its creative director, Sarah Burton.

On Thursday, it was Gucci that got lucky.

The 700-year-old church cloisters proved a dramatic setting for Alessandro Michele’s winning cruise 2017 collection, and only heightened its quirky charms.

While the church — the traditional place of coronations, nuptials and burials for British monarchs — certainly bears the weight of history, Michele didn’t let it interfere with the show. Instead, he took a lighthearted, freewheeling approach to the country’s fashion legacy, absorbing punks, Scots, Victorian ladies and even Staffordshire dog figurines into his nerdish, retro-tinged fashion universe.

The choral soundtrack, including a haunting version of the traditional English ballad “Scarborough Fair,” only amplified the show’s emotional tug. Inspired by the English penchant for decoration, Michele let his colorful, more-is-more impulse run full throttle.

Guests sat on tasseled velvet and tapestry pillows embroidered with flowers, cats, rabbits and tigers — elements that were patched onto everything from studded denim jackets and intarsia fur coats to delicate evening gowns.

Male and female models — including Nineties runway stars Erin O’Connor, Jacquetta Wheeler and Hannelore Knuts — strolled under the covered stone passages in their Gucci finery, their colors as bright as detergent packaging and the styling as unhinged as Shoreditch on a Friday night.

“I really love the English aesthetic and it’s something that belongs to my language,” he said backstage. “English culture is in a way very close to my beautiful chaos.”

He acknowledged that he thought he was dreaming when he considered Westminster Abbey as the venue.

“It’s crazy because I think only in London can a church say ‘yes’ to a fashion show. I was thinking of a place that represents the spirit and the powerful beauty, I mean look at this place,” he marveled, pointing to an image of Elizabeth I in one of the soaring, stained-glass windows.

“Westminster Abbey is something very romantic in a way; it’s that kind of unknown Gothic place full of history,” he continued. “I also love the idea of Gothic, I always say that gothic came from Rome.”

The collection nimbly pinged between eras and moods — a ravishing Forties-style polka-dot gown one minute, bleach-splattered jeans and logo T-shirts the next — in a way that seems like second nature to Michele, who has rapidly wrenched Gucci from its pigeon-hole of jet-set, Capri chic.

In his own way, the Italian designer is shaking up the fashion system with androgyny and eccentricity as surely as Vivienne Westwood and Malcolm McLaren did with their punk shock treatment in the Seventies.

“There’s something very punk about the idea that you can wear a skirt from your granny’s wardrobe,” he mused.

While the decision to stage a cruise show in London — and set it at the Abbey — may have been Michele’s, the move was part of an ongoing effort to seed the image of the new Gucci in the minds of consumers, the industry and press.

Michele showed his cruise collection in New York in June, and Marco Bizzarri, Gucci’s president and chief executive officer, said the messaging around these special shows has been key — especially for the end-consumer.

“It’s important for us to create more moments of communication for the consumer. We really need to make a push before revealing products on the runway. This time, we wanted the cruise show to help maintain the momentum we’ve already created, and allow us to continue communicating what we’re doing.”

He said that especially in the beginning — Michele has, after all, only been in the top job since January of last year — “the more you communicate the different positioning and the different aesthetic, the better it’s going to be because it helps the consumer understand quicker what you’re doing.”

According to Bizzarri, the London market has already been responding to the new Gucci.

He said while the U.K. has always been an important region for the brand, it has seen “important growth” in the last few months despite the drastic — and for many brands, damaging — change in tourist flows.

“It’s really picking up and we’re getting back a lot of the local clientele that we lost. I think the challenge in the beginning was really to renew the attention and emotion around the brand — and bring people back into the shops. People who haven’t bought Gucci for a long time have come back to buy it again.”

As with other cruise mega-productions this week, Gucci’s came with a host of spirited young talent for its front row — all of whom seemed to be in a buoyant mood.

There was Elle Fanning, in a white dress as light as a cloud giving a bear hug to her “A Storm in the Stars” co-star Bel Powley, who was decked in a tailored baby pink lace trouser suit.

Fanning was in London to promote her latest film “The Neon Demon” and was sat next to the film’s director, Nicolas Winding Refn.

“I’ve been here for two days, I leave tomorrow. You need to be very good at jet-lag when you do a press tour,” said the chirpy Fanning, adding that she was gearing up for her next project, Sophia Coppola’s new movie, “The Beguiled,” a remake of the 1971 film that starred Clint Eastwood.

“It’s a little twisted,” she said, “although we’re just at the beginning of the process” of mapping out the plan for the film. Fanning will star alongside Nicole Kidman and Kirsten Dunst in the story that takes place at an all-girls school during the Civil War.

Powley, meanwhile, has been preparing for her next role as a Lithuanian girl who’s taken with her family to a Siberian gulag, part of Stalin’s mass deportations that started in 1941. “It’s not a comedy,” she deadpanned.

As part of her research for the film “Ashes in the Snow,” Powley said she spent time with a woman who survived one of Stalin’s notorious prison camps.

Ella Purnell has also been boning up on World War II history for her role as the prime minister’s secretary in “Churchill.” It’s certainly lighter than Powley’s load.

“There is a whole YouTube video about how women worked at that time, how they were supposed to position their knees, feet and at what angles to keep their bodies,” she said.

An East London native, Purnell is also helping to set up a charity called Educate to Eradicate, which will train schoolteachers to help young British victims of honor-based violence, such as enforced marriages.

For her part, the Italian actress and director Valeria Golino said she’s taking a break — albeit a very short one — from film. She said she’s plain tired after serving on the jury at the Cannes Film Festival.

“I’m resting! Serving on the jury was a lot of work, it was a duty, but lovely all the same — and definitely better than working in a mine.”

She gazed around the stone cloisters and the expanse of green garden at their center. “Here, I am on vacation, and I’ve come to honor Gucci and Alessandro,” said Golino, who will next be directing a film called “Eurphoria.”

Musicians also had their place in the front row. There was Will.i.am, who rocked up a few minutes before the show began and A$AP Rocky, the rapper, record producer and die-hard fashion fan.

“Right now, obviously, I’m really into Gucci and Dior. What Kris van Assche is trying to do, especially with upcoming seasons and whatnot…I’ve been talking and I’m excited to see those. Believe it or not, I manifest that fashion inspiration to my music because I get inspired by film and fashion,” he said.

Flo Morrissey, the young British singer-songwriter, had traveled back from her home in Paris for the show. “I’m living there for a year and working on my second album,” said the 21-year-old, whose first album, “Tomorrow Will Be Beautiful,” came out last year.

“I’m exploring my next direction. It’s a bit more folk than pop and I’m taking my time with it. It’s a bit more romantic. I’m still thinking about names. It’ll come out at the end of next year.”

She said she’s still mulling costumes for her next tour, which kicks off in Beijing in August, but hinted at some collaborations with top designers.

Although the Abbey has rented six of its spaces for meetings, receptions and events — including its café, terrace, garden and Chapter House — the cloisters venue came with a slew of restrictions to which the fashion crowd is rarely accustomed.

These included no posting on social media before the show, speaking in low voices, refraining from smoking anywhere on the property, and limiting smartphone snaps to the show and guests: No clergy or choir boys.

The limitations stood in contrast to Dior’s blowout at Blenheim Palace earlier this week, a bonanza of photo ops from a branded pub night and New Look green hedges to a sumptuous lunchtime ride on the Orient Express out to Oxfordshire.

(Gucci extended rules of its own to its after party at 106 Piccadilly, restricting outside photography so guests – including Charlotte Casiraghi, Georgia May Jagger, Bella Freud, Jacquetta Wheeler, Jemima Jones, Alexa Chung, Pixie Geldoff, Jack Guinness and Fanning – could let their hair down and take in a performance by Annie Lennox.)

One of the world’s most storied churches, Westminster Abbey has been the setting for 16 royal weddings and every coronation since that of William the Conqueror in 1066.

The Abbey was founded in 960 as a Benedictine monastery, and rebuilt by St. Edward the Confessor in 1065. Henry III oversaw the construction of the building that stands today across from the Houses of Parliament. It is considered one of the most important Gothic buildings in England.

Clergy and senior members of the Abbey’s 300 staff live in homes clustered around the cloisters.

Reverend Dr. John Hall, the dean of Westminster, defended the Gucci event in an interview with The Times in February. “Above all, the Abbey is a place of worship, but it also feels part of what we ought to be doing to enable people to discover the mystery and wonder of the Abbey,” he told the paper.