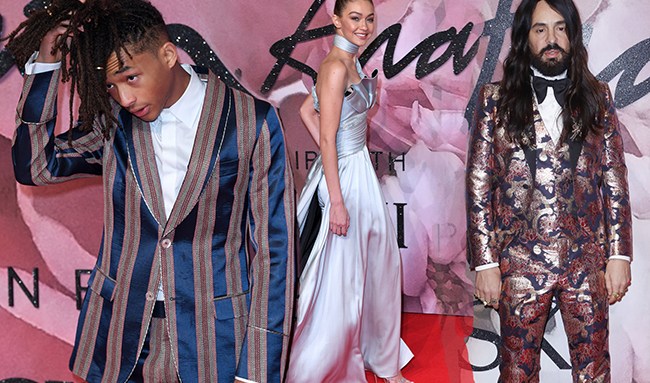 LONDON – It was a big night for Gucci – and for Demna Gvasalia, too – at the Fashion Awards 2016 on Monday night at Royal Albert Hall.

Gvasalia for Balenciaga won international ready-to-wear designer, while his brand Vetements scooped international urban luxury brand, a new category at the rebranded event, which was known until recently as the British Fashion Awards.

The New Fashion Icons prize went to celebrity siblings Jaden and Willow Smith, the children of Jada Pinkett Smith and Will Smith, while international model went to Gigi Hadid.

Other award winners’ names had previously been revealed: Ralph Lauren for outstanding achievement in fashion; Bruce Weber, Isabella Blow Award for Fashion Creator; and Franca Sozzani, The Swarovski Award for Positive Change. The brand is the event’s principal sponsor.

It was the first time the ceremony took place at Royal Albert Hall, and the event was the inaugural annual fundraiser gala for the British Fashion Council Education Foundation charity.

The charity offers scholarships to bachelor-of-arts and master-of-arts students, as well as funding for apprenticeships. The BFC aims to raise 10 million pounds, or $12.7 million, over the next 10 years for the charity.

Some 4,000 people attended the event on a cold winter’s night, with guests including David Beckham, who handed Lauren his award at the end of the evening; Kate Beckinsale, who presented Rocha with her prize; Lady Gaga; Stella Tennant; Salma Hayek Pinault; and Tom Ford, who gave Sozzani her award.

As reported, 32 “creative influencers” were also recognized during the ceremony for their behind-the-scenes work in the industry.

The evening took place on a grand scale, with dinner tables crowding the ground floor and giant digital screens dominating the room.

“I’m so nervous I can’t believe it,” said Ralph Lauren after accepting his award. “I feel like I’m still 22.” Addressing the young people in the room, he said: “This is the beginning of a new era — there’s a whole lot to look forward to.”

Michele, swarmed by well-wishers and guests at the end of the evening, still managed to maintain a robust sense of humor. He was dressed in a shiny pink-and-black-brocade three-piece suit that he had made for the evening.

Michele wasn’t the only one sparkling on the night. “If you like my bow tie, you should see my underwear,” said Jared Leto. “I’ve been sitting on rhinestones for the past hour and a half.”

There were streams of tears, thank-yous — and lots of jabs. “Some of my friends are so dressed up tonight I don’t even recognize them,” said Weber.