Gucci Gets Ahead of the Grammys

Creative director Frida Giannini was an honoree at the inaugural Unicef Women of Compassion luncheon. 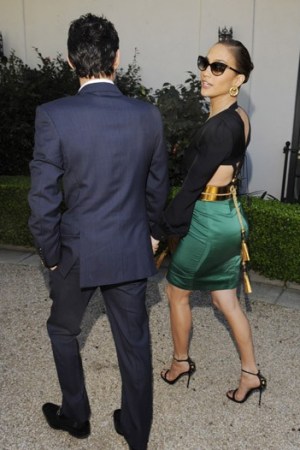 It was a big Grammy weekend for Gucci. On Friday, creative director Frida Giannini was an honoree at the inaugural Unicef Women of Compassion luncheon. Held beneath a canvas tent on Colleen and Bradley Bell’s estate, the event drew Mary J. Blige, Camilla Belle, Marianne Pearl and Jennifer Lopez, who presented the award.

Holding an event outdoors in summer-like weather does have its challenges. A persistent bee nearly thwarted Lopez’s speech, causing her to pause and joke, “That bug is trying to steal my shine.”

The next day, the open-air theme continued as Gucci co-hosted the RocNation pre-Grammy brunch on the rooftop of Soho House West Hollywood, replacing all the furniture with aqua banquettes and sleek silver tables. While DJs Mark Ronson and Harley Viera-Newton spun a mix of oldies, Jay-Z and Rihanna (the two were actually in attendance in the VIP section, along with Beyonce), guests Charlize Theron, Will Smith, Mario and Ryan Phillippe tried to stay cool with iced teas and lemonade.

“This is a great weekend we are passing here in L.A.,” said Giannini. “One of my biggest passions in life is music and it is always very inspirational for me.”

In addition the pieces she designed to benefit Unicef and the Recording Academy, Giannini also created a studded dress to wear to the event. “I wanted to be very tough and very rock,” she explained.

“Rock is all about fashion and vise versa,” observed Ellen Pompeo. “I think Jay’s an icon and everything in his life he does with meticulous style, so I think [he and Gucci] are a perfect match.”

Apparently, Beyonce agreed, leaving the cocoon of the VIP area to join Giannini in front of the DJ booth to dance to Rihanna’s “Only Girl in the World,” which she sang along with.

Seal, who brought his own 35 mm camera to capture event, went over to exchange a few words, while Ne-Yo commented, “There’s a collection of very sexy people in a sexy atmosphere. This is the place to be right now.”