The tale of this storied label easily could be fodder for an epic motion picture. 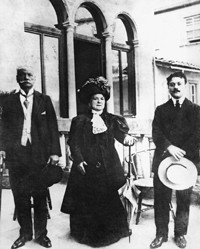 The tale of this storied label easily could be fodder for an epic motion picture. From humble beginnings 85 years ago, Gucci has grown into a massive retail and manufacturing empire, known the world over for its trendsetting fashion, coveted leathers and sexy lifestyle. The saga ranges from success to near financial ruin to family feuds and scandals to one of fashion’s most remarkable reinventions.

Here are highlights from the history of the fabled brand.

Today’s Gucci empire stems from the creativity and industriousness of one man, Guccio Gucci, who started with a small shop in Florence, and whose vision created perhaps the first lifestyle brand in fashion.

Gucci’s experience in his late teens at the Savoy Hotel in London and later at prestigious leather manufacturer Franzi in Florence at the turn of the 20th century were formative, pivotal steps for the future of his personal and professional life.

Gucci was born in Florence in 1881, moved to London in 1897 and returned to Florence in 1902. His brush with luxury, catering to the nobility staying at the Savoy, left an indelible mark, which he put to good use once he entered the leather goods business.

“Italy’s century-old leather goods tradition was available to a lot of people, but Guccio Gucci exploited this potential in the best possible way,” said Francesca Polese, fashion history professor at Bocconi University. “This was one of Gucci’s main strengths, one that made his name famous around the world.”

Relying on his experience at Franzi, in 1921, Gucci opened his first store in Florence, on central Via Vigna Nuova, off the elegant Via Tornabuoni. A second store opened on Via del Parione in 1924.

According to the company’s former chief Domenico De Sole, Gucci was “legendary, a marketing genius, very good at dealing with people, and fully understood the product.” De Sole knew Gucci through the words of Gucci’s sons, especially Rodolfo. “I felt I knew [Guccio] because Rodolfo, being an actor, often impersonated his father,” said De Sole.

Guccio was innately elegant and always immaculately turned out. “Shop assistants were asked to wear tuxedos, and this trickled down directly from Guccio Gucci and his own style,” said Franco Gittardi, a veteran Gucci employee who directed various boutiques around the world, including the Milan and Chicago doors. According to Gittardi, Gucci left a strong mark on his sons and how they managed the business. Gittardi recalled tales of “Guccio jumping up and down on a suitcase to show how sturdy it was. He really knew how to sell his merchandise.”

Gucci also personally checked the store windows first thing in the morning and he wanted his sons to stay in the boutiques to be in touch with their customers. “Floor, floor, floor. That was his motto, to which his sons and all store managers had to abide. It was absolutely unacceptable for any of us to sit in an office,” said Gittardi.

Aldo Gucci started working with his father in 1925. Shortly after, three children were born from his marriage to the English Olwen Price: Giorgio, Paolo and Roberto. Vasco also became involved in the business, while youngest brother Rodolfo was at first attracted to the movie world. Under the screen name Maurizio D’Ancora, Rodolfo became an actor and married an actress, Alessandra Winklehaussen, in 1944. Their son Maurizio, who was born four years later, was named after that pseudonym.

Aldo, who first envisioned the brand’s expansion in Italy and around the world, convinced his father to open a store in Rome on the elegant Via Condotti in 1938.

Outside circumstances forced Gucci to find alternatives to leather in 1935, when Italy faced an embargo put in force by the League of Nations following Benito Mussolini’s invasion of Ethiopia. Gucci developed a special woven hemp grown in the Naples region that featured the first signature print: a series of small, interconnecting diamonds in dark brown on a tan background. Gucci’s first successful suitcases were made with this special hemp. He also worked with rope, linen and bamboo.

Comparing Guccio Gucci with another pioneer of Italian fashion, Salvatore Ferragamo, Polese said that both “found ways with their creativity to overcome the difficulties of finding raw materials and designed some of their best pieces, which later became the brands’ iconic accessories.”

At the end of the Forties, Gucci created the first bamboo-handle bag, inspired by the shape of a saddle, which became a hit bag for the It ladies of the day, from Grace Kelly to Elizabeth Taylor. The equestrian world became a pool of inspiration for Gucci, with designs inspired by the horse bit, the green-red-green webbing of girth straps, the double stitching and the stirrups. Aldo Gucci even started recounting a tale about the family being noble saddle makers at medieval courts, contributing to what would now be defined as a fashion lifestyle concept. Guccio Gucci personally designed the family’s crest: a horseman (or knight) carrying a suitcase, with a rose and a sailing wheel stylized above him. Pigskin, which became one of the brand’s signature materials, was introduced by Aldo Gucci after World War II.

In 1940, Aldo, Ugo, Vasco and Rodolfo become minority shareholders of the company. After the war, Rodolfo abandoned his movie career, and in 1951, he moved to Milan to manage the new Via Montenapoleone boutique.

Guccio Gucci maintained control of the firm until he died in 1953. He had seen the company he founded become a status symbol and a fashion brand known around the world, just as the first international fashion shows were being organized in Florence by Giovan Battisti Giorgini.

1881 Guccio Gucci is born in Florence.

1902 He returns to Florence and joins the leather manufacturer Franzi.

1921 Guccio opens the Gucci business in Florence with stores on Via Vigna Nuova and then on Via del Parione.

1935-36 As a result of a League of Nations embargo against Italy, Gucci finds alternatives to imported leather and other materials. The company develops a specially woven canapa, or hemp, from Naples, printed with the first signature print — a series of small interconnecting diamonds in dark brown on a tan background. Gucci’s first successful suitcases are made from this.

1938 The Rome store opens on Via Condotti.

1947 The first bamboo-handle bag, inspired by the shape of a saddle, is thought to be produced.

1948 Maurizio Gucci is born to Rodolfo and his wife, Alessandra.

1951 Rodolfo opens Gucci’s first Milan store at Via Montenapoleone around this time, and the green-red-green web becomes a hallmark of the company.

1953 Gucci becomes one of the pioneers of Italian design in the U.S. when Aldo opens Gucci’s first American store in the Savoy Plaza Hotel on East 58th Street in New York.

1953 The Gucci loafer with metal horse bit is created.

1955 The Gucci crest is registered as trademark.

1960 The New York store is moved to a prestigious address next to the St. Regis Hotel.

1961 The bag subsequently known as the Jackie O is launched. Around this time, the GG logo is applied to canvas and used for bags, small leather goods, luggage and the first pieces of clothing.

1966 The Flora scarf print is designed for Princess Grace of Monaco.

Maurizio Gucci, son of Rodolfo, goes to work with his uncle Aldo in New York, staying until 1982. Around this time, Gucci is hitting the heights of fashionability. A new store dedicated to clothing is opened at 699 Fifth Avenue in New York; 689 Fifth Avenue is opened to specialize in shoes, bags, luggage and accessories.

1975 The first Gucci perfume is launched.

1981 The Gucci Accessory Collection is launched. Gucci ready-to-wear parades for the first time at the Florentine fashion shows at the Sala Bianca, playing heavily on the Flora print.

1985 The Gucci loafer is displayed at the Metropolitan Museum of Art in New York and becomes part of the permanent collection.

1993 Maurizio Gucci transfers his shares to Investcorp, ending the family’s involvement in the firm.

1996 Tom Ford’s fall 1995 collection of Jet Set glamour is a massive hit, putting Gucci back at the forefront of fashion.

1996-97 Tom Ford’s collection of white cutout jersey dresses fastened with abstract horse-bit belts sets the sleek, sexy, modern style of the Gucci Nineties look — and establishes it as a house dedicated to the kind of evening glamour that attracts Hollywood actors and actresses.

1999 The Jackie O bag is relaunched in many colors and variations, triggering a huge and sustained response. It opens the era of the Gucci must-have “It” bag.

1999-2001 Gucci’s name becomes associated with Gucci Group when the strategic investment firm PPR (Pinault Printemps Redoute at the time) starts focusing on building a luxury portfolio, of which Gucci was and is still the cornerstone.

2004 Ford and De Sole leave the company when they and parent PPR fail to come to terms on a new contract.

2006 Giannini adds the role of creative director for men’s wear.