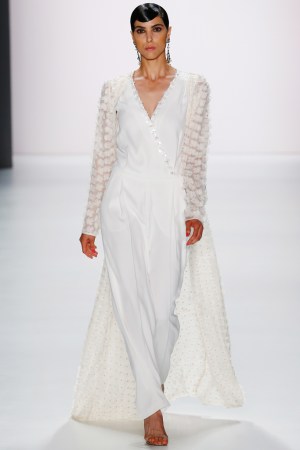 German celebrity favorite Guido Maria Kretschmer is as famous for his decadent red carpet gowns as he is for his TV presence as the face of Actimel yogurt in ads and the host of reality show “Shopping Queen.” This season the designer had shopping kings in mind, too, as he incorporated a well-rounded selection of men’s wear into the collection for the first time.

The show’s title, “Bon Voyage,” was overtly referenced in Breton-striped men’s T-shirts worn under fitted black and navy suits. Thicker stripes were also seen on men’s shorts and in the women’s wear on a puffy blue-and-white-striped tulip skirt and sequined cropped jackets done in pink and blue. Fitted ivory cigarette pants with a matching jacket were the highlights of the women’s wear, but some white dresses suffered too much embellishment and bordered on twee.

Kretschmer devoted the same attention to cut and finishing with his men’s offerings as with his women’s and his slick men’s smoking jackets in black and white looked well-tailored. The silver sequined version, however, was more Las Vegas than Saint-Tropez.