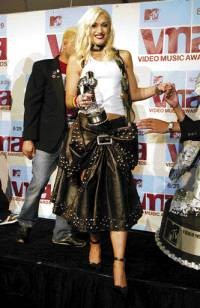 It appears that one of the most fashionable women in rock didn’t realize she’d grabbed two lefties of her Adidas boxing booties this morning, an easy goof considering the pile in her closet is made up of 14 pairs of her preferred concert touring footwear.

Yet, ever the consummate pro, Stefani strikes a stance as if her toes don’t know the difference. Today, inside a Hollywood Boulevard studio, she’s not only a model, she’s a designer — one in company with Diane Von Furstenberg and interiors creator Jonathan Adler. The rock star has teamed up with the handbag maker in a collaboration labeled “Gwen Stefani – L.A.M.B for LeSportsac,” due to arrive in stores Sept. 1.

It’s the first fashion product available at retail that Stefani has designed since announcing to WWD last summer that she would be launching her own line, named L.A.M.B., after one of her favorite words. She joins a growing list of music stars expanding into fashion — from Eminem to Eve. The timing of Stefani’s apparel collection has since been pushed back a season for the second time and is now expected for spring 2004.

Who can blame her? Not only did she decide to start a fashion line and collaborate on this bag venture, she did a global tour with her band, No Doubt, to promote their double-platinum album, “Rock Steady,” only pausing to get married — twice, no less, in London and Los Angeles — to Bush frontman Gavin Rossdale. The New Year’s resolutions to ease up the pace seemed out the window when No Doubt headlined Super Bowl XXXVII’s half-time show, an event televised to 100 million football fans worldwide.

In the meantime, Stefani and the public are getting oriented to what she can do in totes, wallets and other LeSportsac sacks. And to think, she never much cared for carrying a purse until about three years ago.

“It’s been really good for me and for designing my line just to see how the process works,” says Stefani during a break in the recent afternoon shoot. “I’ve found it a lot harder doing the clothing line because you don’t have this team like I’ve had with LeSportsac that’s been doing it all these years. I was flattered that someone would give me the chance to design something. I’ve designed tons of things for myself, which is no big deal because I’m wearing it. But to do something for other people — that’s cool.”

For Timothy Schifter, chief executive officer and co-owner of New York-based LeSportsac, the partnership is so cool, in fact, that he was willing to take the line his parents founded in directions it had never gone before in its 29-year history. The marketing campaign alone is a departure. Aside from running ads in the September and October books of Vogue, W, Teen Vogue, Lucky, Elle and In Style, as well as on top of Manhattan taxi cabs, spots will hit radio — a first for the company and not a common option in the fashion industry — all 34 of LeSportsac’s own doors worldwide will sell No Doubt albums.

“Gwen’s got so many great ideas, she’s so easy to work with,” says Schifter, who first took note of the rocker when she entered the Dior Couture show last January. “We decided we wanted to take our designer series to the next level.”

Like her predecessors Von Furstenberg and Adler, Stefani came up with a print. In bright white Olde English lettering, Stefani’s favorite words — “love,” “angel,” “music” and “baby” — stripe the black bags. Included is the line “Where did my lamb go?” from the 2002 No Doubt hit “Platinum Blonde Life,” and referencing the long-anticipated apparel collection. Two other lines, dubbed the Black Stripe and Teak Stripe, are made of black and brown nylon, respectively, with a single red, green and gold web strip down the center of each side. “My Rasta stripe,” interjects Stefani, who’s also wearing a terry sports band of the color trio on her right wrist.

However, the collaboration with the singer goes beyond the earlier ones, since Stefani has been fully involved from the design to the image creation. Design-wise, LeSportsac has rebelled against its own classic look. Its signature ripstop nylon is embellished with leather corner patches at the base and metal hardware instead of nylon buckles. The traditional handles of herringbone weave webbing have been replaced by guitar straps.

“I grew up in Orange County and I always loved the whole tattooed thing down there,” explains Stefani. Some 40 minutes south of Los Angeles, the area she and her band mates grew up in not only boasts Disneyland but a thriving punk and alternative music scene that soundtracks an even larger skateboarding and surf culture. Even with all of the couture trappings of new pals such as John Galliano, who dressed her in Dior for her nuptials, Stefani remains a poster girl of O.C. style.

But the winner of best Rock Style at the 2001 VH1/Vogue Fashion Awards insists she prefers playing down her image. “It’s always odd to talk about my fashion. It’s something you look at it — you don’t need to talk about it. The fashion part for me has really always been secondary. Being in a band, you spend a year of your life putting your heart and soul into this music and telling the story of your life. OK, so then you get dressed up and share it with people. But everyone always brings it up. It’s equal parts for me and the guys are just so bored,” she huffs in sympathy for her band mates.

Still, she admits, “I’ve always thought about being a fashion designer. But I never did anything about it.”

Chimes in Schifter: “You want to be a fashion designer. I want to be a rock star.” He did play a groupie of sorts last summer, hitting a No Doubt show in New Jersey and another in New Mexico — in order to go over details, of course. Much of it, though, was hatched over the kitchen table in Stefani’s Griffith Park home.

The end result is the largest of LeSportsac’s designer series: eight small leather goods, including wristlets, cosmetic bag clutches, wallets, priced at retail between $20 and $58; and 10 handbags and totes, from $48 to $128. There’s even the “Tour Bag,” a travel duffel at $158. A round CD case with a wrist loop and an I-Pod case round out the music fans’ needs.

Schifter declined to comment on sales estimates for the collaboration, although industry sources estimated sales of $5 million to $7 million at retail in the first year. The collection will show at the March market and is expected to be sold through its global network of specialty, department and duty-free stores. Sight unseen, Colette in Paris ordered the line, an exclusive in France, he says, having just returned last week from meeting with the retailer.

Industry sources estimate LeSportsac’s annual retail sales at about $75 million. Schifter did report that the company’s 2002 U.S. department store retail sales grew 22 percent. “We are growing very successfully. What’s very important is this line is being viewed as plus business to our Classic Collection. It’s truly a new collection for us. We’re looking to a particularly good second half of the year.”

Stefani was the only choice, he believes, considering the fabricated style of so many pop stars. While she’s relied on stylist Andrea Leiberman over the years, it’s been more of a partnership given Stefani’s active role in creating her own image. Notes Schifter: “Gwen’s the real thing. It will go a long way with consumers that she’s involved. She really feels the product is hers — and it is.”