Gwen Stefani is hoping she has another hit on her hands. 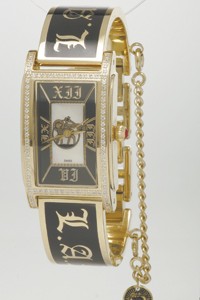 NEW YORK — Gwen Stefani is hoping she has another hit on her hands.

The singer and designer has launched a collection of women’s watches under her contemporary L.A.M.B. label. The 28 styles will bow exclusively at Nordstrom early next month, with wider distribution in other high-end department stores and specialty boutiques soon thereafter. Prices range from $195 to $475.

Stefani broke into the accessories category in fall 2003 when she collaborated with LeSportsac to introduce L.A.M.B. for LeSportsac bags, combining LeSportsac’s signature nylon silhouettes with a print of Gothic script. Industry sources said the line reeled in $35 million during its five-season run.

Stefani said in April that she would reenter the handbag market under her L.A.M.B. and Harajuku Lovers labels, partnering with Tim Schifter, formerly of LeSportsac and now head of his new accessories company, Schifter & Partners. Stefani is also looking into an eyewear license, although no details were available at this time. She already produces L.A.M.B. footwear with Royal Elastics.

“I think L.A.M.B. caters well to an accessory-buying customer,” said Rudy Theale, president of Vestal Group Inc., the eight-year-old timepiece company based in Costa Mesa, Calif., that designs watches under its own name and owns the licenses to create timepieces for Rocawear, Paul Frank, L.A.M.B. and now Steve Madden (see story, this page). “When I think of the L.A.M.B. brand, it accentuates Gwen’s personality. She’s street meets glamour.”

Theale said he has been in negotiations to finalize the watch deal with Stefani for a little over a year, and that her involvement in creating the product was important for both of them.

“It’s her brand,” said Theale. “She’s in every design meeting and oftentimes runs them. She knows what she likes and what she is inspired by, and then she likes to hear suggestions as well, so it’s a true collaboration.”

Theale said Stefani will bring in everything from rusted Italian sardine cans to vintage jewelry to provide direction to the Vestal team. The end results, Theale hopes, are a novel take on fashion watches — a necessary ingredient in what industry insiders agree is an increasingly competitive category.

Key motifs in the line include the L.A.M.B. logo, which appears at the center of dials and on delicate charms; Gothic script and numerals treatments; enamel detailing; Swiss quartz movements, and a garnet stone that finishes each watch’s crown.

“I designed what I loved and wanted,” said Stefani, adding that the birth of her first baby, Kingston James McGregor Rossdale, last month made time even more important for her. “In the past, I didn’t wear watches very often, because I couldn’t find anything I really liked.”

Stefani said watches have been the most challenging design development process of any of the L.A.M.B. products.

“There are a million design-related decisions that need to be made on each watch, and there’s a lot to learn about the technical side of watchmaking,” she said. “It’s been an education, and I’m very happy with the final product.”

Stefani said some of the watch styles are seasonal and meant to tie in with the sportswear collection. Other styles are meant to become signature pieces. Theale added that the firm will grow the line beyond 28 styles for its upcoming holiday collection, based on expectations that it will do well at retail.

Vestal said it will be launching timepieces under the Harajuku Lovers label before the end of summer.