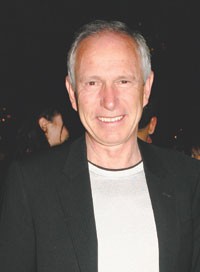 NEW YORK — Wednesday night in Central Park, H&M showed off in a major way. The Swedish retailer let loose a fall collection full of clothes that looked and felt as though they’d just paraded down a Paris runway. And there was a supersized party to go with it, complete with dinner, dessert and a performance by Kanye West, who noted that, while he had never worn H&M, “I’ve had girlfriends who’ve worn it, so I’ve been through the store.”

Just as the sun went down, more than 800 editors, industry types and bold-faced names filed into the 20,000-square-foot tent erected near the park’s 72nd Street entrance. Under a canopy of fresh ivy and hanging lanterns, H&M’s top execs — chairman Stefan Persson, chief executive officer Rolf Eriksen and head designer Margareta van den Bosch — mingled and chatted with the crowd, all very pleased with the setup, the turnout and, most importantly, the weather, which had threatened thunderstorms. “I think H&M made a pact with God to have such a great night,” said Gloria Baume, Teen Vogue’s fashion market director.

Beyond a wall of 330,000 fuchsia roses was the cavernous arena-style room with a runway crisscrossing the floor, surrounded by large, low picnic tables, pillowed benches and four suspended movie screens flashing videos. Expectation ran high, with people wondering how H&M would pull off such a mammoth show.

Clearly, this was a multimillion-dollar endeavor considering that H&M flew in more than 300 people and put them up in hotels for three nights; there was catering for 850 people, and there were fees for 150 models, 100 hair and makeup artists and three musical performers. And all those flowers don’t come cheap. But the cost for a romantic Central Park setting? Happily, not a penny. A generous corporate sponsor of the Central Park Conservancy, H&M was allowed use of the space gratis, according to New York City Parks Department spokesperson Warner Johnston. (Corporate sponsorship dollars are not publically available.)

“There were people asking, ‘Is it true — 150 looks?’ So there was a little anticipation on the ‘oy’ side,” said Peter Arnold, executive director of the Council of Fashion Designers of America. “But it was executed like a military maneuver.” Indeed, all those exits took 17 minutes, start to finish, since models came out in packs of five or more.

Just as impressive were the clothes themselves, split into three separate trends of rustic, minimal and “Barrococo,” a mix of opulent influences. Sure, H&M has been doling out season after season of easily consumed chic — a sequined shirt for $19.90 here, a little black dress for $24.99 there, a wool military coat for less than $100. But what came out by the droves wasn’t just a quick fashion fix.

“It was well thought out. The quality looked expensive and it was styled fantastically,” said Nicole Fritton, Glamour’s senior fashion market editor. “You forgot the clothes cost $15.”

Anne Christensen, stylist for The New York Times Magazine, especially liked the first group of Nordic-inspired knitwear looks. “It was very Kenzo 1982 and it looked great,” she said. “A visual eyeful.” She and other editors weren’t completely sold on the minimal section, but pointed to their commercial viability.

But the night wasn’t just about the clothes. Many appreciated the chance to lounge around the picnic tables with friends and a glass of wine. “We had time to breathe and relax,” said Allure’s fashion director, Sasha Charnin Morrison. “We weren’t taking fast and furious notes like usual because there was so much going on. You just had to put the pens down and take it all in.”

In terms of execution, the production was “flawless,” noted Arnold. In the days leading up to the show, indeed, mere minutes before curtains up, backstage was a hub of calm. No drama, no tears, no stomping of stilettos. More than one guest noted how civilized it was for such a huge crowd.

Backstage, makeup artist Tom Pecheux said, “This has been so well organized. The H&M people are investing a lot of money in this and they could be demanding — but they’re not. They’ve  been wonderful.”

Afterward, model Caroline Winberg said, “It was unbelievable. The only thing that compares is the Dior show.” Fellow model Maggie Rizer added, “A show of this scale reminds me of Viktor & Rolf.”

“I was blown away,” said Elle fashion director Nina Garcia. “It wasn’t like you were there for work. It really was spectacular.”

Even Traver Rains and Richie Rich, whose Heatherette shows are notorious for their extravagant party atmosphere, were awed. “In our minds, this is what we’d do if we had the money,” said Rains.

After the bento-boxed dinner of lobster and beef was cleared, the audience grew as backstage crew came out to enjoy the concert. In dramatic fashion, a piano was lowered from the ceiling on a circular stage and pianist John Legend and hip-hop violinist Miri Ben-Ari rocked out for three songs before Kanye West came running out. Models circled the stage, passing cigarettes and dancing while guests such as Catalina Sandino Morena, a recent Oscar nominee for her lead in “Maria Full of Grace;” Piper Perabo, and Helen Schifter did their best hip-hop head nods from their seats.

Charnin Morrison had such a great time, she was actually trying not to talk about it the next morning. “After something like that, it’s kind of mean to say to people, ‘I wish you could have been there.’”

— With contributions from Lauren DeCarlo, Vanessa Lawrence and David Yassky