After 60 years in business, the family that runs H. Stern hasn't lost its passion for gems nor its entrepreneurial spirit. 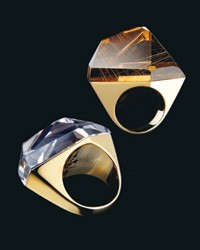 NEW YORK — After 60 years in business, the family that runs H.Stern hasn’t lost its passion for gems or its entrepreneurial spirit.

H.Stern has secured a foothold in the fine jewelry marketplace during its six decades, competing with companies such as Cartier, Tiffany & Co., Harry Winston and Mikimoto, all of which are at least twice as old. It has done so by bringing kaleidoscopic colors into its pieces and by tapping architects, musicians and most recently fashion designer Diane von Furstenberg to collaborate on collections.

“Being in the jewelry industry for 60 years is not so long,” said Ronaldo Stern, chief executive officer of the jewelry company his father, chairman Hans Stern, founded in Rio de Janeiro in 1945. “But what my father has done in his lifetime makes us very proud and speaks of the brand’s legitimacy in every way.”

Hans Stern, born in Essen, Germany, in 1922, emigrated to Brazil in 1939 and at age 23 founded a precious stones firm in Rio de Janeiro.

“I fell in love with the gems of Brazil,” Hans Stern said. “As a young man, I couldn’t understand why they weren’t more valued, more desired. They lacked nothing compared to the more known gems.”

Stern was so enthralled that he erected a gemstone museum in 1980, where tourists view the collection of 1,100 tourmalines in a profusion of colors that Stern has amassed.

While Stern’s love for color in tourmalines and emeralds, which are also indigenous to Brazil, was evident in his designs, it was his son, Roberto, creative director of the company, who spearheaded the brand’s restructuring in 1995 that eventually led to its differentiation in the contemporary market. He streamlined stores and moved the brand toward creating more highly stylized jewelry.

The flagship on Fifth Avenue here was redesigned in 1997 as a model for the other three U.S. stores — two in New York and one in Miami — and the 165 units worldwide. Its freshening-up included glass and chrome cases to house the jewels, and polished-wood walls inset with cases featuring the nature-inspired Golden Stones, Spring, Cobblestone and Sunrise collections.

In 2003, the company launched a marketing campaign in print advertisements called “Part of You,” encouraging consumers to treat jewelry as part of one’s personality. Last month, the firm rolled out print ads featuring Kate Moss in honor of the anniversary, but pulled them when images of Moss allegedly using cocaine appeared in tabloids. Stern is working on a new campaign to bow next year.

The company also launched the Star collection, which is what “Stern” means in German. The small collection comprises rock crystal jewelry with a Gothic starburst motif embedded with diamonds in styles such as a collar, long earrings culminating with the star and massive cocktail rings of amethyst with a diamond-laden starburst shining through from beneath.

In honor of its anniversary, H.Stern outlined these goals:

“It’s in our DNA to look for inspiration in other realms outside the jewelry industry,” Ronaldo Stern said. “Jewelers are by tradition reactive to trends and we are a proactive brand as far as design and marketing. What we are celebrating this year is the momentum of the brand here and abroad — how much my father has done for our business and for the industry in his time, especially considering that he runs a privately owned business while so many of our competitors have been sold and become part of a huge corporation.

“We also celebrate the fact that people, celebrities, trendsetters and opinion leaders worldwide continue to encourage us to do what we do because they really think we are a unique company with a very unique product.”