Trying to make it in Hollywood is like playing the lottery, and Haley Bennett has won big. 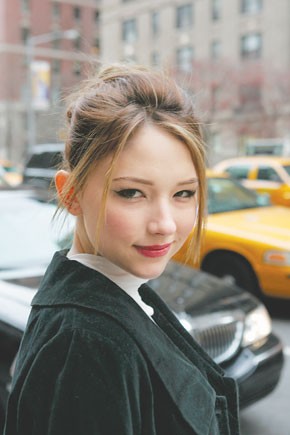 NEW YORK — Trying to make it in Hollywood is like playing the lottery, and Haley Bennett has won big. For her first movie role, the 19-year-old stars alongside Drew Barrymore and Hugh Grant in “Music and Lyrics,” as pop-tart sensation Cora Corman.

“I’m pretty stoked about it all,” admits Bennett over a late lunch of tomato soup and grilled cheese at the Regency Hotel. “It’s something I always dreamed of.”

A native of Naples, Fla.— “The only town in America with two Ritzes,” she notes — Bennett moved to Los Angeles during her senior year of high school, lured by a music producer on the promise of recording an album. But what could have been just another story of false hope turned into a real-life fairy tale when she won the role of Cora.

“It’s really weird,” she remembers of the nerve-wracking audition process, which went through seven rounds. “When it got down to the get-down, I was up against two other girls, and I was the last to go every day.

“You go into an empty room,” she continues, “And there are five people looking at you — Drew, Hugh, the director, the producer, the casting agent — and no furniture. I started crying and walked out and then walked back in.”

The aspiring musician performed her own songs and “was the only one who had prepared a dance,” she says with a dimpled smile. “It was so bad that when I got the part, they sent me straight to the choreographer.”

Perhaps it was her unpolished performance that won over writer-director Marc Lawrence (who also directed “Two Weeks Notice” and “Miss Congeniality”). “I thought that the role of Cora would be the easiest to cast,” he says. “But it was the hardest and the last. You’d think it would be easy to cast a Britney Spears-type character, but all the girls we saw seemed like they went to diva finishing school.”

It’s clear Bennett still hasn’t learned the ways of young Hollywood’s tabloid sensations, though “I have my wild side,” she avows. “I go out — just not a lot.” Indeed, for someone so normal — she lives with two roommates, loves vintage shopping and My Chemical Romance and offers to split her sandwich — Cora’s “spacey” behavior pained her. “I was happy they made her likable in the end. She was sort of demonic in parts,” says Bennett, before pointing out that, fittingly, a reel of Britney Spears is playing on the hotel’s television.

This story first appeared in the February 15, 2007 issue of WWD. Subscribe Today.

“It’s like me in the movie,” she laughs. “That whole persona and idea — it’s so funny. I was cracking up after every take.”

But she found out that becoming a pop star is hard work — especially since Bennett improbably suffers from stage fright (“my whole chest would break out in hives”) and she had to learn complex dance numbers. However, “I kicked my a–,” she says — and did everything from three hours of dance practice a day and losing 15 pounds on a nutritionist-ordained diet that deprived her of her beloved pizza to donning costumes so skimpy she cried when she saw them.

It was worth it — her family was “all ecstatic,” she says. “A lot more came to the premieres than were supposed to.”

Bennett has more than her extended family as an entourage these days. Her “Hollywood people” include an agent, a manager, an attorney, a publicist and a high-powered stylist, Jessica Paster. “I don’t know how it happened. And I know I have a lot of catching up to do,” she says. “I wasn’t a child actor and I wasn’t born into a Hollywood family. I’m kind of throwing myself into the fire.”

For now, Bennett has one simple goal: “I want to go to Europe. I’ve never been out of the country,” she says. “And it’s going to make a big difference when I do.”