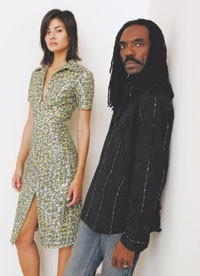 LOS ANGELES — With a loyal (and famous) clientele and support from specialty boutiques, two former creative directors for Halston are showing attendees at Mercedes-Benz Fashion Week at Smashbox Studios next week that there’s more to this town than contemporary wear.

Kevan Hall
As Felicity Huffman clasped the Emmy trophy for best actress at last month’s televised ceremony, Kevan Hall had a hunch what awaited him. He knew what having his dress on a winning “Desperate Housewife” could mean the next day, as he showed the spring collection to buyers in New York. It wouldn’t be business as usual.

The phone, in fact, began ringing very early. Huffman was one of five stars Hall dressed that night. But a double whammy of a trophy and making best-dressed lists fueled 15 immediate orders for the same dress, in the same shade of rouge.

“It was the first one I pulled that I thought would be amazing on her,” Hall recalled this week, in final fittings for his show on Sunday, the opener at Smashbox and overseen by celebrity stylist Tod Hallman. Hall has since increased the collection. “This is a great opportunity to show more gowns for red-carpet consideration,” he admitted, with award season only months away.

Angela Bassett, Anjelica Huston and Angelina Jolie are among the better-known women, like Huffman, who have visited Hall at his creamy Beverly Boulevard atelier — appointed with a Jean-Michel Frank shagreen desk and chairs and which he opened in 2000, a year after leaving Halston. Dozens of others come each season, flying in from Chicago, San Francisco and Miami and ordering up to 30 looks at a time.

They also ordered looks from his signature fur line, launched for fall under license with Michael Pappas Furs. Among the 22 styles, some highly embellished in crystals and embroidery, are Swakara lambskin, sheared mink and Rex rabbit.

Hall travels year-round hosting trunk shows, and a week after Sunday’s show, he’s off again to Neiman Marcus doors and several of the boutiques accounting for the bulk of his business, including Mary Jane Denzer in White Plains, N.Y., and Sophy Curson in Philadelphia.

On Sunday, besides new gowns in a show that nods to the lost city of Atlantis, Hall will introduce linen suitings and separates and embellished T-shirts. The tailored tops could become his second licensing deal. “I love taking iconic American staples like a T-shirt or shirt dress,” said Hall, “and turning them into something superluxurious.”

Bradley Bayou
Bradley Bayou is standing at yard’s edge at his latest Hollywood Hills home, overlooking the city that the bigger-than-life Texas native adopted more than two decades ago.
“I’m from L.A., so it only makes sense that I would launch here,” insisted Bayou, about his presentation Wednesday introducing his signature collection, his newest since parting with Halston in February after two years. “I did my run there. It was time to go,” he said.

Bayou arrived here in the early Eighties as a fine arts painter, interrupting a career renovating homes. By decade’s end, a line of painted vests ended up in Neiman Marcus and Barneys New York and career number three was under way. Since then, Bayou has merged them all (22 houses and counting) and added TV personality. Repeats of “Operation Style,” which he hosted before joining Halston, still run daily on Lifetime.

He hasn’t given up the idea of returning to TV — as long as it involves what he loves most: being a designer.

Seventh on Sixth, the body behind fashion week at Smashbox, approached him this summer with an offer for marquee sponsor Mercedes-Benz to underwrite the debut.

His production staff, a team that formerly worked for James Galanos, realizes his custom looks for day and night. All, not surprisingly, are based on his other passion, architecture. “It’s really about personal architecture. And everybody is a different structure. Construction and function is what it’s always been for me, and ensuring a woman is really comfortable is above all else.”

Specifically on the red carpet, he noted. Halle Berry, Oprah Winfrey and Geena Davis are among his faithful.

When asked about manufacturing ready-to-wear, he declined to elaborate — but hinted he was in talks. “I may be touting my horn, but I think I’ve come into my own now. And I’m enjoying it.”