PARIS — Don’t have an Hermès accessory named after you yet?

To be sure, it’s a rarified honor anointing the glamorous, including Grace Kelly, the late actress and princess, and Jane Birkin, the cult singer and... 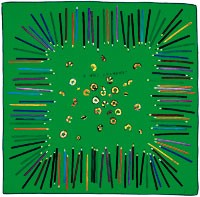 PARIS — Don’t have an Hermès accessory named after you yet?

To be sure, it’s a rarified honor anointing the glamorous, including Grace Kelly, the late actress and princess, and Jane Birkin, the cult singer and actress.

But lesser-known souls have also been enshrined in some of the most coveted and expensive leather goods in the world: Constance, a squarish bag with an H buckle named after the Figaro Madame journalist who designed it, and the Lakis, a version of the Kelly named after the man — yes, a man — who placed a special order a few years back that called for handy external zippers and pockets.

Indeed, the history of Hermès accessories is one of teamwork, as scores of design talents from within and outside the company have contributed to its enduring success — and notorious waiting lists.

The latest to offer his imprint is couturier Jean Paul Gaultier. While officially in charge of women’s ready-to-wear, he couldn’t resist tinkering with the house’s star classics: shrinking the Kelly to a chic clutch and warping the Birkin into panoramic proportions — squatter, but longer, and toted by none other than supermodel Linda Evangelista on the catwalk.

Even the reclusive, mysterious Martin Margiela, whom Gaultier succeeded, left a legacy of new Hermès classics, including the much-copied double-length watch strap, a twice-around-the-waist belt and a handbag dubbed the MM, still available for custom order.

Of course, members of the founding family have always acted as the ultimate tastemakers, unifying the look of a brand founded in 1837 as a harness maker. Chairman Jean-Louis Dumas does the honors now, unifying 14 categories of products spanning items from fragrance to tableware. Insiders say his door is always open to ideas.

“It’s more a community of creative people that can propose different things to Jean-Louis,” said Stephane Wargnier, Hermès’ corporate communications director. “The divisions are not so clear.”

An obsession with quality — it takes as long as 25 hours to make a Birkin, for example — and a reputation for simplicity also unites the company’s stable of products. “Functionality has always been important,” Wargnier said.

To wit: It was Birkin who suggested to Dumas 20 years ago that his large travel bag with a belt-strap closure would make a great, chic and useful style for women if it was downsized.

Simplicity is another virtue chez Hermès. The architect Le Corbusier, famous for his battle against unnecessary ornamentation, praised the rather stark and humble bags Hermès turned out in the Twenties and Thirties. They, like many Hermès accessories, sprang from the world of saddles, with the prominent hand stitching that is now a signature.

Bags and luggage remain the backbone of the business, accounting for 38 percent of its $1.5 billion (1.23 billion euros) in sales last year. Scarves, pulling in 11 percent of revenues last year, are arguably the runner-up as house emblem.

Who could miss them, wrapped babushka-style around the head of Jacqueline Onassis, or cradling the broken arm of Grace Kelly? Since launching the silk twill squares in 1937, Hermès has turned out almost 1,000 designs, perhaps the most enduring being the Brides de gala, depicting one of the most elaborate harnesses imaginable.

Often, the squares portray, in colorful fashion, the annual theme of Hermès — the Year of the Mediterranean in 2003, the quirky Year of the Hand in 2002. But they also express the lighthearted and playful nature of Dumas himself. For Christmas, one shows the Paris flagship on chic Faubourg Saint-Honoré trapped in a souvenir snow globe.

The Eva scarf, introduced in 1976 and relaunched in 2002, has a design that resembles human hair — blonde or blue — encircled with a crown of flowers. It’s waterproof, of course. Function reins at Hermès.

The horses have also stampeded into the jewelry department. The buckles found on harnesses inspired the Hermès bauble, a bracelet in leather and silver created in 1927.

Even the nails used to drive in horseshoes have been inspirational fodder to jewelry designer Pierre Hardy who, in true Hermès all-hands-on-deck style, moonlights in the shoe department.