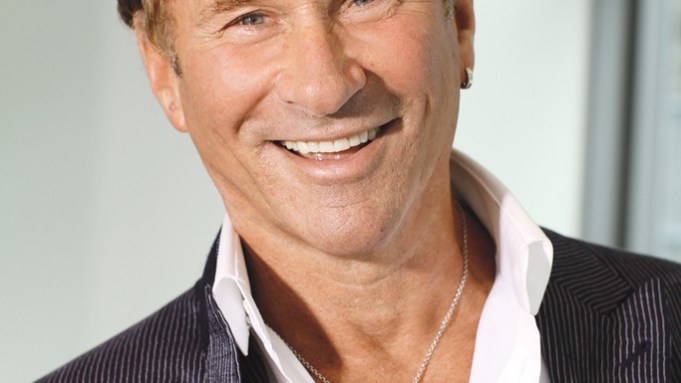 NEW YORK — When it comes to his personal style, Hal Rubenstein is loyal to his look: jacket, shirt and jeans teamed with statement-making jewelry, like stacked bracelets and bold rings including his bar mitzvah ring and his signature thumb ring. And always cowboy boots, preferably by Lucchese or Tony Lama.

His belief in the power of personal style is the foundation of Rubenstein’s next act: fashion designer. Next month, the writer, magazine editor, author, passionate foodie and opinionated talking head will unveil a namesake apparel and footwear collection for HSN.

“Hal is an expert in the fashion editorial industry,” said Anne Martin Vachon, HSN’s chief merchandising officer, who worked closely with Rubenstein on the launch. “He is loved by the consumer and is known for counseling women on all things style. At HSN we focus on delivering entertainment, inspiration, personalities and industry experts to provide an entirely unique shopping experience for our customers. With Hal’s background, he was a natural fit.”

It took a while for Rubenstein to rev up the courage to make the leap from writing about clothes to designing them. HSN Inc. chief executive officer Mindy Grossman, whom Rubenstein has known socially for some time, would periodically bring up the idea, but at the time, he was still the full-time fashion director at InStyle (he is also a founding editor of the magazine).

“You can’t do that when you work on staff at a publication,” Rubenstein said sitting in HSN’s light-filled offices in Midtown Manhattan. “I loved my job so it wasn’t an issue, but this kept coming up. I started thinking about separating myself from the day-to-day activities at the magazine, to start new projects and new challenges.”

An editor at large at InStyle since October, he also consults for several companies and brands, including Coach, Neiman Marcus, Giorgio Armani and American Express.

When, at one point, Rubenstein and Tommy Hilfiger started exploring the idea of doing a television show, Hilfiger arranged a meeting with executives from HSN, as well as Mark Locks, ceo of Tiger J. The company manufactures HSN collections for Giuliana Rancic and Queen Latifah, for example, and lines for the likes of Dennis Basso and the Kardashian clan for QVC. Rubenstein had his opinions on how clothes were being presented and sold on television.

“I have a very clear image of how I see women, and I felt that the clothes on TV, unfortunately, played into a woman’s insecurity,” he said. “A lot of women over the age of 35 feel that fashion is either not for them or that they should basically cover up what they think are their flaws and do the best they can.”

Missing “was something we did at InStyle from the very beginning: The sense that ‘You can do this’ and ‘Why not always present your best self?’ I have spent the last 20 years talking to women, women of all ages and all economic levels, shapes and sizes. I find women fascinating. I think they’re smarter, more pragmatic, better organized. I think they’re physically stronger than men.”

But all too often, he noted, women are also their harshest critics. “Every morning, a woman looks in the mirror and sees the five things she doesn’t like about herself, and she gets dressed from that point of view,” he said. “I’ve worked with women and this is all I hear. ‘My shoulders are too round.’ ‘My breasts are too low.’ ‘My calves are too small.’ ‘My feet are too wide.’ ‘My knees aren’t pretty and my fingers are stubby.’ The litany goes on and on. I am not buying it. There are seven billion people in this world, which means there are 3.5 billion women. And when she gets up and looks in the mirror, wouldn’t it be cooler if she realized that out of the 3.5 billion women, not a single one of them sees the same reflection she sees? No one has your face. No one has your experiences. No one has your life. No one has the people around you who love you. So, in other words, there is no one else like you in the world.”

Hilfiger and Locks were so impressed by Rubenstein’s passion that they encouraged him to start his own line.

The clothes and shoes, made by Tiger J and Fortune Footwear, respectively, celebrate the values the newly minted designer is so passionate about. With a focus on leather details, key pieces for fall include an animal-pattern coat with leather side panels, a faux fur vest, an asymmetric dress with a lace shoulder and sleeve, and red pumps with black lace overlay and bow detail.

HSN’s Martin Vachon described Rubenstein’s collection as “beautifully tailored clothes in comfortable, caressable fabrics, offered in a prism of flattering colors. These are clothes that women will want to own and collect and feel good about purchasing and will enhance her own individual style.”

As Rubenstein put it, “My mother always said, ‘We should leave the house expecting to run into somebody we went to high school with.’”

For the designer, the collection is deeply personal in more ways than one. Rubenstein’s mother and the “amazing” women he grew up with were a big inspiration when it came to designing. “My mother’s the best teacher I ever had,” he said. “My sister’s my best friend. My grandmother was a seamstress. She lived with us and there was a sewing machine going all day long. I was taught to sew at a very young age. I designed costumes in college. And I found these women endlessly fascinating.

My mother was a handsome woman,” he added. “My father thought my mother was Elizabeth Taylor, Doris Day, Marilyn Monroe and Julia Roberts rolled into one. He just adored her, but she was very self-conscious. It took her years to realize how much fun it would be to get dressed and to see herself the way that he saw her. And that’s my goal.”

While Martin Vachon declined to disclose sales projections, she noted, “We invest in building brands. The possibilities for Hal’s line are endless. He has a multitude of expertise, and his philosophy of inspiring women to celebrate their individuality will truly resonate with our customer.”

Rubenstein is simultaneously launching his own editorial site, halrubenstein.com, which is separate from HSN. The site will feature such recurring features as “Haute Hal,” “Hungry Hal” and “Headstrong Hal,” via which he will opine on everything from fashion to food, the latter of which he calls his “first love.” (He was a longtime restaurant critic at New York magazine.) “I don’t get to wear the clothes that I’m designing, but food is something I do. I love food. I cook like crazy. I think it’s something that people are excited about.” There will also be features on his philanthropy. Rubenstein supports such organizations as Live Out Loud, which connects lesbian, gay, bisexual and transgender youth to role models and leaders in the LGBT community, as well as One Heartland, specifically its Camp Heartland program for children with HIV and their caretakers. It’s a cause he is deeply devoted to with much personal meaning. Rubenstein said he has been HIV positive for more than two-and-a-half decades, and the reality impacts his daily outlook and accounts for his fearlessness to try new ventures. He also gives to Standing Tall, the Upper West Side school for children with neuromotor disorders.

In addition, Rubenstein is putting the finishing touches on his second book with HarperCollins “about great moments in romance and how these moments in TV, movies, popular culture, politics changed the way we’ve looked at love, sex, revenge, birth, life, death.”

Despite his lack of formal design training, Rubenstein maintains that years in editorial provide sufficient street cred for his HSN endeavor. Still, he’s careful to distinguish confidence from hubris. “Narciso [Rodriguez] and Raf [Simons] and Jack [McCollough] and Lazaro [Hernandez] won’t have to sit up, biting their nails over me,” he said. “These are clothes that will work in your life. Let me put it this way: I don’t see myself ever doing a runway show. I have enormous respect for people like Karl Lagerfeld and Mr. Armani and Narciso and my late, great friend Mr. Versace. What a blessing to be in an industry so surrounded by creativity. I’m not doing fashion. I’m making clothes.”