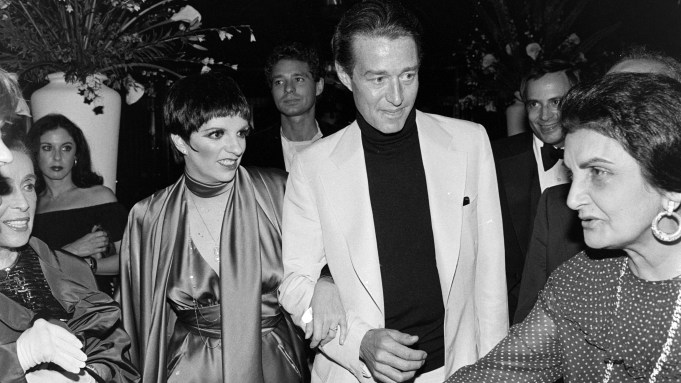 Netflix’s “Halston” limited series gave an in-depth look at many facets of the iconic fashion designer’s life, including how he built his fashion empire, his Studio 54 days and his close friendships with his many muses.

Among the muses the Netflix series portrayed, one that has stood out for many viewers is actress and singer Liza Minnelli.

Halston and Minnelli’s friendship spanned most of his career and continued even after Halston was ousted from his own design company. The duo also became Studio 54 regulars, and Minnelli was a frequent guest at Halston’s infamous house parties at his Upper East Side town home.

Minnelli, the daughter of actress Judy Garland and director Vincente Minnelli, was introduced to Halston by her godmother, actress Kay Thompson, in the late 1960s after Minnelli was drawn to one of Halston’s designs, a sweater and pants set, she saw on a shopping trip at Bloomingdale’s.

“We got along instantly, and he became my fashion mate,” Minnelli said about the meeting in a 2011 interview with Harper’s Bazaar. “I did what he said. He really took care of me.”

The pair was inseparable during the 1970s and 1980s, attending many events together, often partying at Studio 54 and traveling internationally.

“I met him when I was 20,” Minnelli told WWD in a 1990 interview. “From that time, I never did a show or went to a party — or threw one — without him guiding me. Every show I did, I performed in his living room first. In him there was tastefulness, style and simplicity.”

Minnelli also talked about their meeting in the CNN 2019 documentary, “Halston,” stating: “When I met Halston, I just remember him talking and me listening. He’d say, ‘Alright, I got it.’ He put [a look] on you, and it danced with you. His clothes danced with you. We were joined at the hip from then on.”

Halston is credited with forming Minnelli’s style and was reportedly responsible for her signature pixie-cut hairstyle. She regularly wore Halston’s designs for her high-profile appearances, including when she picked up an Oscar for best actress in “Cabaret” in 1973 dressed in a bright yellow dress and sweater.

“It was like a T-shirt collar to the ground, straight down, and a sweater made of crepe, same as the dress,” Minnelli said about the Oscars look in a 2020 Variety interview. “My father’s favorite color was yellow and I wore that and jewelry that Halston had picked for me for the night. I said to my dad, ‘Do I look alright?’ he said, ‘You look perfect because you’re not overdressed and you’re not underdressed.”

Halston dressed Minnelli both onstage and off. He was also an uncredited costumer on her film “Cabaret.”

According to actress Krysta Rodriguez, who plays Minnelli in the Netflix series, in an interview with Vanity Fair, Halston designed the “Cabaret” costumes after Minnelli told him she didn’t like the costumes that were already made for her.

“They sharpened each other as friends and collaborators,” Rodriguez said. “Ultimately, [they] were each other’s greatest love.”

Minnelli credits Halston with developing her interest in fashion, and had said he was like a father figure to her.

“He was like my dad in a way because when I was a little girl, my father would give me five costumes every year,” Minnelli said in the CNN documentary. “It was a dress from ‘An American in Paris,’ and perfectly made, exactly like for the ladies, and I guess I got into appreciating how clothes could change the way you felt.”

The duo was mutually supportive of each other’s careers. Minnelli was there for Halston during one of the most pivotal moments of his career: at the WWD-dubbed “Battle of Versailles.” At the “battle,” Halston joined fellow U.S.-based fashion designers, Oscar de la Renta, Anne Klein, Bill Blass and Stephen Burrows, in a showdown against five French fashion designers. Minnelli performed “Bonjour Paris!” onstage as Halston presented his styles.

“American designers had never been invited to show in Paris, and this was a huge deal,” Minnelli said about the event during the CNN documentary. “All the energy and the joy and the wonder and curiosity, well that is America. At the end of Halston’s piece, they threw their programs up in the air. They went bananas.”

Halston infamously had a meltdown during the “Battle of Versailles,” demanding the show be canceled after he got into a disagreement with his choreographer. It was reported that Minnelli was able to calm the designer down, and the show went forward.

Halston and Minnelli were Studio 54 regulars, joining their other famous friends like Bianca Jagger, Anjelica Huston and other Halstonettes. Minnelli was also a regular at Halston’s house parties, which also saw the likes of Andy Warhol, Truman Capote and Elsa Peretti in attendance.

After Halston was ousted from his company and barred from designing under his own name in 1984, he continued creating custom designs for Minnelli, including much of her stage costumes. He continued to design for her until his death in 1990 from AIDS-related cancer, Kaposi’s sarcoma.

Minnelli’s support for Halston has been unwavering since his death and she has also been part of efforts to revitalize his brand. She sat front row at the first Halston fashion show in 2008 after the brand was temporarily revived by disgraced former film producer Harvey Weinstein, Jimmy Choo cofounder Tamara Mellon and stylist Rachel Zoe.

Following his death, Minnelli hosted a memorial service on June 6, 1990, which marked the launch of the Halston Fund for AIDS at the Medical Research Institute of San Francisco.

“He was like a big brother to me and a lot of women,” Minnelli told WWD. “Remember his quote, ‘You are only as good as the people you dress?’ Well, he dressed some great people and he had some great, great friends.”

Minnelli’s support extends to the legacy of Halston. She has regularly refused to speak ill of him or emphasize his partying or drug habits that were widely reported on.

“It’s very hard to do an interview about your best friend, especially if what’s popular at that day and age is digging a little,” Minnelli said in the CNN documentary. “I don’t like it. I hated it when they did it to my mother, or my father or myself. And I won’t do it to Halston. I just won’t. I refuse.”

Inside the Costumes of Netflix’s ‘Halston’

Life After Halston: A Look at Halston’s Closes Friends and Partners