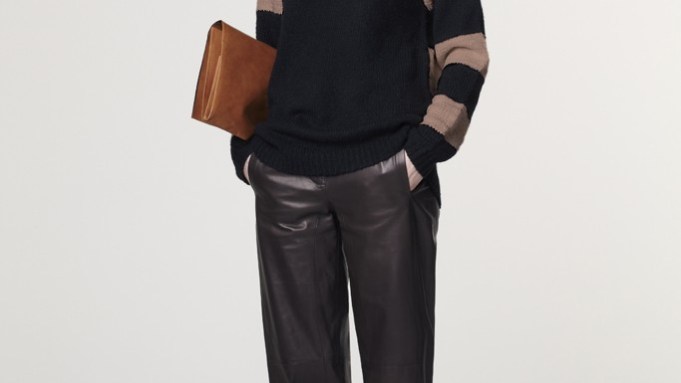 Malka has spent the last seven months assembling a team of executives and designers, including chief creative officer Marie Mazelis, who followed him from BCBG Max Azria Group, where he served as president for over a decade. Their aim is to steer the brand into the future, beginning with an overhaul of the contemporary Halston Heritage line, which will be presented to buyers in the company’s 8,000-square-foot showroom in New York’s SoHo on Wednesday. The Halston runway collection is set to debut for fall 2013.

Walking through the spotless, 25,000-square-foot space that houses executive offices, print and patternmakers, the design team and customer service, Malka said he promised his wife he’d retire at 50, but less than a week after leaving BCBG, he got an offer from Halston backer Hilco Consumer Capital LLC that he couldn’t refuse. “There were maybe two or three brands that could pull me out of retirement, and this was one,” he said. “But it had to be all about the way I run it. No outside interference.”

Strong liquidity was also a must. Malka became the largest of three shareholders in the company; Hilco and a silent investor serve as passive partners while he makes all operational decisions. “We are very well-funded, so I don’t have to worry about that. The money was put in by myself and my partners in a big way,” he said. While he demurred on the amount of his stake, he quipped, “The amount is enough for us to screw up for a long time.”

But there’s no joking when it comes to how he’s running the 70-person company. A glance at his four-year plan shows worldwide wholesale distribution targets calculated to the last dollar, a timeline for brand extensions, and renderings of retail stores. From the company’s “peace and love” training program to an employee manual specifying the font of e-mail signatures, no detail has been overlooked.

“A lot of people ask, ‘What are you going to do differently from all these other people?’ I reverse engineered it. We started with funding. Then my objective was to assemble a team of innovators from around the world. I think the past is wonderful to learn from, but whatever we are doing now should be with the future in mind. I think if Halston were here today, he would be very pleased.”

He chose L.A. as headquarters because “the Heritage line, which we are starting with, is contemporary and obviously this is the place for that. It’s also a global city and a brand like this belongs here. I think it will be a boon to the Los Angeles fashion community.” Malka added that the runway line will be based in a New York atelier that’s still being constructed.

“I want to create a strong differentiation between the two,” he said, noting that the brand’s range was made possible by the “hundreds of DNA codes” in the late designer’s legacy. “Halston [runway] is about innovation in technique and fabric. It’s about exclusivity and luxury. Heritage is about making the brand more accessible using timeless codes like fluidity and tailoring.

“I think getting it from concept to floor is the most difficult thing to do. But that’s the key to shaping the future,” he added.

“I would say beautiful positioning with trained associates is the number-one way to reach our consumer and reimmerse them in the brand,” he said. For now, he’s referring to shop-in-shops in stores like Bloomingdale’s and Harrods, but he said the company could open five freestanding retail stores in the U.S. this year. The design will include a version of the floating staircase in the late designer’s iconic townhouse to ballet barres for clothing rods, a nod to Halston’s dance-inspired looks. Cash wraps will contain mini museums with iconic photos of moments in Halston’s history.

The second objective is utilizing social media. “I’m a big fan of what Burberry did. Just the fact they have the largest Facebook following of any brand means they did a lot of things right, and that’s something we are aspiring to do.”

Then there’s the celebrity factor. “Halston was one of the pioneers of marrying fashion and celebrity. I value that enormously. Celebrities are incredible ambassadors and we will be making some thoughtful choices after market,” said Malka, declining to reveal details.

While Heritage is already distributed in Bergdorf Goodman, Neiman Marcus, Saks Fifth Avenue, Intermix and Scoop, as well as 300 retailers in Europe, Malka is hoping to increase its reach with Mazelis’ revamped collection.

Flipping through line sheets from summer to fall, it’s clear there’s a greater sense of design and sophistication in the collection. Key pieces include a draped boiled wool mock turtleneck shift dress paired with a long blazer, an updated version of the ultrasuede shirtdress and another Halston signature, the double-faced cashmere coat.

“I wasn’t looking to reinterpret our archives,” said Mazelis. “I thought about the woman who wore Halston then, and what she would be like today. Women’s lives are so busy now that I wanted it to be about ease, sensuality and confidence.”

During fall market, the company will also present handbags, small leather goods and belts. Footwear is set to bow for spring 2013, followed by jewelry and eyewear. Malka’s wife, Anita Jansens-Malka, who oversaw handbags at BCBG, now serves as senior vice president of handbags and accessories as well as executive vice president.

Most of the Heritage collection is priced from $50 to $500 wholesale, but there will be a handful of red-carpet and leather pieces priced up to $2,500. Handbags range from $175 to $500. Malka said he has not priced out the Halston runway collection yet, but he expects prices to be in the designer-luxury range, with some pieces up to $10,000.

While he declined to give first-year sales projections for Heritage, Malka said, “We have the name, the money, the team and the product. It’s an enormous opportunity. Halston is Halston. Anything that goes wrong can be fixed. For me this is about doing something we can all be proud of.”